MOSTLY FILM: Take It To The Bridge

I have an ongoing wanky photographic art project called Hotel Rooms 2014, featuring the door of every room I’ve paid money to stay in this year. The fact that it’s got so many entries on it so far is a testament to the amount of travelling my Moderately Responsible Job In The Computer Industry currently requires. I consider it quite a privilege that the people who pay the bills let me book my own hotels, so I make it a point of honour to get decent deals where possible.

Back in March and April of this year, I visited Denmark and Sweden on consecutive weeks. The two nations are famously connected by the Øresund Bridge: its structure is used to support the plotting of Scandi cop show The Bridge, and by extension it’s also the central metaphor at the heart of my latest Monoglot Movie Club piece for MostlyFilm. Take It To The Bridge reviews a film I saw on the Danish leg of the trip (Klassefesten 2) and a film I saw on the Swedish leg (Tommy), with the vague implication that the two will be compared and contrasted, even though that never actually happens.

What I will do, however, is use this Red Button Bonus Content piece to compare and contrast the hotels I stayed at in each country, as both of them were a little out of the ordinary. While we’re here, I’ll also throw in a few restaurant recommendations along the way. 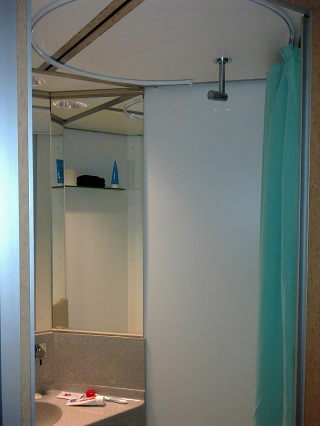 In both cases, I wasn’t based directly in the centre of the capital, but in a business area a little out of town. In the case of Denmark, I was living and working in Ørestad, which is perfectly positioned on a commuter rail line: five minutes away from the airport in one direction, ten minutes away from Copenhagen Central Station in the other. Ørestad is obviously aiming to be the next big Danish thing – lots of major companies have relocated to the district, there’s a huge Fields shopping mall at its centre (although it won’t have a cinema until 2015, so booooo), and its main hotel is as keen to push the  boundaries as everything else.

The key to the Cabinn Metro is in the name: the rooms (or at least the single room I was in) have been made as compact as humanly possible, like a cabin on a ship. In fact, it was very reminiscent of the cabins The Belated Birthday Girl and I occupied on our ferry to the Netherlands last Christmas, which I still haven’t told you about yet. (That particular piece has been delayed so much now, I’ve taken the decision to hold it back till next Christmas, when it might be of use to some people.) Aside from the tiny bedroom, the only other thing you get is a cross between a shower cubicle and a wet room: if it wasn’t for the curtain, most of the water from the shower would end up going into the toilet, and even then it’s a close thing.

Size isn’t the only way that economies are being made at the Cabinn. The in-room consumables are reduced to the bare minimum, just a single tiny bar of soap and a single tea bag, forcing me to make a trip to the Irma minimart over the road to stock up. The wi-fi is also somewhat erratic, at least in the rooms, and at one point I had to relocate in the middle of a Skype session to access the better quality signal in the ground floor lobby. But as long as you’re aware of those limitations, the room is terrific value for money, the price including a sizeable breakfast buffet.

The restaurant doesn’t do evening meals, so for dinner you’ll have to look elsewhere. Within walking distance you’ve got the aforementioned Fields shopping centre, which has a few decent self-explanatory eateries on its top floor like Bøfhus and Nachos. Otherwise, you’ll have to head into Copenhagen proper, like I did for my visit to the Palads cinema (which I last went to in 2007): of the central restaurants, the oversized pizzas at Il Peccato and the cheap 'n' cheerful fare at Thai Flavours worked well for me. As a fully paid-up beer ponce, I also popped into the Mikkeller bar in Viktoriagade for one of their fine stouts, made from coffee beans dug out of weasel shit. 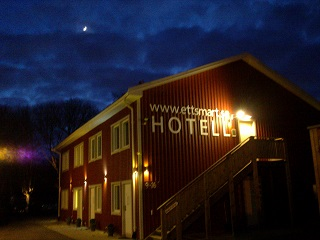 One week later, I was in Sweden. I’ve done a lot of work in Stockholm over the last year or so, largely based around the district of Solna. This particular assignment was a little further out of town in Sollentuna, which (like Solna) is handily positioned on the commuter rail line between the airport and the centre of town. Sollentuna has slightly more going for it than Solna, thanks to yet another gargantuan shopping mall, although one that’s curiously low on decent places to eat.

That’s okay, though, because this time I was in a hotel with a full restaurant attached. That was the only thing attached, though. Ett Smart Hotell bills itself as a different sort of hotel, and they certainly aren’t lying - apart from that restaurant, the whole thing is completely self-service. You don’t get a key: instead, on the day of arrival you’re sent a text message with a PIN code you can use to get into the building and your room. You don’t check in, or check out, as you’ve already paid for the room when you booked online. You may well never see another person the whole time you’re there, apart from in the restaurant. If that freaks you out, then feel free to go elsewhere: but like the Cabinn, this is a fiendish ploy to push overheads, and therefore room prices, through the floor.

The room is actually a pretty decent size, with a nice view out onto the trees that cover up the railway line in the distance. The in-room facilities are well maintained, including rock-solid wi-fi: though that might just be down to my being allocated a room next door to the router, located in a sweet communal kitchen area offering free tea and cooking facilities (a typically Swedish touch, I’ve found). And the restaurant downstairs offers a small but comprehensive buffet at breakfast, and the fine combination of Mexican snacks and craft beer at night when it turns into Latino Lounge.

One warning about Latino Lounge, though: it’s closed on Monday nights, which put a crimp in my first evening in town. There are a couple of other restaurants in Sollentuna, and I took that opportunity to check out the Texas Longhorn chain of steakhouses. (There's not much to be said about them: they're steakhouses.) My other evening meal of the week was near the Filmstaden Sergel, which has now been responsible for three Mostly Film articles if you include this one and this one. Most of the restaurants in that part of town are chains or low-budget fast food, and the mediocre pizza I had at the BarbeQue Steakhouse & Bar was at least better than another generic steak.

So if you're looking for things to do while waiting for the next season of The Bridge, you could always check some of the above places out. Maybe Kim Bodnia might want to consider them, now that he's got some time on his hands...