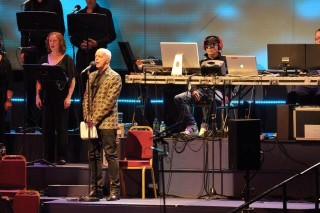 There are some people – Welshmen, mainly – who would have you believe that the idea of a Pet Shop Boys Prom is so unusual that it proves the existence of God. But to anyone familiar with Late Night Proms, it isn't that unusual at all. During each Proms season, there are several days where a second concert is held after the main one of the evening, venturing into musical genres either more commercial or more avant-garde than the usual fare. They're generally short and tightly programmed, and if you're lucky (as we were) you'll just make it out in time for your last train home.

The PSBProm, as it came to be hashtaggily titled, had a couple of curtainraisers before the main event. As the BBC Concert Orchestra was to hand, it seemed fitting to start the evening with the one full orchestral work in Tennant and Lowe's canon. Overture To Performance was originally the taped intro to the duo's 1991 show Performance, which I still consider one of the finest gigs I've ever attended: I loved its willingness to fill an arena-sized canvas with every visual idea they could think of, no matter how ludicrous. Overture is a medley of the hooklines from nine of their biggest hits, and would normally be the perfect beginning to a show like this. Unfortunately, just four days earlier I'd attended another show that opened with an orchestral overture of familiar songs, and I caught myself wondering if the orchestra was going to segue into Sit On My Face eventually.

The second part of the evening was another interesting use of the orchestra: four PSB songs rearranged by Angelo Badalamenti, and sung by Chrissie Hynde. This turned out to be a revelation and a slight disappointment all at the same time. The revelation came round about Vocal, which even the most rabid fan would admit isn't really a song at all, just a delivery system for two gigantic big-fish-little-fish-cardboard-box rave climaxes. But Badalamenti's arrangement and restructuring turns this wispy little thing into a genuinely fine piece of music. The other main element in the mix is Hynde's vocal, and this is where things start to go a little awry. The texture and tone of her voice are as glorious as ever, but when it comes to enunciating consonants she appears to have been taking lessons from Shane MacGowan. As a result, the words don't come across as clearly as they should, which is frustrating when this is being specifically presented as a suite of songs.

There's another problem highlighted when Neil Tennant joins Hynde to duet on Rent, in the arrangement previously familiar from Liza Minnelli's cover version. I don't believe that the phrase “Chrissie Hynde reminds me a bit of John Otway” has ever been used in any context before, so here goes. In the previously-reviewed Otway The Movie, there's a sequence of him rehearsing for his own Royal Albert Hall gig in 1998. Relishing the opportunity to put on a huge show, he hires the Aylesbury Youth Orchestra to back him on The Highwayman. The rehearsals fall to pieces before our eyes, as Otway slowly realises that rock singers aren't used to the discipline of keeping in time with an orchestra. Hynde and Tennant don't quite lose it to the same degree, but their sliding around in the boundaries between bars keeps you on edge for the whole song.

Still, it's enough to get us in the mood for A Man From The Future, a new 45-minute piece celebrating the life of Alan Turing. What with the centenary of his birth in 2012, not to mention the recent official re-assessment of his life, the World War II codebreaker and father of the modern computer is back in the public eye again. Just this week it was announced that a new biographical film, The Imitation Game, will be this year's London Film Festival Opening Gala. However, concerns have been raised that a fundamental element of Turing's character – his homosexuality – is going to be downplayed in the film.

This isn't the case with AMFTF: in its devastating final minutes, it lays out an explanation of its title in the most unambiguous way possible. “A man from the future, Alan had imagined a world with intelligent computers, where homosexual life is normal.” To Tennant and Lowe – and biographer Andrew Hodges, who provided the text for the piece – you can't separate one from the other. The nature of his life informed his work: his work was ultimately terminated by society's horrific reaction to his life.

Structured like a good old-fashioned concept album, AMFTF consists of a series of excerpts from Hodges' biography of Turing, read on the night by Juliet Stephenson from inside a soundproof booth (which The Belated Birthday Girl thinks was styled to look like one of the Bletchley Park huts where Turing worked). Key phrases from the reading are then sung and expanded upon by the choir, to a backing that subtly mixes the orchestra with Chris Lowe's electronic contributions. It's a perfectly fine structure as far as it goes, but it means that one of the Pet Shop Boys' key strengths – their melodic sense – isn't really exploited here. Overture To Performance reminds you that for a dance band, the PSBs have always had outstanding tunes to go with the beats. The short phrases that are the building blocks for AMFTF don't really give them the chance to take a melody and make it soar.

For most of the piece, the music works just fine as a soundtrack to a reading, but doesn't really contribute much more than that. And then as the final tragic act of Turing's life unfolds, that all changes. The music has to do some complex things at the end: there's a sense of joy that Turing's been vindicated with a royal pardon, but undercut with anger that the countless other men persecuted for similar behaviour haven't received the same treatment. The climax manages to achieve this beautifully, performing a balancing act between Stevenson's understated narration, a choral arrangement of the pardon itself, and archive audio of Gordon Brown's apology.

A Man From The Future didn't really grab me emotionally until its climax, and I'm prepared to believe that my reaction is simply down to only having heard it once. It's quite possible that the heavy focus on its narrative means that its melodic pleasures may take a couple of listens to become fully apparent. Well, thanks to the unique way in which the BBC is funded and all that, at least I have that opportunity: because Prom number 8 is available to hear again online until August 22nd or thereabouts. And if you didn't hear it the first time, maybe that just means you need to click that link one time more than I do.