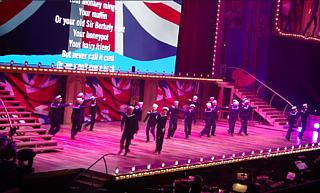 Let's be honest, nobody had particularly high expectations for Monty Python Live (mostly) when it was first mooted in late 2013. Even by the standards of a team whose finest hour on vinyl was the self-explanatory Monty Python's Contractual Obligation Album, there was something incredibly cynical about their decision to put on a series of arena-sized reunion shows, announced just a few months after they discovered that they owed Mark Forstater shitloads of money. With the level of admission prices you get at the O2 arena, plus my own personal qualms about staging comedy in a room that size, I politely stood back and let everybody else rush for tickets.

But as we got closer and closer to the show date, the expectations started to rise. Word got out that Eric Idle was bringing a little of the Broadway pizazz of the original Spamalot to the show, and that intrigued me. Python was never really about the grand gesture: the films had their moments of visual ambition here and there, but all the moments everyone loves involve two or more people just talking nonsense at each other. That sort of material could be destroyed by pumping it up to fill a twenty-thousand seat venue, but interweaving it with large production numbers could be just the thing to make it work.

So by the time July 20th rolled round - the date of the final show in a run of ten - I'd already committed the full eighteen quid admission fee to be at the O2 for that night. Not in the venue, you understand: tickets for that were a hell of a lot more expensive. But by then, interest in these shows had grown so much that they'd arranged for the last one to be broadcast live into cinemas across the world. And the O2 has a Cineworld cinema inside the complex. If this night was meant to be a global celebration of the absurd, I could think of no better way of contributing to that absurdity by watching a show being relayed direct by satellite from about a hundred metres away. (Although irritatingly, once I'd bought the tickets it was then announced they were also going to be showing the whole thing for free on Gold TV. Well, they said the whole thing, but... well, you'll see.)

We ended up getting the best of both worlds. We got all the huge crowd atmosphere before and after the show, including a chance to gawp at the overpriced merchandise (ten pounds for a 'Gumby hat', i.e. a knotted hanky with the show logo printed on it). But when we watched the show on a big screen, we were doing it by choice, not because we had seats too far away from the stage. We were seeing it with a much smaller audience, but they were a happily enthusiastic one, hitting their maximum volume level on the odd occasions where the sound cut out for three or four seconds at a time.

As for the show itself: as expected, the expansion of this material from drawing-room sketches to arena-sized spectacle means that Eric Idle's pawprints are all over it. What we end up with is a series of sketches played on small, moveable sets, interspersed with huge song-and-dance numbers that take up the entire stage. The contrast between the two approaches is at its most spectacular early on, where Idle's Noel Coward pastiche Penis Song segues into a hugely expanded version for a massed chorus of sailors, featuring additional verses about vaginas and bottoms. The former, in particular, distracted me from the show for a few seconds - it's the most explosively filthy bit of the whole night, and it left me wondering how the TV audience at home was taking it. (Answer: they weren't - in the telly transmission on Gold, the whole number was replaced by a specially-filmed apology featuring Michael Palin as Mrs Middle Of The Film from The Meaning Of Life. If you're reading this early enough, Gold are doing a couple of uncut reruns of the show on Tuesday July 22nd and Friday July 25th.)

There have been complaints in some quarters about the frequent breaks between sketches for songs or pre-filmed material, but you'd have to be some sort of inhuman monster to find them a problem. Sketch comedy is a young man's game, particularly if you're performing sketches in costume. The Pythons are all over 70 now, and need as much time as you can give them to change from one skit to the next. Quite frankly, I'm amazed they all held up as well as they did. The biggest surprise of the night is just how committed everyone on stage is to having a good time (with the possible exception of Terry Jones, who was looking distressingly wobbly at times, but pushed on regardless). At one stage, John Cleese (as Ms Ann Elk) went into an exaggerated coughing fit that left me seriously worried that he would be the second member of the team to die.

The subtitle of this performance - One Down, Five To Go - acknowledges that he wouldn't be the first, and on several occasions the show pays tribute to their former colleague. The best one: the inevitable Parrot Sketch now includes a new euphemism for death, "expired and gone to meet Dr. Chapman." The hugely warm reaction this line gets is an illustration of two obvious truths about the show. Firstly, it's a greatest hits set - really, how could it be anything else? Secondly, even though these are lines virtually everyone in the audience knows by heart, we all laugh regardless, but we laugh even more whenever they go off-script. The camp judges discussing John Cleese's divorce history: Cleese ripping Terry Jones' cue cards out of his hand with a malicious grin: the sudden revelation that the parrot sketch has turned into a medley.

It's all over now, of course. And looking back at the overall reaction, there are no real surprises. If you didn't like Python before, you wouldn't like this show, but would presumably enjoy the money you got for writing arseholey contrarian articles about it for the Telegraph. If you liked Python, then it's a delightfully warm wrapup to a forty-five year career. Not so devastatingly brilliant that people will clamour for them to do endless re-reunion shows until another one really does die: not so terrible that our memories of what they did in their prime are tarnished. Just enough to keep us satisfied that they deserve a happy and peaceful retirement from here on in. Until the DVD comes out in November, of course...