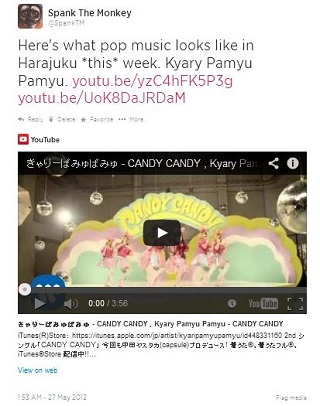 When Kyary's first album came out two years ago, it was a very different story: if you weren't in Japan at the time, you wouldn't have known about its existence at all. By happy coincidence, Pamyu Pamyu Revolution was released while The Belated Birthday Girl and I were on holiday in Tokyo, and its eye-catching poster campaign was enough to tempt me into first investigating the music online, and then buying the record. At the end of 2012, I wrote a big piece about Kyary for Mostly Film, noting that she appeared to have ambitions that went way beyond the Japanese coastline.

I didn't know the half of it. Kyary's videos regularly bust blocks on YouTube, with PonPonPon currently on 67 million hits and rising. She's now done two world tours, the second one bigger than the first, while still not quite capable of filling the arenas she does back home. And she's canny enough to find all sorts of other ways of keeping her face in the public eye - from an English language Facebook page, to a fortnightly arts programme called Moshi Moshi Nippon, watchable globally on NHK World TV or via internet streaming. She's an enjoyable enough TV host (it's a job she does regularly in Japan), but the show is made by her management company Asobi System, and at least four minutes of every episode is dedicated to blatant plugging of whatever she's doing this week.

Which brings us to her new album Pika Pika Fantajin: already available for digital download worldwide (as has been the case with most of her records), but with an accompanying CD release gradually rolling out over the next month - the UK gets it on July 21st. You could argue that there are no surprises here, as the format of this record is the same as that of the previous two albums (and the 2011 mini-album Moshi Moshi Harajuku that preceded them all). Once again, after a one-minute instrumental overture, we launch straight into a collection of songs all written and played by Yasutaka Nakata, with Kyary providing the vocals and the visual interest.

One thing that separates Pika Pika Fantajin from its predecessors is just how familiar those songs are, since nearly half of its tracks have been released previously. "It's packed full of singles," boasted Kyary in one of those promo slots on Moshi Moshi Nippon, even though that's a bit annoying for anyone who's already bought them. Happily, I haven't. The singles are largely clustered on the first half of the album, and they make for an exhilarating listen at the start: from the weapons-grade pop of Kira Kira Killer, to the more reflective Yumeno Hajima Ring Ring, in which Kyary ponders on what life holds for her now she's an ancient 21 years old.

The non-single tracks can vary a bit in quality. When Kyary's dabbling in unexpected styles - the grungey guitars of Serious Hitomi, or the plastic ceilidh of Sunngoi Aura - the results are delightful simply because they're such a deviation from the standard template. But some of the songs here feel a little too much like recycling old ideas for her new global audience. The most obvious example of this is Ring A Bell, the first song she's ever recorded entirely in English. It's a fairly basic piece about going to the studio and making a record, and leads you to the awkward suspicion that many of her other songs would sound this thin if you understood them. Nevertheless, Ring A Bell has some additional interest once you discover its part in Kyary's marketing masterplan - it's a promotional tie-in for a karaoke company, and there's an accompanying website where you're encouraged to upload your own performance of the song. (I haven't, so don't bother looking for me.)

There's one other track of interest here, because it's a cover version. Producer Yasutaka Nakata is also half of the J-pop duo capsule, and he's reworked an old track of theirs from 2005 for Kyary. do do pi do - capitalisation not their strong point, obviously - is a surprising choice because of its subject matter, which can be roughly summarised as "I want to look nice for my boyfriend, but chocolate exists, so sod him." I'm not sure, does that count as feminism? Either way, it's a rare chance to see what Kyary herself brings to a record: and compared with the deadpan delivery of capsule's Toshiko Koshijima, the Kyary version recognisably has the singer's personality stamped all over it - or at least, what we've come to think of as her personality, based on her records to date. (Meanwhile, The BBG notes that Nakata reworked the tune and subject matter into Candy Candy seven years later, which makes it an even more surprising choice as a cover version.)

It's a ballsy move to take a very Japanese artist and release her album worldwide. Sure, the stats for Kyary's YouTube account suggest there's a market out there, but knowing how many of them are willing to pay for her music is another matter. (After all, she's only played live to 2000 people in the UK so far.) Still, at my age Kyary Pamyu Pamyu will probably be the last music artist I can say I discovered before the rest of my friends, so I'm going to hang onto her while I still can. Let's see how her plans for world domination look when this site hits its 20th birthday. I'll get the furisode ready...