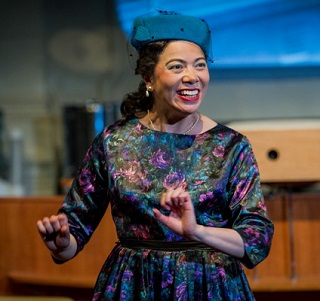 Full disclosure from the off: The Last Days Of Limehouse (running at Limehouse Town Hall until August 3rd) is written by Jeremy Tiang, an online acquaintance from the Guardian film talkboards and a fellow writer at Mostly Film. If Europe's Best Website wasn't so keen on maintaining a veneer of professionalism, this review could well have been running there. As I can barely spell the word proffesionalism, I'm happy to announce here that I know the playwright personally, and that his play's a fine piece of work, and that I don't care if you believe me or not, but you should.

The year is 1958, and Eileen Cunningham (Amanda Maud) has returned to Limehouse, the old London Chinatown district where she was born. She's been away in the US for some time, and is horrified to discover that an intensive process of gentrification is underway: in a couple of years, there may be no trace left of the largest Chinese community in London. With the years of organisational experience she's acquired in America, she decides it's up to her to do something about that.

It's a well-worn narrative framework: a piece of history is under threat, and it'll take a race against time to save it against implacable opposition. What makes TLDOL unusual is the identity of Eileen's opposition: everyone else in Limehouse. Whether it's restaurant owners Johnny and Iris Wong (Matthew Leonhart and Gabby Wong), or Earls Court evacuee Mary Cheah (Sara Houghton), the Chinese residents can only see the upside of the bulldozers moving in. What were originally intended as temporary dwellings are now slums, and their inhabitants have been promised new digs elsewhere: why should they turn down an offer like that?

In a post-performance Q&A last week, Jeremy revealed that at one point there were plans to stage the play on the streets of Limehouse itself, in the locations mentioned in the text. There's a reason why this was ultimately rejected, which is technically a spoiler for the play - those locations, fifty-six years later, are almost entirely devoid of any evidence of Chinese settlement, just as Eileen predicted. Instead, the play is being performed as a promenade production within the cavernous main room of the old Limehouse Town Hall, which is where a key part of the narrative takes place.

There's a danger sometimes with site-specific drama that the site takes precedence over the drama, but that's far from the case here. The story is a powerful one already, which gains additional resonance from being staged in this particular room, but it would also work well in a more traditional staging (if anyone's considering picking it up for a transfer at the end of the run). Having said that, directors Gary Merry and Kumiko Mendl use the Town Hall well: the wonderfully choreographed opening, in which the audience holding area slowly turns into a performance space, is notable for the way it layers its effects to ease you into the world of the play. As more and more of the cast barge past you to get where they need to be, you realise this isn't going to be one of those polite promenade shows where disguised ushers on below-minimum wage are constantly guiding you towards where the next scene will take place: you've got to keep on your toes and find it for yourself.

There are some intriguing themes running through the ninety minutes. What do we mean when we talk about home? The buildings and streets where we grew up, or the people we grew up with? Can we get by with one but not the other? It would be all too easy for these ideas to turn into a scripted debate with no real story attached (see Ken Loach's current film Jimmy's Hall for a prime example of that), but it's a trap that Tiang is careful to avoid, his characters being a lot more than mere mouthpieces. The small cast does his dialogue justice: Amanda Maud is particularly impressive given the way our sympathies for Eileen keep shifting, while Jonathan Chan gives terrific depth to the Wongs' enigmatic lodger Stanley Lim. The remaining parts are performed by a hard-working ensemble of summer school participants, plus a rotating schedule of interchangeable actors in the one Caucasian role, which strikes me as rather amusing satire if that's how it was intended.

If I had to pick one minor quibble with the play - and I feel I should, just for the sake of fairness - then it would be with the flashforward ending, which feels a bit jerky after the smooth narrative flow of what's come before. But I can see why it's there: it's a story about historical perspective, so at the end we need a historical perspective on the events of the play itself. And it also works as a springboard to inspire you to find out more about the history of the area. Yellow Earth have done all they can to help you with that, with displays in the town hall foyer, an interactive map comparing old and new Limehouse, and a downloadable audio walking tour narrated by Gabby Wong. The Chinatown in Limehouse may be long gone, but there are other areas of London going through the same trash-and-rebuild process today, with no regard for their previous history: The Last Days Of Limehouse shows us in an entertaining way what we could end up losing.