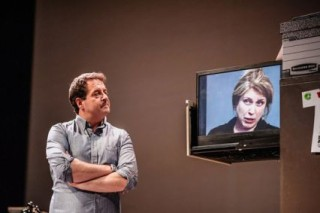 My previous record for the largest number of Edinburgh shows seen in a single day was eight, achieved in 1989 when I was too young to know any better. Nine in one day (see yesterday) has seriously wrecked me. At the very least, it left me with virtually no time to write up Wednesday’s events, and therefore is having a knock-on effect on all the Edinburgh Diaries for the rest of the week. I’m actually writing this one on Monday August 18th, and I’m not even in the same continent as Edinburgh any more. But I digress.

I spend most of the morning hunched over a hot keyboard attempting to make up for lost time, and then it’s off to the Traverse for Cuckooed, the new show by Mark Thomas. I can remember the days when Thomas was an old-fashioned stand-up comic, albeit one with more explicit lefty tendencies than most. In recent years, he’s moved away from that into the word of spoken word storytelling, usually with a very personal angle. This approach has given us shows like Extreme Rambling (the story of his walk along the wall between Israel and Palestine) and Bravo Figaro (recalling his father’s unexpected love of opera). Generally, they've involved Thomas talking about interesting people he’s met, rather than having an explicit political agenda. That agenda has come back for Cuckooed, and with a vengeance.

About twelve years ago, as Thomas was completing his transition from comedian to prankster/activist, he got involved in direct action with a pressure group called Campaign Against Arms Trade. We get to see recent video interviews with several of its members, with one notable exception: Martin, whose work for the group was suddenly curtailed when he was revealed to be a spy for BAE Systems, the UK’s leading arms manufacturer. Martin denies the accusation: Thomas vehemently rejects it, trusting his loyalty for a friend over the work of a Sunday Times investigation team. But gradually, the evidence starts mounting up.

This is a story that’s been public knowledge for quite some time – in fact, Thomas effectively wrote a draft version of this show as an article for The Guardian seven years ago. (Don’t read that if you’re planning to see Cuckooed at any point, it’s more or less the whole thing.) You could wonder, as The Belated Birthday Girl does, why he’s chosen to retell it on stage now. And I suspect the answer to that is in the furious final sequence, in which Thomas ties the story into similar recent acts of espionage by the authorities and asks, at what point do we draw the line? It’s an astonishing tale by any standards, but it’s the sense of personal betrayal that escalates it to the level of tragedy. Having said that, Thomas’ storytelling skills are getting stronger by the year, so this never becomes hectoring or worthy. He knows exactly when to throw in a gag for comic relief, including an exquisitely delayed punchline that’s set up in the opening seconds of the piece. The Traverse has always been the place to see the best theatre on the Fringe, and Cuckooed is easily up there with the best. 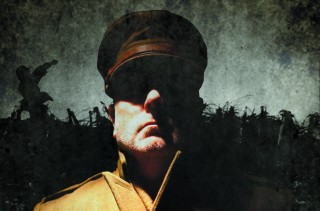 Another man, another one-man show. If anything, Guy Masterson is even better at doing them than Mark Thomas. Certainly in terms of sheer balls-out ambition, performing the likes of Under Milk Wood and Animal Farm as monologues gives him lifetime membership of the Gods Of The Fringe Club. By comparison, you’d imagine that Anthem For A Doomed Youth would be a more sedate proposition – a timely recital by Masterson of some classic First World War poetry and prose.

But ‘recital’ is too small a word to cover what he does with this material. He opens with an extract from Erich Maria Marquez’s All Quiet On The Western Front, describing a gas attack from the perspective of inside the trenches. Masterson hurls himself into the text from the word go, evoking a genuine sense of panic as the narrator struggles to stay alive. At the end of the piece he’s a gasping, shaking wreck, and it almost feels shameful that the audience isn’t applauding like crazy. But it isn’t that sort of performance – it’s not about Masterson showing off, it’s about presenting the writers in the best way possible, and that’s just as it should be.

As ever, Masterson achieves his effects with the minimum of theatrical trickery: a subtle change in lighting here, an audio backdrop of distant gunfire there. The rest is down to his voice, and the contrasts between one piece and the next. The viewpoint is always that of the soldiers at the sharp end of the conflict, from both sides of no man’s land. World War One was probably the last time that an anti-war opinion could be accepted as the status quo, and the words of poets of the calibre of Wilfred Owen and Siegfried Sassoon have shaped the way it’s been perceived ever since. But like Mark Thomas, Masterson knows when to lighten the mood: a delightful sequence of pieces on the unofficial ceasefire at the tail end of 1914 is perfectly timed. “A weird Christmas, n’est-ce pas?” as Frederick George Chandler says in his letter home. 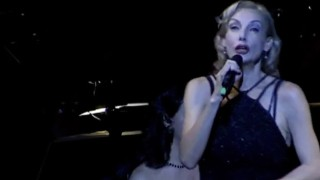 Is it too glib to say that our final event of the day – yes, just three, we’re tired, shut up – marks a smooth transition from World War One to World War Two? Possibly, but let’s go with it anyway. During her concert at the Usher Hall, Ute Lemper points out that her first appearance at the Edinburgh Festival was around twenty years ago. It appears that I was there for that one, watching her strugging to fill the vast stage of the new Festival Theatre with just herself and a pianist. This time, she’s got the Scottish Chamber Orchestra behind her, and it’s a great improvement.

It’s a show of two halves, like those feminist comedians they have nowadays used to do. The first half focuses on the Brecht/Weill songs that brought her to my attention – gulp – a quarter of a century ago. Lemper breaks the programme up with a few bits of biographical information, taking us chronologically to Kurt Weill’s move to America and his collaborations with the likes of Ira Gershwin, marked here by the gloriously dark Saga Of Jenny.

The second half, meanwhile, is more of a tribute to the likes of Piaf and Dietrich: the songs themselves aren’t perhaps as melodically interesting, but lordy does Lemper know how to put them across. The concert becomes a continuous sequence of Big Finishes, with the closing number Padam providing the biggest of the lot. After that, we need the relative restraint of the encore of La Vie En Rose to peel us all off the ceiling again.

As this is a much shorter piece than yesterday’s, I’ll pad it out with a quick recommendation for Siren Craft Brew’s Caribbean Chocolate Cake, which turns out to be a perfect nightcap beer. Thanks to the inevitable BrewDog Edinburgh for selling it to us. Also, thanks to the anonymous punter who stood next to us and said the most confusing thing possible to the bar staff: “pint, please.”