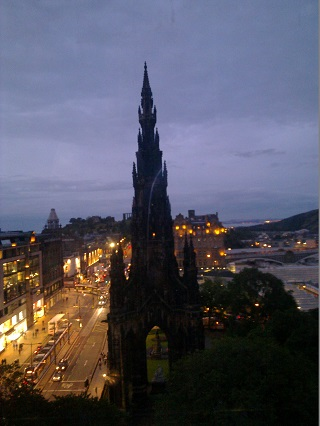 The Fringe and the Book Festival are all done and dusted for another year, while the International Festival still has a few more days to go (though that'll change in 2015). So while the topic still has some relevance to it, here are Spank's Pals with a couple of pages to themselves to talk about their highlights and lowlights of the 2014 Edinburgh Festival. This is the first one: the second one is over here. 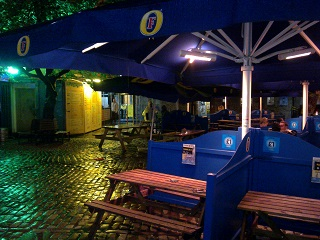 My 2014 visit will best be remembered for Hurricane Bertha (it was marginally more windy on Sunday than usual, with a little more rain), and for being the year the Muses and I finally saw a decent first night show (Danny Bhoy, Assembly Rooms). Not since Ross Noble did his last hour long show at the fest (Pleasance One), umpteen years ago, have we enjoyed a first night show as much.

This set the pattern for the week, as all the good shows I saw were comedy shows. Danny Bhoy: the sublime Tim Vine, who won gag of the fest for his “I decided to sell my Hoover… well, it was just collecting dust” effort: and the wonderful Bridget Christie, who delivered a master class in comedy writing to follow up her Non Perrier award winning show from last year. The show was so well constructed as to easily hide an obvious 10 minute filler, about her audition for a yogurt commercial: but such was the charm of her performance and the rest of her material so strong, she was able to tread the tightrope of campaigning on women's issues and keep everyone in the audience royally entertained.

I saw no standout theatre shows this year: some very good biographical shows, among them Janis Joplin (Full Tilt) and Rosalind Franklin (An Extraordinary Light), but nothing on the production scale of previous years, or garnering much impact or controversy, or using interesting spaces. It was another year when site specific theatre all but disappeared off the fringe.

Well as is traditional I would like to thank our fave monkey for all his efforts leading the troupe. It was generally considered to be one of the best Edinburghs in recent years, and I think our return to the Riego Street accommodation has been welcomed by all. My beer of the week goes to Fallen’s Platform C, which sold out hours after appearing on tap at the Cloisters pub beer festival: and Bar Italia gets restaurant of the week, for the outstanding Italian food.

Hollie McNish was one of four people reciting poetry at a show called Protest: The Rhetoric of Resistance at the book festival, and I nearly missed it thinking it might prove to be a bit too earnest for the last day in Edinburgh.

Other participants included Phill Jupitus reading some of his work from the 80's as Porky the Poet (amusing but a bit predictable, and I sort of felt his heart wasn't in it), Elvis McGonagall (energetic, witty, acerbic and often laugh-out-loud funny), and Hannah Silva – technically clever and atmospheric, using some sort of voice looping technical shenanigans.

But it was Hollie McNish (who looks about 15, but then so many people do these days) who really hit the spot with some warm, personal, funny and deeply moving observations of her family, particularly her feisty grandmother, sexuality and motherhood. Although it was a bit depressing to hear how little some things have changed (mothers breastfeeding in public – is that really still an issue?), just being in the company of a young woman with such gentle and shrewd insight and empathy felt, despite it all, really quite optimistic. 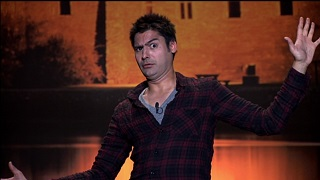 Back home again after my 17th (yes, really) consecutive visit to the Festival – I know I am a creature of habit but there is still something magical about the whole experience up there I never tire of. Although I wouldn’t say this was a vintage year for shows, it was still a hugely enjoyable week, and actually turkey-free. And the Saturday night jinx, which has been a regular feature of the week for so long, was well and truly broken - the credit for which goes to one Danny Bhoy (of which more below). And of course it was a welcome return to Riego Street once again.

Despite lack of stand-out shows, I would give the following particular mention:-

Danny Bhoy: 12 Nights, 12 Charities – Providing a great start to the week, this very personable Scottish comic had impeccable timing and use of the stage. His witty observations on a variety of subjects are spot on (including a fab BB King impersonation) and remain in the memory (which I have to admit not all comics do). A definite must-see whenever he next appears.

Janis Joplin: Full Tilt – I include this as a real tour de force of a performance. Angela Darcy’s portrayal of the tragic singer’s life was intense and powerful musically and theatrically, and the final sequence when the actress’s singing merged with the original version highlighted the skill of her performance.

John Muir, Rhapsody in Green - As an aficionado of Mike Maran’s shows, in one of my favourite venues (Valvona and Crolla), I always try and fit them in during the week, and this did not disappoint. Maran’s performance exploring the life of the Scottish naturalist in Sierra Nevada and Alaska really drew the audience in with his storytelling skills. I think he could read the telephone directory and really hold your attention!

One slight criticism I would make is that a lot of the theatrical productions were on at around lunchtime, so there were several things I might have been up for which I could not see due to clash of timing. This also happened a few years ago, and I hope this isn’t a sign of things to come. However, overall there was no shortage of choice.

The tried and tested eateries and pubs were up to their usual standard, and the Dragonfly cocktail bar was a pretty good substitute for the sadly missed Monboddo Bar (now improved worse by Hilton). However, it’s a sad goodbye to Barioja, whose Spanish tapas were second to none, and a perfect accompaniment to the rarely-found Cruzcampo beer.

Many thanks again to Spank for organising, and the Pals for their great company – it’s down to me and Nick to do the honours next year. In just over three weeks now, we will find out the future of this great country!