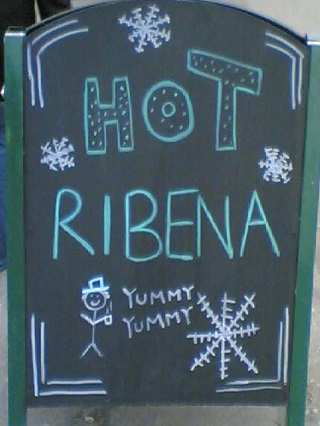 Moblog was a pretty radical idea to me back in 2004. There were plenty of free blogging platforms out there, and plenty of free photo hosting sites as well: but Moblog's combination of the two allowed me to bash out very short photo-driven posts, and do it on the move directly from my phone as well. Looking at it in the social media frenzy of 2014, it all seems rather quaint now. But at the time, my main blogging activity was built around the idea of pieces that were at least 1500 words long, and there's a lot to be said for brevity.

Having said all that, I don't seem to have ever really got a firm idea of what my moblog was for. Having started off with a whimsical blackboard photo that the Twitter kids of today would easily recognise, the next few dozen entries are a great big dump of photos from our 2004 Japan holiday, as discussed in full here. There are quite a few collections of holiday snaps in there - three separate Japan trips, Edinburgh, Hong Kong, and various locations in Europe - all tagged in a frustratingly poor fashion so that they barely work as albums, and all posted up from the safety of home a long time after the travel itself. Apart from that, there are lots of fuzzy photos taken from gigs, some even fuzzier videos, and frequent bits of random silliness.

Around 2011, my posting frequency on Moblog started slowing down dramatically, and halted completely in 2012. This was mainly because I'd found two other places to keep my photos online. The travel albums made more sense when I put them on Picasa, and so every bit of major foreign travel since our 2009 China trip is now documented on there. Meanwhile, the occasional bits of standalone whimsy were exactly the sort of thing that Twitter was made for. Thanks to its convenient integration with the Twitpic site, I could take a picture on my phone and have it shared with several hundred followers around the world within seconds. And I've been doing just that since - let's check, shall we? - January 5th, 2011.

For three and a half years now, I've been using Twitpic as a way of sharing little kneejerk moments with people. That will have to change next week, though, because Twitpic is shutting down on September 25th, and deleting all my photos with it. Serves me right for assuming they had a legal right to use a name with the word 'twit' in it, I guess.

At some point, I'll need to find another way to squirt photos out to Twitter: I'm experimenting with options right now. But in the meantime, I've retrieved my Twitpic photos from the site, and needed somewhere else to keep them online. So earlier this week, I made my first post on Moblog since 2012, just to say hello and to announce that I'd be transferring my Twitpic archives over to there for the next few weeks. As you can see from the comments, people have been really nice. It's possible they're just grateful for the company - looking at the latest images feed, there aren't anything like as many daily posts as there were in Moblog's heyday - but there's something rather sweet in seeing an internet community that's still hanging on in there after a decade.

So: over the next few weeks, keep an eye on The Unpleasant Moblog and relive a whole series of topical events from the period 2011-2014. And after that... well, we'll see.