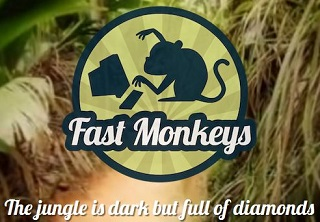 In the meantime, your Simian Substitute Site for September 2014 is Fast Monkeys. As you're probably aware, work has had me running around like a blue-arsed fly this year, with the increasing size of the Hotel Rooms 2014 Pretentious Art Project a testament to this. There are a couple of locations I've visited multiple times as a result: Helsinki is one of them, and I'm back over there again this month. So I decided it might be an idea to find a Simian Site that originates from there.

The one I found ties in nicely with one of the other items discussed above. Fast Monkeys is a tech development company based in Espoo, a city just down the road from Helsinki which is also the location of several other similar enterprises. I'm sure they do terrific work in their field, but seeing all those buzzphrases come up on their website after watching season one of Silicon Valley gives me a funny feeling in my head. Anyway, tervetuloa to them.

Coming up this month: well, quite a few things, actually. September normally exists as the downtime between Edinburgh and the London Film Festival, but I think I may have a couple of things to entertain you in between the two. Now, how about you entertain me? The comments box is below, go for it.