Reviewed today: The Colour Of Pomegranates, The Cut, Listen Up Philip. 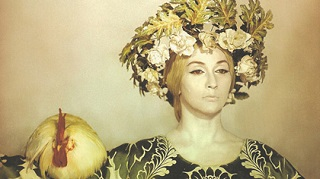 Sergei Parajanov's 1969 film The Colour Of Pomegranates is one of the established classics of world cinema. Martin Scorsese said so only last month, so it must be true. Mind you, he was introducing a restoration of the film that his Film Foundation was responsible for, so maybe he's biased. It's worth noting that even fans of the film admit that it's hard work. In his introduction today, Daniel Bird says that he's seen it a dozen times but still barely understands it - "a film for groovin', not understandin'" as William Kloman once said about 2001, the big hippy.

Still, this is why we have an archive programme in the LFF - to introduce films like this to people who haven't had the chance to see them before in ideal conditions. Obligingly, Parajanov sets up everything clearly in his opening captions: the film is inspired by Armenian poet Sayat Nova, but tries to represent his inner life rather than tell a straight biography. Quotations from his work are presented in intertitles, interwoven with increasingly surreal images inspired by the words. In the early stages, the imagery is easy to get a handle on, with liquids establishing themselves as a common theme - juice oozing out of pomegranates, rain flooding down a library wall, the water being squeezed out of the pages of sodden books. But as the film goes on, rather than the images coalescing into a series of obvious themes, they become becomes even more diverse, although towards the end the subject of death becomes a little more prevalent.

Bird's introduction sets up the tormented history of the film's release: its non-linear structure was quickly re-edited by outside hands into something more chronological, and it's this re-edit which audiences have come to know over the last few decades (see the archive.org link above). Parajanov's original edit (which we get in this new restoration) was more of a stream-of-consciousness affair, though it's difficult to see how it would make much more difference in terms of comprehension: particularly as he uses several different actors (and an actress) to portray Sayat Nova at each stage of his life, which makes it easy to see where we are in his personal narrative.

Still, if we're groovin' rather than understandin', it has to be said that these images - whatever order you put them in - probably haven't looked this good since the day they were filmed. A loving 4K digital restoration makes each individual shot a masterpiece in its own right, whether it's designed to be beautiful, disturbing or just plain funny. (The sight of a flock of sheep perfectly arranged on the steps of a bell tower is a great example of the latter, and gets the biggest laugh of the day.) You suspect that Western audiences, unfamiliar with the historical background and cultural references, have simply treated Pomegranates as eye candy: and if you're happy to go along with that, it's some of the finest eye candy you'll see anywhere. I just wish Bird hadn't pointed Parajanov's subsequent influence on music video directors, because I spent most of this screening seeing images stolen by Tarsem Singh all over the place. 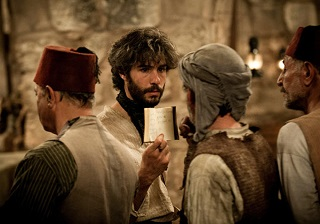 A dialogue from around 5.20pm this afternoon.

SPANK: I've only just realised - what with Pomegranates earlier, and The Cut coming up next, we're doing an Armenian double bill today.

THE BBG: Yes! And we're having dinner in a Turkish restaurant in between the two.

Fatih Akin's The Edge Of Heaven was my favourite film of LFF 2007. A complex three-part story that criss-crosses back and forth between Germany (where Akin lives) and Turkey (where his parents came from), it's a wildly ambitious piece of work. When he introduces at the start of The Cut that this is an even more ambitious film, I initially assume it's just hype on his part - but he's right, this is a gigantic movie, of huge geographic and historical scope. It's probably a spoiler to say just how huge that scope is, so apologies if things get a bit vague from here on in.

The Cut starts off from a grim and little-talked-about period in Turkish history, the Armenian genocide of 1915.  The blacksmith Nazaret (Tahar Rahim) is one of many Armenian men taken away in the middle of the night and forced into hard labour. A stroke of (comparative) good fortune means that he isn't actually killed, but he permanently loses his voice in the process. Having escaped from the Turks, he sets out to find his wife and daughters, who he's heard were taken away to a camp shortly after his own capture. But that turns out to just be the start of his search.

The massacre of the Armenians was covered tangentially in Atom Egoyan's 2002 film Ararat, and Egoyan's wife Arsinee Khanjian turns up in a small cameo here, as if to suggest that there's only a limited pool of Armenian actors to draw on. But Akin's approach is very different to Egoyan's, in that he's chosen to depict what happened in a much more direct fashion. Having said that, in the post-screening Q&A he says he would rather audiences approached this as a human drama rather than a genocide film, and I can understand totally why he says that. If you go in as I did, expecting this to be a story largely set during the 1914-18 war, then you'll be surprised that it doesn't wrap up neatly once the Turks have been routed: you may even end up slightly exasperated by the narrative twists that extend Nazaret's search every time he looks like he's getting closer to his family.

Looking back at The Edge Of Heaven now, I think that the complex structure of its story was the hook that impressed me most about it: the emotional and political material added even more layers of pleasure on top of that. By comparison, The Cut's quest narrative is a lot more straightforward and linear, and sometimes feels like it's being over-extended just for the sake of it. But it's still a story told on an epic scale, by a wildly confident filmmaker who's got the skill to pull it off: and the emotional and political angles have just as much impact as they did in his earlier film. The presentation of a piece of history that some of Akin's ancestors would rather forget about is just the starting point. 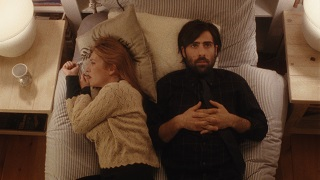 Celebrity spotting is always a part of the LFF, and the Curzon Mayfair's bar is where we hit solid gold: in the short wait between The Cut and Listen Up Philip, we catch Jonathan Pryce, Terry Gilliam and Bill Paterson in rapid succession. Pryce is actually a star in the latter film, and gives us a riotous onstage introduction: "my good friend Terry Gilliam is in the audience, so he can learn how to make a movie for under five million." It's a magnificent gag, but unfortunately it's the best one we're going to hear for the next two hours.

Philip Lewis Friedman is a writer - he's got one novel out in the shops, and a second on the way. The problem here is that he's played by Jason Schwartzman, who was in an HBO show a few years ago called Bored To Death. In that show, he played a fictionalised version of another writer, the show's creator Jonathan Ames. And as this film progresses, the parallels between Friedman and fictional-Ames just keep racking up. They both live in Brooklyn. They both teach writing in their spare time. They both look up to an older mentor figure (in this film it's Pryce, playing the veteran novelist Ike Zimmerman). They both have relationship difficulties with multiple women: Friedman spends much of his time wobbling between steady girlfriend Ashley (Elisabeth Moss), fellow teacher Yvette (Joséphine de La Baume) and Ike's daughter Melanie (Krysten Ritter).

Luckily for his lawyers, writer/director Alex Ross Perry hasn't just ripped off Jonathan Ames completely. Because Schwartzman's character in Bored To Death is a socially inept but lovable goof, while his character in Listen Up Philip is just a self-obsessed dick.  Having said that, you could say the same about most of the other characters here as well. If their dickery was presented in a way that allowed us to find them funny, Perry might have had something here. But the occasional funny line - and there are a few - is almost always swamped under the sheer weight of unpleasantness of all the characters, with Philip just being the worst offender because he gets the most screentime.

The film's as wearing visually as it is verbally, thanks to the decision to shoot it largely in closeups. Some of the cast make the most of this: Elisabeth Moss, in particular, gets a few extraordinary wordless scenes where she gets to show off her skills in a level of detail she rarely gets to achieve on Mad Men. But most of the time, you just end up tired of having everybody's face constantly in your face.

It may be partly down to me bringing too much Bored To Death baggage along, but Listen Up Philip was a disappointment for me - it's a film you want to like more, but it seems to be doing everything it can to stop you liking it. This makes the relationship between the film and its potential audience a perfect analogue of the relationship between the character of Philip and the rest of the world. Which is meta, I'll give you that, but unsatisfying as hell.