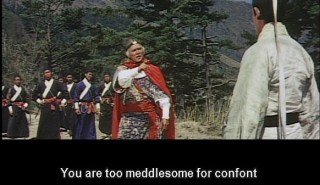 I'm sure that some people treat the Treasures archive section of the LFF programme as a way to indulge themselves in comfort cinema: and that's precisely what I'm doing today. I've not only seen this film before, I've seen it in this very cinema, as part of the BFI's Heroic Grace season of kung fu flicks back in 2004. I loved Dragon Inn so much that I tried to buy it, only to discover that it's a film that's been poorly served by home video (see illustration): my own current copy is a fuzzy, cropped Chinese VCD, with two layers of burned-in subtitles occupying a third of the screen space. But now we have this ravishing 4K digital restoration, and the involvement of Eureka as distributors would suggest that there's a lovingly-produced blu-ray on the way.

Which is as it should be, because King Hu's 1967 martial arts classic set the template for others to follow for decades afterwards. Its plot is relatively simple: it's the ridiculous number of characters that makes it complicated. The Emperor's evil eunuch Cao Shaoqin (Bai Ying) rules the land with his armies of soldiers and spies. He's just executed one of his rival ministers, and sent his family into exile. The family escapes in the direction of the eponymous inn, and Cao sends his troops there to head them off. But a team of the usual martial heroes - master swordsmen, sarcastic adventurers, women dressed up as men - is assembling there to stop that from happening, and to laugh at Cao for not having any balls.

Since I last saw Dragon Inn, the story's been clouded in my mind by a couple of newer versions - Tsui Hark's sort-of-remake Flying Swords Of Dragon Gate, and Wong Jing's pisstake Treasure Inn. But the original is still the best. The fights in Dragon Inn have the stylised quality of Peking Opera, but are still thrilling because of the role they play in the story. The magnificent restoration finally does justice to King Hu's visual strengths - his precise widescreen compositions, and his sure sense of when to move the camera and when to keep it still. This time I paid more attention to Lan-Ping Chow's unusual score: again, the main influence is Peking Opera, but there are avant-garde touches like sampled orchestral stabs to accompany the most dramatic shots, and the electronic freakout used to represent Cao's asthma attacks. And if the last bit of that sentence confused you, maybe it's time you saw this film for yourself. 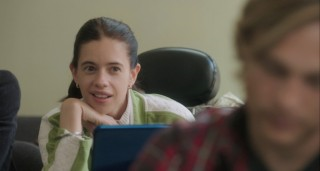 I get regular emails from the BFI in the runup to the festival: the usual stuff about programme changes and new batches of tickets being released. But the mail I received a couple of weeks ago relating to this screening of Margarita, With A Straw was some sort of first, as I was warned that wheelchair places at the Vue West End were selling out fast and I'd need to hurry if I wanted one. Still, once you know the details behind the film it's easy to understand the demand.

Laila (Kalki Koechlin) is a Delhi teenager with cerebral palsy. She's at an awkward transitional stage in her life, uncertain whether she wants to hang out with other kids with disabilities, or try to make friends outside of that circle. Sadly, she ends up making a little bit of a mess of both. At her lowest point, she gets a scholarship to study writing in New York. She takes the opportunity to make a new start, and pretty soon she's made friends with a blind Pakistani girl called Khanum (Sayani Gupta). But even Laila is unprepared for how much her life will change as a result of that.

It almost seems too much to have a blind character and another with CP in the same film, particularly when we also find out early on that Laila's mum isn't in the best of health herself. But writer/director Shonali Bose (co-credited with her partner Nilesh Maniyar) has a specific agenda relating to dealing with personal tragedy, something she had to do herself during the development of the film. I'm always wary of disease movies, but even though there are three battling for screentime here, they don't get in the way of the main thrust of the story.

At the film's heart is a devastating performance by Kalki Koechlin, who surprised the hell out of many people in the audience by running onto the stage for the Q&A after the screening. Bose admits that she thought long and hard about the pros and cons of using an actor with CP, before deciding to go with an able-bodied performer ("I'm not making a documentary"). But Koechlin totally justifies that decision with her work on screen: it's a brilliantly observed and utterly convincing portrayal of cerebral palsy. Bose's script is equally brilliant, and I think revolutionary, in that it goes into areas that are rarely explored by cinema - not only is Laila a disabled character with control over her own life, she's also a disabled character with sexuality, and that becomes a major driver of the plot.

This could easily have turned out to be very worthy or very mawkish stuff, but Margarita, With A Straw avoids both of those pitfalls to become something wholly unique and delightful, thanks to the charm of its characters and the emotional intelligence of its script. It's interesting to learn that Indian distributors have been happy to work towards getting the film out to a domestic audience, despite its subject matter: Western distributors, on the other hand, are a little more worried about its content. Someone should do something about that. 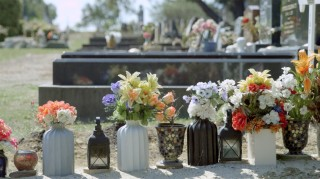 Lynette Wallworth's documentary reminds me primarily of a friend who died a few years ago without leaving a will, and the ensuing battle between their partner and their relatives over who got to inherit their possessions. A few people I know got their own wills sorted out very soon after that incident. But even then, our wills are normally concerned with the reallocation of our stuff, and rarely cover how we want to be treated when we die - what we want done with our remains, and where we want them to go. It's a tricky question, and it's one that nobody wants to talk about until it's too late.

The Port Kempla Community Centre in Australia has decided to do something about that. They've set up their own not-for-profit company, Tender Funerals, allowing their neighbours to bypass the corporations who sell funeral services as a commodity, helping them to become more personally involved with the process, and - as a happy bonus - saving them a few thousand dollars. The film follows the Community Centre's women (the men have a separate support group of their own) as they start setting up the business - finding a burial plot, buying equipment, letting people design their own coffins. But alongside their work we also get the story of the Centre's caretaker Nigel, and begin to realise that we may be looking at Tender's first client.

The best documentaries present the world in such a way that you look at it differently afterwards, and in a mere 73 minutes Tender does precisely that. It presents a community working together in a way that seems totally alien to us Londoners. It unsentimentally works through a series of ideas of how to deal with death: in its extraordinary climactic scene, it shows us images of how to deal with it as well. And it does all of this with typical Australian good humour - not just the dark wit that comes when you're openly discussing things that nobody wants to talk about, but the warmth of a group of people who've found themselves living together and decided to make the best of it.

Wallworth is primarily known as an installation artist, but Tender is a hell of an achievement as a first film. Aside from its characters and story, it's a beautiful looking piece, enhanced by another fine score from Nick Cave and Warren Ellis. (The latter turns up alongside Wallworth for the Q&A, and confirms the image of him presented in the recent 20,000 Days On Earth as a wonderfully nice bloke, despite looking like an Australian Yeti.) The film was originally made for Australian TV, but hopefully it'll prove to be an inspiration to people outside the continent as well. Now if you'll excuse me, I think I've got some planning to do.