Reviewed today: The Creator Of The Jungle, War Book, X+Y. 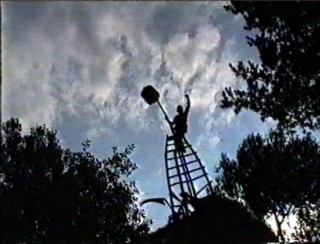 1.00pm: The Creator Of The Jungle [official site]

Some movie titles just get into your head the wrong way, and as a result I've had this song as an earworm for the whole morning now. I wouldn't mind, but this never happened with Kung Fu Jungle yesterday.

Anyway, after a one-day break we're back on the documentaries. The subject of this one is Josep 'Garrell' Pijiula, who grew up in a Catalan village and spent his childhood playing in the nearby forest. What makes him unusual is that he's now 76 years old, and he's still playing there. For the last few decades he's been making regular trips out to the forest, building an elaborate complex of towers and tunnels out of found materials.

We watch Garrell constructing his jungle on fuzzy VHS video, and it takes a while for us to discover who's holding the camera - it turns out that he's persuaded a teenage boy to follow him around and film him. It's good for the purposes of this documentary, but you find yourself wondering if there's a hidden agenda we're not seeing yet. And when Garrell proudly proclaims to camera "now it's time to make our Tarzan movie" while taking his trousers off, it feels like the whole thing's going to go a bit Yewtree. In fact, it's going to be even stranger than that.

Jordi Morató's documentary, assembled largely from footage shot at the time with some new material towards the end, carefully skews the material to emphasise Garrell's long-term obsession. We see in an early scene that Garrell isn't living in his jungle, but regularly drives there from somewhere else. We also know he has some immediate family, because a young nephew plays the son of Tarzan in his second movie (yes, it gradually turns into a franchise). But those are the only clues that Morató gives us regarding Garrell's life outside the jungle.

There's a risk that Garrell is being presented as some sort of freak, but Morató's careful never to do that - the closest we come is a middle section shot by an academic who treats Garrell's construction as 'outsider art', which I've always considered to be a polite way of labelling someone as a nutter. He's obsessed, sure, but it's a very balanced kind of obsession: his efforts in constructing the jungle are celebrated here, and his resilience when things go wrong is celebrated even more.

It's only a short film (77 minutes), but Morató isn't afraid to let it ramble a little, with an extended clip from Garrell's last Tarzan movie in the centre and an extended single-take image of destruction at the climax. The deliberate pacing, if anything, stops it from turning into a freakshow, and makes it more of a humane study of an unusual character. But as spectacular as the images of Garrell's jungle look (even through VHS fuzz), one awkward thought kept nagging at me - what if it's all faked with model work? Wouldn't it be magnificent if this whole film turned out to be a fictional found footage drama? Or is that just me? 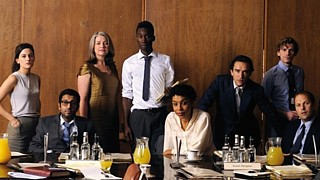 It's another world premiere screening, but a much lower key one than Kung Fu Jungle last night. Nobody's out on the streets waiting for Tom Harper and Jack Thorne, the director/writer team responsible for previous LFF hit The Scouting Book For Boys. Mind you, the weather is disgusting, so you can't blame them. But there's one useful thing we discovered while spending a wet Monday afternoon wandering around Soho: it's the one time of day when Burger And Lobster doesn't have a queue to get in.

War Book is set in the present day, but was inspired by Jack Thorne's discovery of the long-running civil service tradition of the same name. Eight civil servants (plus a minister) gather round a table once a year to plan the end of the world. More accurately, they're going through a simulation exercise where they're presented with a scenario involving a rapidly escalating war between India and Pakistan, and have to describe how how their various departments would respond to the crisis. At the same time, however, they've each got their own political and personal problems to deal with.

It's a bit like Twelve Angry Men with nukes, and I'm pretty sure I'm not the first person to have said that. At the beginning, as it gradually became apparent that we'd be locked inside a single room for the duration of the film, I did wonder if there was any real reason for this to be a movie. But as it progresses, the story becomes utterly gripping. Crucially, you don't just forget you're watching actors pretending to react to a global crisis, you forget that they're pretending to pretend to react - it's very easy to lose all sense of the characters being involved in a simulation, the stakes feel as high as the real thing.

Thorne's script, Harper's subtle direction, and a cast full of surprisingly familiar TV faces - Nathan Barley himself, Matthew from Game On, and two of the guys from Utopia - all collaborate brilliantly to bring new life to a paranoid genre that you may have thought died out completely with the end of the Cold War. As Harper said in his Q&A afterwards, the fear of nuclear armageddon that we used to have back in the 1980s has all but vanished now, and maybe it's time that it came back. 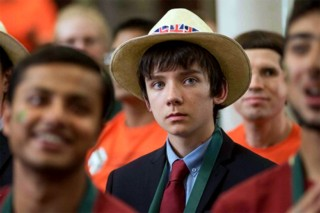 From there it's over the road to another premiere, but only a European one this time. Still, we get a few of the film's stars along, as well as at least one close relative - Timothy Spall turns up to cheer on his son Rafe, still sporting the whiskers he grew for Mr Turner. Did I ever tell you that I once saw Timothy Spall arrive at an LFF black tie gala in a minicab? Well, I did.

X+Y is the first fictional feature by documentary director Morgan Matthews, and it draws inspiration from one of his earlier factual films: Beautiful Young Minds, which looked at a group of young contestants preparing for the International Mathematical Olympiad. Our hero Nathan (Asa Butterfield) was diagnosed on the autistic spectrum at an early age, and has shown a huge aptitude for maths throughout his childhood. His widowed mum Julie (Sally Hawkins) doesn't really know what to do with him, and passes him on to Humphreys (Rafe Spall), a teacher who can help stoke Nathan's enthusiasm for the subject. In his own childhood, Humphreys entered the Maths Olympiad but didn't do very well: could Nathan give him the redemption he desperately needs?

Nathan is entered on the UK team for the IMO, and is shipped off with them to Taiwan for intensive training. And as soon as Eddie Marsan appeared on screen as the team coach (he wasn't mentioned in the LFF programme), I thought "oh, this is all going to be just fine." And so it was. Initially, I wasn't so sure. X+Y could so easily have been a double whammy of a disease-of-the-week TV movie, because we don't just have Nathan battling with autism, we also have Humphreys coming to terms with his own MS. But both ailments are depicted with dark wit and very little sentimentality (apart from the very end, when you can just about let them off).

In fact, although James Graham's script initially appears to be foregrounding Nathan's autism (the obvious hook for a maths-based story, and the inevitable motor for several of its best jokes), it turns out to be about so much more than that. It's really the story of Nathan's education into the adult world, as he's forced to cope with suddenly being transported to a totally alien country on the other side of the planet. Danny Cohen's photography is a huge factor in emphasising the impact this has on the boy, as he shoots Taipei as a psychedelic riot of vibrant colour. Asa Butterfield appears to be maturing into a proper star, the other kids are nearly as impressive, and the adult leads bring along all their expected characteristics - Hawkins' sense of wonder, Spall's laidback slobbiness, Marsan's terrifying enthusiasm - to pull it all together. X+Y may have been made for the BBC, but it's got enough going on on the visual side to make it worth catching on a cinema release if it gets one.