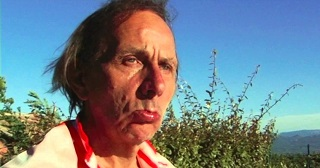 Another one of those 'time flies' moments occurs this morning, as I realise that I've been giving Benoît Délepine and Gustave Kervern the benefit of the doubt for a whole decade now, all on the basis of their first film. Aaltra was a terrific debut, building a whole distinct world out of a single surreal premise (two men who lost the use of their legs in the same tractor accident cross Belgium in wheelchairs). Their subsequent movies - Louise-Michel, Mammuth, Le Grand Soir - haven't been as inventive or as funny, but they've established Delépine and Kervern as poets of the financial crisis, as they keep returning to the theme of people struggling to keep their heads above water in the wake of the crash.

Near Death Experience takes this theme one stage further, and (to my mind, anyway) dials down the comedy even further as it does so. In the early stages of the film, we're introduced to Paul (Michel Houellebecq) in a series of long take single scenes, where we never get to see the faces of anyone he's with, whether it's his family or his work colleagues. He's obviously depressed and isolated, but nobody around him seems to have spotted that. One day, he walks out of the family home promising he'll be back in an hour or so. Instead, he gets on his bike, travels out to the mountains, and prepares to kill himself. It turns out to be less easy than he thinks: as he says to himself at one point, "you talk too much and don’t commit suicide enough."

He's got a fair point, although you could replace 'talk' with 'wander around in front of photogenic scenery shot on low quality video' and you'd be closer to the mark. There are too many sequences in NDE that feel like a parody of a bad art movie, or worse, an actual bad art movie. The well-worn trope of having your protagonist slowly walk from one side of a long shot to the other side - let's call it That Bruno Dumont Bollocks for short - is the worst offender here.

It's a pity, because in between those sequences there are some lovely moments. Michel Houellebecq (in his second movie appearance of the year) has to carry this film almost single-handedly, and for an author dabbling in acting he does an astonishingly good job. He's got the perfect face for a suicidal Frenchman, and delivers some wonderful soliloquies which almost persuade the audience that he's right to want to end it all. (In the best of these, he complains that his grandfather was allowed to become an old man at Paul's age, an option that society doesn't allow any more.) And at the end, Delépine and Kervern finally unveil some of that dark humour that's enlivened their best work, with a closing flourish that's breathtaking in its simplicity. But by then, it's a little too late to redeem the film. 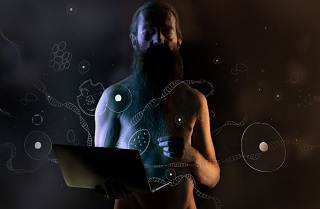 This is all getting a bit morbid at the moment, isn't it? Yesterday, we had a documentary about funerals: today, we've had a comedy of sorts about suicide, and now we're following it with a study of two men trying to find a cure for death. Or, at least, to halt the ageing process so we can live much longer.

The two scientists in Jason Sussberg and David Alvarado's documentary are very different, and the contrast between the two is what makes The Immortalists fascinating. Bill Andrews is an upbeat American, who spends his time either slaving over a hot microscope or taking part in extended marathon runs that he insists are prolonging his own life, even though one of them in the past nearly killed him. His British counterpart is Aubrey de Grey, a biologist with a beard like a craft brewer and a thirst for knowledge that's mirrored by his thirst for beer. The two have very different ideas on how to extend the human lifespan - Andrews is working on a technique to make cells immortal, which de Grey insists would make cancer unstoppable - but they both believe that ageing can be halted in their lifetime.

de Grey admits early on that throughout history, so much snake oil has been peddled in the cause of eternal life that it's easy to see why people remain sceptical. And to be fair, if you watch this film you may well end up sceptical too. The lion's share of screentime goes to de Grey, mainly because he's such a compelling character - Andrews has a nice advertising tagline ("cure ageing or die trying"), but it comes as no surprise to learn that he was a late addition to the film's structure. But de Grey's credibility never quite survives the Oxford University debate he attends on the subject, where it becomes apparent that he knows about all the potential damage to society that could occur when you stop people dying, but has chosen to ignore it. And then when a small detail about de Grey's domestic arrangements is blurted out by his wife, you end up calling his motives into question as well.

All of this conflict makes for a great documentary, without ever feeling like the conflict has been deliberately stirred up for narrative purposes. Sussberg and Alvarado have done an excellent job in presenting the science in layman's terms, using narration by the scientists together with stylised animation to give you a crash course in genetic science. Similarly, we're given just enough background detail on the scientists to understand what drives them - for example, both of them have parents who display awkward lapses in memory while being interviewed. There's plenty to think about afterwards, although it's interesting to note that a snap poll of the audience in the Q&A reveals a 50/50 split between people who think curing ageing is a Good Thing or a Bad Thing. Apparently, this figure varies from country to country: "Canadians really love the idea of eternal life." 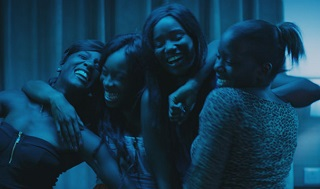 What's the most badly scheduled day I've ever had at the London Film Festival? I suspect it would be Sunday November 15th, 1998, in which I saw films back-to-back in Kilburn, Brixton and the West End. Today probably counts as the second worst, in that it once again requires travel between the West End and the Brixton Ritzy, but wraps up with a sideways move to the Cine Lumiere in South Kensington. The cinema inside the Institut Francais is, inevitably, presenting our second French film of the day. (Second French film of the entire festival, in fact - I think it's just a coincidence that we've been avoiding them for so long.)

Girlhood tells the story of the young black teenager Marieme (Karidja Touré), who's struggling at school and has failed her class two years in a row. Her domestic situation is just as bad, having to look after her younger sisters while avoiding being beaten by her brother. In frustration, she hooks up with a stereotypical group of leather-jacketed Bad Girls that hang around outside her school. Pretty soon she's given herself a new name (Vic - "short for victory"), completely reinvented herself and created a new life. But is it the right one for her?

Céline Sciamma's film has been picking up a lot of acclaim - it's the only one I'm seeing this year that's eligible for the LFF's Official Competition award. (It was a contender at the time we went into the screening, but by the time we came out Leviathan had won the prize.) But in terms of presenting the problems of French urban youth, it's not doing anything that La Haine hadn't already done twenty years ago, apart from its protagonists being female rather than male. You could argue that the main thrust of Girlhood is the sheer sense of entitlement displayed by all the characters Marieme encounters, especially the men: they bulldoze their way through society insisting that everything they want should be theirs by right. But Marieme is equally bad on that score - the film is structured so that everything that happens is seen as a direct consequence of her being offered a place at a different school from the one she wanted. Within a few weeks of that, she's escalated to hassling smaller kids for their lunch money, and yet we're supposed to feel sorry for her.

Girlhood only works if you have some sort of sympathy for Marieme's plight, and I never really had that. There's never any sense that the situation is completely out of her control, and especially not in the early stages of the film. It could be a lot worse: when we see her taking a knife out of the kitchen drawer and putting it in her pocket, it feels like the worst kind of foreshadowing, but turns out to be not quite as bad as you'd imagine. Still, when that's the closest thing that Girlhood gets to subtlety, it shows you that it isn't quite working.