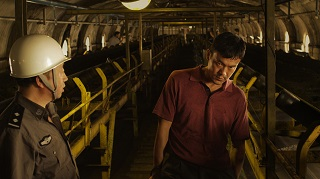 I've done well to get as far as five days into this festival before being able to say it, but let's note it anyway - Black Coal, Thin Ice is the first film I've seen at this year's LFF that hasn't had anyone around to introduce it. (The Belated Birthday Girl only managed four days, thanks to the lack of accompaniment to The Great Invisible yesterday.) So let's say something about what we did get prior to the film: the trailer for the BFI's Days Of Fear And Wonder sci-fi season, which is playing before every movie here. It's a cut-down version of this trailer: the one playing at each LFF screening doesn't appear to be available online. So you'll have to take my word for it that around three times every day, I have to watch the bone-to-spaceship bit from 2001 - the single most famous jumpcut in cinema history - re-edited into a crossfade. That can eff right off, seriously.

Anyway, back to the film. I'm always fascinated by Chinese films with contemporary stories, as all too often UK distributors ignore them in favour of pretty period dramas with nice costumes. You could argue that Black Coal, Thin Ice is a period drama itself, as its story starts in 1999 - although the dialogue brazenly suggests that writer/director Diao Yinan has only done this because the Chinese police didn't have DNA testing back then, and a tiny bit of forensic analysis would cause the whole plot to fall apart.

It's a so-so cop drama with a terrific opening: the camera follows a shipment of coal travelling in a lorry all the way to a processing plant, where the workers discover what we've seen all along - there's a severed human hand sticking out of it. Detective Zhang (Liao Fan) does his job, identifies the victim (bits of whom are turning up in coal yards all over the place) and locates a suspect. He's badly wounded in the ensuing shootout, whereupon we jump forward five years to find him a drunken wreck, working as a security guard. But a chance meeting with his former colleagues reveals that recently, more body parts have been found in coal shipments. Zhang shouldn't really be back on the case, but he is anyway.

Apart from that opening, there are a few other scenes that set Black Coal apart from a run-of-the-mill police story. The pivotal shootout is brilliantly presented in a single static take and shot from a distance, as if to emphasise its faintly ridiculous nature without detracting from its huge impact on the story. And there are some unusual visual motifs that tie the piece together, like the daytime fireworks that give the film its Chinese title.

But the story is structured in a very peculiar way: it's a police procedural that goes into such intense detail about many aspects of the procedure, you feel it's building up to some major revelation that never happens. Towards the end, it stops feeling like realistic detail and more like padding, particularly once the villain of the piece has been identified and there's no real need to go much further. And the character of Zhang is problematic too: there are many ways you can show he's a flawed hero, but having him repeatedly sexually assault women shouldn't be one of them. In the end, the flaws in the film largely outweigh the good points. 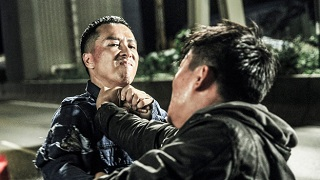 Moving over from Mainland China to Hong Kong, and things are looking a lot less grim: the Empire Leicester Square is buzzing with a big red carpet celebration to welcome the star of Kung Fu Jungle, the legendary Donnie Yen. As with So Young last year, it's fun to see the residents of London's Chinatown making so much fuss over a movie star that most of the other people in the Square won't even have heard of. And it strikes me that what with this last-minute addition to the programme, and The Grandmaster being last year's Surprise Film, there appears to be strong evidence that LFF boss Clare Stewart is a big fan of kung fu films. Crouching Tiger 2 for LFF 2015, then?

It's the world premiere of the film (it doesn't open in Hong Kong for another fortnight), and excitement is running high at the screening. It's showing in the Empire's newly constructed IMAX screen, which is great in terms of visuals but still seems to have the sound problems that the old Empire used to be notorious for, particularly when it comes to the post-screening Q&A. Still, Yen is in fine form here, dealing with the barely audible questions with delightful charm, rather than leaping twenty feet into the air and kicking the shit out of the speaker system.

The film itself is a bit of a genre mash-up, combining a modern serial killer story with a more traditional tale of warring martial artists. Donnie Yen plays Hahou, a kung fu instructor for the police, who turns himself in when he accidentally kills a rival in a fight. He freely admits his guilt, wants to do his time, and is a model prisoner. But when reports emerge of a series of murders, each one perpetrated using a different kung fu technique, Hahou demands that investigating officer Charlie Yeung lets him out to help. He knows who else is on the killer's list, and he suspects he knows why it's happening.

Hong Kong action cinema's going through a bit of a nostalgic phase at the moment: lots of their films are largely about harking back to their glorious past, reviving old stars or rehashing old stories. Director Teddy Chan could be accused of this as much as anyone else - Kung Fu Jungle's end credits reveal that an extraordinary number of familiar faces from the past have been making tiny cameo appearances throughout. But I think this film balances the old and the new in a way that's never been tried before. At its core is a plot framework familiar from countless Shaw Brothers movies: the martial artist trying to atone for a mistake by living a life of peace, the temptation by external forces for him to reject that life of peace, and the explicit showcasing of multiple fighting styles in the same film (partly for educational purposes, partly for showing off). Chan's taken all of these familiar elements, but put them into a contemporary police actioner, and somehow the two of them blend perfectly rather than flip-flopping between genres.

The performances by all concerned are fine, but as is usually the case in a Donnie Yen film, it's all about the guy at the centre of it all. Yen's fight choreography is sometimes obscured a little by modern-style camerawork and editing, but the structure of the film basically promises us a scrap every reel or so, and every one of those scenes delivers. You get a little nervous when you realise that the climactic fight is going to take place on a six-lane highway: but thankfully, Chan resists the temptation to have CGI cars missing the fighters by millimetres every few seconds, and just uses the traffic as a backdrop to highlight the stuff we've all come to see.

For a film that's almost inevitably going to quietly slip out straight to video in this country (though I would love to be proved wrong on that), the opportunity to see it on an IMAX screen is an enormously welcome one. And kudos to Donnie Yen for being one of the few stars who's introduced an LFF screening and then sat with the rest of the audience to watch the film. Still, it's not like anyone else in the audience was likely to mess with him. 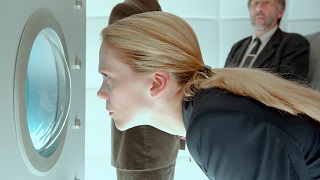 There are a number of directors that I suspect I wouldn't be familiar with if it wasn't for the LFF: and the Norwegian comedy director Bent Hamer is definitely one of those. It turns out that the first time I saw one of his movies was as far back as 2003, which surprises me as it doesn't seem anything like as long ago as that. Kitchen Stories was a strange little tale based on fact, showing the growing relationship between two people involved in a scientific study of kitchen habits - a Norwegian lab specimen and a Swedish observer. The comedy came out of the contrast between the cold science and the warmth of their friendship.

Hamer's made several very different films since, but 1001 Grams feels like a throwback to that first international hit. The science this time comes from the study of weights and measures, focussing on the father and daughter team of Ernst (Stein Winge) and Marie (Ane Dahl Torp), who both work for Justervesenet, the Norwegian body that standardises the weight of the kilo and the length of the metre for the nation. In the early scenes, we see that Marie has a very precise, organised life: she's recently got divorced, and you suspect that she's happier that there isn't a man around the house disrupting its straight lines.

Obviously, we're being shown all this because the situation is about to change. When Ernst falls ill, Marie has to take over his work, and that includes attending a conference in Paris on the calibration of the kilogram. She packs up Norway's standardised kilo weight in a special case, and heads out for a series of small yet life-changing adventures.

Hamer's humour has always been dry and deadpan, but setting a film in an environment where people are earnestly discussing the correct methods of weighing weights has allowed him to completely geek out to hilarious effect. Granted, not everyone's going to get it: there's one scene where the conference delegates talk about the moral implications of the original kilogram standard weight being locked away as a historical artifact that nobody can ever use, meaning that every other kilogram weight out there is just a rough guess. People started walking out during that bit, and I'm baffled as to why they'd react that way.

Then again, I have been spending a lot of time working in Scandinavia recently. I've always insisted that the Nordic sense of humour is a little darker and drier than what we're normally used to, and it's possible that it's now sunk into my bones and feels perfectly natural. Either way, if this sort of thing tickles you, 1001 Grams is a fine example of the form. Hamer can still set up a joke to perfection, and Ane Dahl Torp gives a finely - ha! - calibrated performance, making the transition between how she behaves at the start of the film and how she behaves at the end seem perfectly natural. In 2003, I described Kitchen Stories as "a film that's pretty much coasting on gentle charm, but it makes a nice change from the exploding Koreans that seem to have taken up a large part of this week." Replace 'exploding Koreans' with 'violently murdered Chinese', and that sums up how 1001 Grams fits into today.