Reviewed today: Guys And Dolls, The Satellite Girl And Milk Cow, The World Of Kanako. 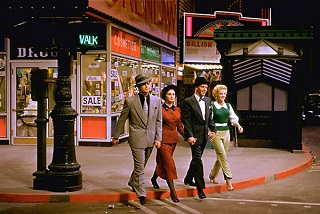 In any other festival year, this would be Clyde Time. A classic musical from the 1950s, lovingly restored, and shown on a Sunday afternoon with an introduction by Clyde Jeavons from the BFI Archives, possibly accompanied by his mate Grover Crisp if it was a print from Columbia. When I spotted the discreet note in the back of the LFF programme saying Clyde was leaving the archive department, I was hoping that meant he still had one festival to go, and this would be his big sendoff. Sadly, I've not spotted him at all this year, even in the audience. Still, his successor Robin Baker does a fine job putting the film into its historical context. No Grover Crisp, though, because there was no Sony involvement in this restoration: this is a Samuel Goldwyn Joint, as is made very clear in the trailer linked to above, which opens with Goldwyn signing a cheque for a million dollars for the rights.

Based on the works of Damon Runyon, and keeping the distinctive overenunciation of his dialogue, Guys And Dolls tells the story of Nathan Detroit (Frank Sinatra), orgainser of New York's most famous illegal gambling event. Needing some fast cash to secure a venue for his next crap game, he approaches legendary high roller Sky Masterson (Marlon Brando) with a proposition, betting that he can't secure a date with Salvation Army preacher Sarah Brown (Jean Simmons). Masterson's got the skills to win the bet, but realises far too late that he's the victim of a much longer con.

If you've only ever seen the film on telly as I have, cropped to fit into a 4:3 window, then this widescreen print is a revelation. And Baker's introduction gives you plenty to think about while the film's running. For example, at the time of its release people were surprised at how well the combination of Brando's Method acting and Simmons' Rank charm school approach worked together in the romantic subplot. But why should that be a surprise? After all, the difference between their acting backgrounds is an almost perfect analogue for the difference between their characters in the film, making it an inspired piece of casting. They're a lovely couple to watch together, hitting an emotional peak during their night out in Havana. (Although it did lead The BBG to wonder out loud, "Do they only have one song in the whole of Cuba?" It makes you wonder how Buena Vista Social Club got so popular.)

You know the film, and this pristine presentation makes everything as glorious as you'd expect, from the sets (overcoming their stylised theatricality by being just so damn huge) to the performances, from the headline stars to the unnamed tall ginge leading the Goldwyn Girls. It's coming out again in cinemas for Christmas this year, and I can't imagine a better present to yourself. 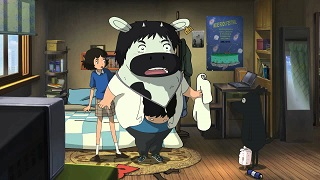 At some point in the future, I'll probably give you a breakdown of the films I've seen this year at the LFF, and how they were split between the various programme categories. But I can tell you up front that Chang Hyung-Yun's animation is the only one we're catching in the Family section. Apart from the absence of the sci-fi season trailer at the start (those shots of the Alien are probably a bit intense for the kids), this turns out to be much like any other screening we've attended in the last 12 days, with a respectable number of little people listening to the subtitles being read out to them over headphones. Because this will make the film easier to understand, apparently.

A musician called Kyung-chun has his heart broken by a girl, and this results in him turning into a cow. As such, this leaves him open to two threats - a giant walking incinerator that's trying to burn him, and a man with a toilet plunger who's trying to steal his liver to sell on the black market. Fortunately, the cow has two protectors on his side: a wizard who's accidentally been recycled into a roll of toilet paper, and a satellite that turned itself into the form of a human girl when it first heard heard Kyung-chun's music. I've missed out a few details here and there, but that's the bare bones of the plot. And God knows how a headphone reading's going to help anyone with that.

Not that I particularly care, because the sheer bonkersness of the plotting is what makes Satellite Girl such a delight. Visually, it's fine, and a rare example these days of properly cartoony 2D animation: the look of the cow is utterly charming, especially when he's trying to use a human toilet. But the story is the main focus here, told in a free-flowing childlike fashion that reminds me of nothing so much as Axe Cop - except the pleasure of Axe Cop is watching the narrative rules being made up as the story goes along, whereas here there's a definite sense of a carefully thought-out world that we're having revealed to us bit by bit. Either way, I kind of wish now that I'd heard what the headphone narrator made of all this. 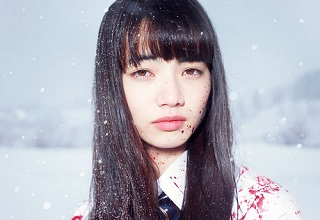 Our last film of LFF 2014: our first Japanese film of the festival, surprisingly: and our first LFF-related visit to Rich Mix, the rather fine cinema/arts complex in Shoreditch with a useful bar just down the road from it. While Brad Pitt and friends are wowing the West End crowds with the Closing Gala of Fury, we're watching the latest movie from director Tetsuya Nakashima, whose career has swung from the brightly-coloured froth of Kamikaze Girls to the psychological horror of Confessions.

It's an understatement to say that The World Of Kanako is closer to the darkness of the latter film than the former. Koji Yakusho plays Akikazu, a former cop whose daughter has gone missing. He's been estranged from his family for several months, and has gone off the rails a bit in the meantime. The search for Kanako will take him backwards and forwards over the past few years, introduce him to her school friends and former lovers, and gradually reveal that he never really knew her at all.

There's no denying that The World Of Kanako starts impressively. There's a terrific sixties-influenced opening title sequence, all monster funk riffs and cheap two-colour animation. And for the first half or so, the film takes a Nic Roeg style approach to chronology: we leap fluidly from one time period to another in a single cut, each shot related to the previous one by the faintest sliver of association in Akikazu's memory. You're left scurrying to keep up with the plot, using the occasional burst of nasty violence as a bookmark to let you know where/when we are.

But all this jumping around in time doesn't mean a thing unless eventually, all these memories coalesce into something important, like they did in Confessions. Here, instead, the violence takes over and escalates into sheer nastiness. Eventually, the film disintegrates into virtual incomprehensibility, using frequent references to Alice In Wonderland as some sort of justification, and unable to decide if we're meant to laugh at the violence or be shocked by it. (Note to the guy at the Rich Mix screening who was laughing at absolutely everything: you're creepy.) By the end, Kanako has degenerated into a cavalcade of gore: which isn't something I'd normally complain about, but it had the potential to be so much more than that.

It's a bit of a downer for our final film of the London Film Festival 2014, but at least most of the others were better than that. You can read all about my favourites in The Wrap Party.