Reviewed today: No Man's Land, We Come As Friends, Why Be Good? 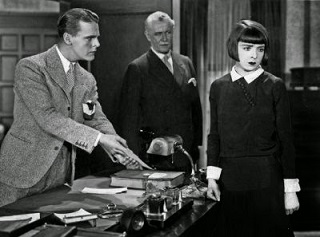 These days, there are two ways you can find out what films are showing at the LFF: via the website, or via the printed programme. I've been doing this for 25 years now - did I mention that? - and I still find the print version preferable, mainly because it has the odd thing buried in there that the web version omits. For example, this paragraph on page 109, in the middle of the list of festival staff: "with enormous thanks to our departing colleagues... Programme Advisor Clyde Jeavons who has shared his passion for archive film, and inspired it in others, over many Festivals."

Clyde's been a mainstay of more or less every LFF I've ever attended: he's been in charge of the archive strand for the whole time, and has nurtured it from a small collection of British restorations to a wide-ranging selection from film archives across the entire planet. He used to personally introduce every archive film in the LFF, and his sheer enthusiasm for old movies - with a particular emphasis on the Westerns that he ensured were somewhere in each year's Treasures collection - was utterly infectious. His contribution to the festival should be commemorated as loudly as possible, and it's a criminal shame that his departure has been so low-key, to the extent that it wasn't initially clear whether LFF 2014 would be his lap of honour or not.

So far, it would appear not - I haven't seen him at any of the Treasures this year, all of which have been introduced by other members of the BFI Archive team. Bryony Dixon does the job today, and gives some interesting background to the restoration we're about to see (in sufficient detail to make it less of an issue that we arrived five minutes late, sorry about that). We get a supporting short as a bonus: a fragment from the 1927 silent La Revue Des Revues, most notable for the appearance of Josephine Baker in a dance number called The Plantation. Filmed in grungey Pathecolor - and it's astonishing to realise that since last night's lecture, I've become a colour process snob - it's most notable for the whole peculiarity of it being a silent dance film, meaning that piano accompanist John Sweeney has to come up with his own backing and make it fit.

Rather like the multiple colouring systems discussed last night, the late 1920s saw a variety of solutions to the problems of sound in film, with live accompaniment just being one of them. The Vitaphone process used by today's main feature, Why Be Good?, was another one. It's a halfway house between a silent and a full talkie, with non-synchronised sound provided on a series of sixteen-inch discs. The discs provide music, and sound effects that occur roughly at the same time as the action on screen: the dialogue is left to intertitles. It's the first time I've seen one of these non-sync sound pictures, and it's a fascinating hybrid - the lack of dialogue and constant music almost gives it the feel of a live-action cartoon.

In the specific case of Why Be Good?, the soundtrack is made up of 1920s jazz dance hits, inspired by the film's multiple nightclub scenes: this has the peculiar effect today of making the movie sound like mid-period Woody Allen. It's the story of a flapper called Pert Kelly (Colleen Moore), who's very much a woman of her time - "this is 1929, not 1899!" she yells at her father at one point. She's out on the town most evenings Charlestoning like there's no tomorrow, and on one of these nights out she encounters an interesting man. It turns out that it's Peabody Jr. (Neil Hamilton), who's savouring one last night of freedom before taking on a management job in his father's department store - coincidentally, the one where Pert works herself as a shopgirl. The two of them hit it off, but neither of their fathers is keen to see the class divide being bridged like this.

One of Clyde Jeavons' common themes in his archive programming was American cinema in the four years prior to the introduction of the Hays Code - it would now appear that this NFT season was his parting gift to us. Why Be Good? was made in 1929, just before what we think of as the pre-Code era, and it has to be said its moral compass appears to have been stored too close to the iron filings to have any degree of reliability. On the one hand, every single bit of dialogue appears to have a sexual subtext: on the other, when Peabody finally makes his move, the camera stays locked on Pert's horrified face, rather than risk showing us the hotel bed he's indicating. You could suggest (as The BBG does) that Pert's big speech towards the end has a distinctly feminist slant to it, as she complains about the way women have to defer to men's requirements in every aspect of life. And then a few minutes later we discover the solution to Pert's moral dilemma, which throws that theory out the window. Still, it's these internal contradictions that make the film so enjoyable to watch now, along with that newly-recovered jazz score and Colleen Moore's delightfully cheeky performance. 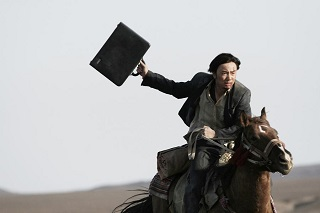 The dividing line between Mainland China and Hong Kong gets more unclear by the day, as you've probably noticed from the news: and the same applies to their movies, too. This particular one appears to be a Mainland production with some HK money thrown it - and as a result, we get the delightful reappearance of the Golden Harvest studio logo at the start, along with what appears to be around a dozen other production partners.

The programme description of No Man's Land describes it as a Chinese spaghetti western, which feels a little lazy even though you can see where they're coming from - there's a twangy score, a desert setting and a couple of bits with horses. It's the story of big city lawyer Pan Xiao (Zheng Xu), who's travelled out to the back of beyond to defend a falcon rustler on a cop-killing charge. Once the trial is over, he has to make his way across the Gobi desert to get back home again. A couple of chance encounters with the wrong people - a pair of slobby and violent truck drivers, and the family of con artists that runs a rest stop - will make that journey increasingly difficult. Not to mention that falcon rustler, who's still chasing after the man who got away with his prey.

Spaghetti Western comparisons may be a little glib, but the other point of reference that everyone brings up at this point is Blood Simple, and that one's a little harder to ignore. No Man's Land shares a lot of DNA with the Coens' debut. Bad things happen to people who don't really deserve them; a tiny error of judgment escalates into a full-blown nightmare; the appearance of a corpse becomes less of a tragedy, and more of a problem that needs to be solved by any means necessary.

This potentially unpleasant material became funny as hell when the Coens took it on, and director Hao Ning pulls off a similar alchemy here. The trick is to never give in to the temptation to make things gratuitously nasty, no matter how horrible the characters are - the comedy comes from the increasing discomfort Pan Xiao feels as he's taken further and further out of his comfort zone. At the same time, it doesn't lose its nerve, gleefully making things worse and worse as they go and only releasing the tension when it absolutely has to. It's surprisingly dark for what's officially a Mainland production, and it doesn't come as too much of a surprise to learn that the Chinese censor has been fiddling with the film for about four years before finally allowing its release. Still, what we've been allowed to see would be jaw-dropping stuff regardless of its country of origin: from China, it's an extraordinary satire on what people will do when pushed too far. 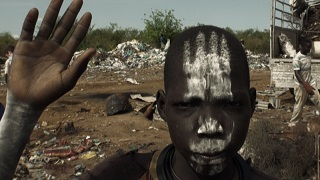 Shocking discovery of the day: Darwin's Nightmare was ten years ago. Hubert Sauper's eco-documentary didn't make it into my picks of 2004, but I was very impressed with it at the time. And I wasn't the only one - the film was mentioned several times in a recent Sight & Sound article on the greatest documentaries ever made, reaching joint 14th position in a poll of filmmakers.

Hubert Sauper has returned to Africa for his latest film, a full six years in the making. He's travelled there in his own home-made light aircraft, flying around southern Sudan in the runup to the country's independence referendum. He talks to the people living there, and discusses their hopes and fears for the future. But there's also an increasing number of foreigners coming over with their own agenda. Hilary Clinton, talking to Americans interested in investing in Sudan, has said that they shouldn't just aim to do well, they should do aim to do good: Sauper's interest is in the slippery nature of the dividing line between the two.

As he talks to a variety of interviewees, it's sometimes hard to tell exactly which side of the line they sit on. The Chinese scientific team, who reflect on American colonisation via an allegorical discussion of Star Trek. ("Did you know that white men own the moon now?") The ex-army guy sweeping the fields for landmines, trying to work out why this country is a couple of hundred years behind the rest of the world, and coming to the conclusion that it must be what they want. The Christian missionaries who are easily the creepiest bastards in the whole film, casually saying at one point "the people here don't have the same attitude to property ownership that we do..." Okay, sometimes deciding which side of the line they're on isn't that hard.

If we have to get into comparisons, then there's no denying that Darwin's Nightmare was a better film: it had a strong narrative thread, building towards a single shocking revelation of a massive injustice. We Come As Friends has a more pointillistic approach to the colonisation of Sudan, building up a picture through a series of short, unrelated character sketches, and sometimes that lack of laser-sharp focus works against it. But the other strengths of Sauper's earlier film are definitely visible here. He has an eye for ravishingly surreal imagery, and the frequent wonky-angled shots of Sudan taken from his plane are beautiful to look at. His sense of dark humour is always to the fore, his camera frequently wandering away mid-interview to focus on a telling background detail. And the sheer detail of his research results in some astonishing on-camera revelations, like a Sudanese chief finally reading the contract where he signed away 600,000 hectares of land to the Americans for a measly twenty-five thousand dollars. This is a fascinating film that deserves a wider UK release than the one night on BBC4 that Darwin's Nightmare got: let's hope it gets one.