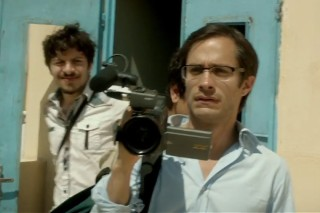 I don't do galas these days.  They're massively overpriced for what you get: from what I understand, you're not even guaranteed free chocolate and water any more. Nevertheless, the chance to rub shoulders with big stars always has its appeal, so this year the one gala that The Belated Birthday Girl and I applied for was Rosewater, the directorial debut of The Daily Show's Jon Stewart. Inevitably, last Sunday's screening sold out in no time, as Stewart's got a lot of fans over here. By the time the press return tickets had gone on sale, we'd already made other plans: after all, we've seen Stewart before (he's a tiny wee man), but we hadn't met Donnie Yen. Still, this afternoon screening works just fine: you don't get to be in the same room as Jon Stewart, but you get to see the film, and it only costs nine quid.

Rosewater is inspired by a real-life event that's kind of Jon Stewart's fault. It's the story of Iranian journalist Maziar Bahari (Gael García Bernal), who's based in London but currently back home covering the 2009 elections. The general consensus is that Ahmadinejad is on his way out, so when he unexpectedly declares victory things start to turn ugly, with accusations of fraud flying around. Bahari covers all this with his camera and sends his pictures back to London. A few days later, the Revolutionary Guard pays him a dawn visit and locks him up on suspicion of being a spy. Their key piece of evidence? A comedy interview he gave to The Daily Show With Jon Stewart, where he was asked by Jason Jones in full idiot mode if he was a spy. Bahari will eventually accuse his captors of "a failure of imagination," and their refusal to understand what was going on in that interview is just the first of many examples of that failure.

This is Jon Stewart's first film as both writer and director, so he obviously felt a deep personal connection to this story to want to tell it in this way. On the whole, he handles the job well for a first-timer. His script covers all the key issues without ever getting preachy, and manages to include a surprising amount of humour considering the potential grimness of his subject - in fact, the personal turning point for Bahari comes when he realises he can laugh at the ridiculousness of his situation. The visuals are solid and unobtrusive, apart from a few attempts to integrate social media into the storyline that will probably look horribly dated in a few years: hashtags literally flying around the streets of Tehran, that sort of thing.

Stewart's smartest move is to get a couple of great actors, stand back and let them do their job. Bernal is as charismatic as ever in the lead, and that comes as no surprise. But the bulk of the story here involves the power play between Bahari and his rosewater-scented interrogator, and Kim Bodnia is a revelation in the latter role. He's best known as the flawed randy cop Martin Rohde in The Bridge on TV, and many fans were worried a few months ago when it was announced that he was dropping out of the show owing to disagreements over his storyline. But on this evidence, he's got a future in Hollywood movies all laid out for him, as he reveals a steely core that drives all memories of Martin out of your head completely. The film stands or falls on the scenes between Bernal and Bodnia, and they're a perfect match for each other. Although The BBG does worry about how Iranian racial identity is such an unfamiliar quantity in the US that they think Mexican and Danish are acceptable substitutes... 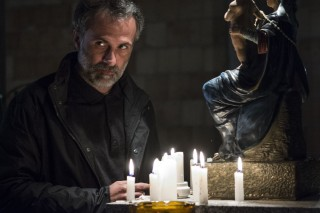 Just before this film starts, The Belated Birthday Girl says something out loud that both of us were thinking - given the choice between a few possible films in this slot, we may have gone for the Italian one mainly because it's nice to see Adrian Wootton doing the introductions. Well, there are worse reasons. Although at least one of my Italian Pals would probably be irritated to see that the film we've chosen is yet another Mafia drama. (It's a similar story with one of The BBG's Japanese teachers, who's fed up with the amount of her national cinema dedicated to stories of suicide.)

Black Souls is an unusual addition to the genre, however, as it focusses on the Calabrian Mafia, which makes a change from all the Sicilians we're used to seeing and gives us some unexpected scenery to look at. But the key elements you'd expect are all there too. There's an extended family at the core, headed by the three Carbone brothers, each of whom has their own attitude to the family business. Luicano (Fabrizio Ferracane) has turned his back on it almost completely, and has withdrawn to the mountains to tend goats. His son Leo, however, is more interested in what his two uncles are up to. Thus there's already tension inside the family, which inevitably can only increase when the rival Baracca family decides to escalate a minor disagreement into something more dangerous.

Director Francesco Munzi takes his time setting up the family and their relationships. Possibly a little too much time, as far as I'm concerned, as the opening 45 minutes or so becomes the point where my mid-festival tiredness turns into full-on nodding off. In those early stages, despite the unfamiliar setting and a couple of cultural differences, there's very little to separate Black Souls from any other mob flick. But paradoxically, once the expected gang war starts to kick off, the film starts to surprise you, mainly by keeping you guessing on which is the more dangerous conflict - the one between the Carbones and their enemies, or the one between the Carbones and themselves. The second half shows an admirable willingness to give you something other than what you might be expecting, with a finale that simultaneously comes out of nowhere and has been foreshadowed throughout. Trust me, I was completely awake by the end. 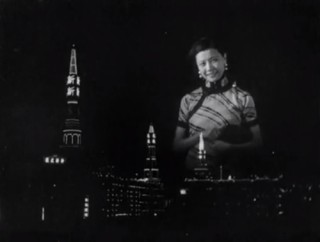 As I said before: I don't do galas these days. The one exception to that rule in recent years has been the Archive Gala, usually the chance to see a restored silent with live musical accompaniment. Sadly, this year's selection doesn't really grab me. But this turns out to be a perfectly wonderful alternative: a little-known silent classic (little-known in the West, anyway), presented as the climax of the BFI's extended Chinese season, with a full orchestral accompaniment, for the bargain price of fifteen quid.

Wu Yonggang's 1934 film is the story of a prostitute, the goddess of the title. Played by Ruan Lingyu, she's trying to balance the dual challenges of staying out of trouble with the law, and raising a small boy on her own. Life is already a struggle for her, but when she falls into the evil clutches of Boss Zhang (Zhang Zhizhi), things go from bad to worse.

Inevitably, this is melodramatic as hell - our heroine is, well, a goddess, while our villain has no redeeming features whatsoever. The whole film is basically an excuse to heap as much misery onto Ruan Lingyu's character as possible: she was famous for her melancholic look, and she spends at least half of her screen time doing just that directly into the camera. But the story still has dramatic force, some 80 years after it was made: a series of moral dilemmas is presented, and her choices are clearly depicted without judgment.

Technically, it's fascinating to watch. Obviously by 1934, silent films were dying a death in the West: China had had talkies since 1931, but this film shows their cinema in a transitional phase, with visual sophistication close to what Hollywood was producing at the time. The musical score at this screening - written by Zou Ye and performed by the English Chamber Orchestra - is a fine bonus, blending Eastern melodies and Western orchestration without going too much in either direction. This is probably as good as an 80-year-old film is likely to look: but if you missed it, the out-of-copyright YouTube copy above will just about do, though the music isn't as good.

The Belated Birthday Girl - 'Stray Dog' is the nickname of Ronnie Hall, biker, Vietnam veteran and subject of Debra Granik's documentary. Over the course of the film, we follow Ronnie and his fellow bikers and veterans of various conflicts, and see them attend memorial services and support groups for veterans and the families of casualties and missing POWs. We also meet Ronnie's family, and particularly his Mexican wife and her 19 year old twin sons, who they brought to America to live in a caravan in Ronnie's RV park.

Very much an observational portrait of Ronnie, building up a picture of him through his actions and relationships, Stray Dog is always watchable but lacking any major purpose for me. The main feeling I came away with was feeling sorry for the Mexican boys - Jesus and Angel - as they are uprooted from their life in Mexico City to live in a trailer park, far from their friends and the comforts of their city life.