Reviewed today: Birdman, The Dawn Of Technicolor, Walking Under Water. 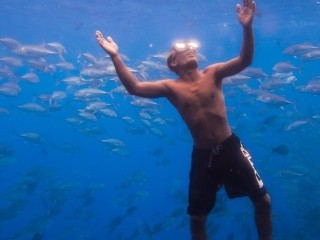 Given that one of the key benefits I associate with the London Film Festival is taking time off from my Moderately Responsible Job In The Computer Industry, it's a little ironic that I frequently end up watching documentaries showing what other people working looks like. Possibly the most extreme example of that was Double Tide a few years ago: a pair of single take long shots of a woman picking clams, that straddled the awkward border between cinema and installation art. By comparison, Walking Under Water is like a Michael Bay film or something, although even then it takes a while to get going.

Director Eliza Kubarska follows a number of weeks in the life of a fishing family - you'd only know that if you attended the Q&A afterwards, as it's depicted as a period of three days in the film, and it's not the only bit of manipulation going on here. The Badjao (also known as Sea Nomads) are based close to Borneo, living off waters bordered by three countries but owned by none of them. We follow Alexan as he goes out in his delapidated boat to catch fish. He's working with an antiquated compressor rig to allow him to dive underwater, and is bringing his young nephew Sari along to show him the ropes, or more accurately the hose.

For the first hour or so of the film very little happens, and as long as you're prepared to settle into its pace you'll be rewarded with a window on an unfamiliar culture combined with some spectacular undersea photography. But there's still the nagging suspicion that all this footage of Alexan walking round under the sea is a bit light on shots of him actually catching fish. And in the last 15 minutes or so, the film suddenly and surprisingly discovers a narrative thread - several of them, in fact. We see Sari's first time underwater, and how that goes: we discover just how good a fisherman Alexan actually is: and finally (which is, you suspect, the real point of the film) we discover the extrordinary truth about what's just around the bay from the shanty town where they live.

It makes for a curiously lopsided structure, and that's leaving aside any concerns over how much of this has been staged for the camera. Producer Monika Braid insists in her Q&A that it's all real, but from the outside this looks as structured as an episode of TOWIE. It's also worrying to learn that the family wasn't paid for their contribution, just given a new boat, which is a bit rich seeing as the failure of their old boat is a major narrative thread. Despite all those caveats - and I admit it sounds like a lot of them - this is an enjoyable film made by people whose hearts are in the right place. Although it's a bit disappointing when they hand you leaflets on the way out boasting about their fundraising campaign to send Sari to school, and when you get home you find that it closed a few months ago. 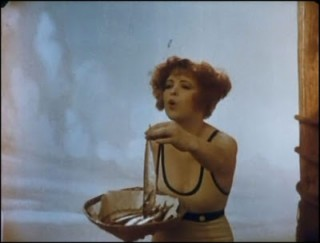 I do like the live events at the LFF: primarily because unlike the films, you can't experience them anywhere else. So it's surprising that this is the only live event I'm going to this year. Partly it's down to the way the scheduling has changed, I guess. Generally, the masterclasses are announced late these days, after the publication of the programme - and as everyone's encouraged to buy tickets the second they go on sale, when an interesting talk is announced, I'm usually already booked to do something else. (Case in point: Jon Stewart's discussion with Maziar Bahari on Sunday, which clashed with 1001 Grams.)

Still, this one turns out to be a popular event, so much so that it's been moved from NFT3 to the larger NFT1. The Technicolor process has its 100th birthday next year, and one of the events to celebrate this will be the publication of a book by James Layton and David Pierce: in this illustrated lecture, Layton and Pierce present some of the material from it. In fact, this particular talk could be more accurately described as Technicolor: The Brown Years. We all remember the process in its 1930s heyday, and the vibrant use of colour in the films of that time. But all those films were made using the Technicolor three-strip process, where the image is split into three colours and then recombined. This lecture focusses on the fifteen years prior to the development of that system, when colour was achieved using just a red/green split, with all the muddiness that entails.

We're shown a simulation of an early predecessor - Kinemacolour, a process using black and white film with a series of rotating red/green filters applied to both the camera and the projector. The results are flickery, badly coloured and hard to watch (though one audience member insists the real thing isn't quite so bad, and this simulation is little more than 'Technicolor propaganda'). Nevertheless, this became the starting point for the process developed by Kalmus, Comstock and Wescott, which would use prisms to provide a more stable split of the red and green elements. By 1915, the technology was sufficiently advanced that a feature film could be made using it. Inevitably, The Gulf Between turned out to be a massively troubled production, with shooting and processing proving much slower and more expensive than a traditional black and white film.

Layton and Pierce walk us through the highlights and lowlights of the next 15 years of Technicolor. The complete reworking of the process following The Gulf Between, including the innovation of applying colour to the film rather than using filters: the experiences of early adopters like Cecil B. DeMille and Douglas Fairbanks: the rise of dedicated Technicolor technicians like cinematographer Ray Rennahan: and the transitional period in the late 20s where the process was used alongside other colouring techniques, sometimes in adjacent shots in the same film. And there are plenty of clips to illustrate the evolution of Technicolor as they go, from a fragment of the Clara Bow short Red Hair to a whole cheesy musical comedy short, The Sultan’s Jester. The final irony is that for all the advances made in colour over the fifteen years covered in this lecture, it was the dawn of talking pictures that finally made it a going concern. 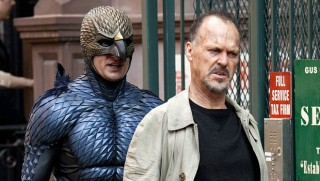 Back in the 80s and 90s, the rules for the Surprise Film were straightforward: it would be an American movie, and one that was already out in US cinemas. Effectively, it was making the most out of the irritating window between a film's US release and its UK release. Nowadays, that window is either tiny or doesn't exist at all. So for the last few Surprise Films, things have changed: it's now usually one that's currently doing the rounds of the festival circuit which hasn't seen the inside of a commercial cinema yet.

This is why I was pretty confident that Paul Thomas Anderson's Inherent Vice would be the 2014 surprise, hot from its recent premiere at the New York fest. I was also considering the possibility of Alejandro González Iñárritu's Birdman as another likely candidate: but then it was announced that Birdman would be the closing gala at Leeds, and presumably only an utter bastard of a festival would steal another festival's UK premiere from under its nose.

Anyway, let's put to one side that this is the most wrong I've ever been about an LFF Surprise Film (in that I was actively telling people beforehand that it definitely wasn't Birdman) and look at the film itself. Riggan Thomson (Michael Keaton) is an actor desperate to regain some credibility. All anyone really remembers him for is his starring role in the Birdman superhero franchise two decades ago, and he's hoping that his writing, directing and starring in a Broadway play will reignite his career. As the first preview approaches, things aren't looking good: the critics already have their knives out, his family resents him, and one of his co-stars has just had his head smashed open by a falling stage light. Worst of all, the injured actor's been replaced by Mike Shiner (Edward Norton), a method arsehole who threatens to tear the entire production apart. The one glimmer of hope is this: Thomson just might have super powers.

I miss the old pre-internet days, when a surprise film would appear on screen and you wouldn't have the faintest clue what to expect - like Birdman's subtitle suggests, ignorance has unexpected virtues. In this case, I knew the basic premise of Birdman in advance, and I knew Iñárritu was delighted to be working with Emmanuel Lubezki, the cinematographer responsible for all those long takes in Gravity. I hadn't, however, realised that this would turn into a dick-measuring contest with Alfonso Cuarón. Birdman's commitment to the long take is its most extraordinary feature, and part of the surprise is seeing just how long Iñárritu can run without making a visible cut. But here's the odd thing: the photography combines with the backstage setting to make the film less cinematic, rather than more.

If there's one thing Birdman is obviously striving for, it's a sense of relentlessness: the constantly moving camera, the refusal to pause for breath, the continuous percussion score. The latter in particular reminds me of Punch Drunk Love, a film so oppressive in its one-damn-thing-after-another nature that it strangles any actual comedy at birth. Birdman is a comedy - it's got actual jokes, a rich sense of the traditions of the backstage farce, and a wild surreal streak that comes out when you least expect it - but there's just so much being hurled at you that it's impossible to laugh.

Not that I'm saying Birdman's a bad film, you understand. It's an amazing technical exercise, and the whole cast is terrific. I'm glad I had the chance to watch it, and felt I'd seen something extraordinary by the end. And yes, it's absolutely a great choice for a Surprise Film. Don't ask me to watch it again, though.