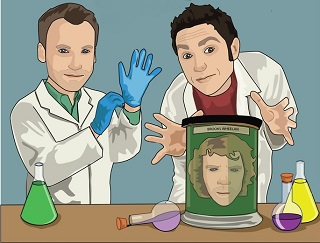 In the meantime, your Simian Substitute Site for January 2015 is Probably Science #144. When I realised just how rubbish the in-flight entertainment was on Finnair, I spent most of the flight home listening to podcasts on my phone instead. The final episode of Serial was one highlight: this was another. It's an episode of Probably Science, the weekly science-based comedy podcast from Andy Wood, Jesse Case and England's own Matt Kirshen. This one features guest Dr Christina Campbell, who talks in detail regarding her research into spider monkeys. As her key area of expertise is in their reproductive habits, things do occasionally get a little rude. But there's a lot of fascinating hard info in here, including the revelation of something called The Drunken Monkey Hypothesis. The other episodes of Probably Science are well worth a listen: to get the most out of this one, you should be aware that Jesse had to leave the previous episode early owing to a horrid-sounding problem involving kidney stones. (It seems to be a lot better now, no thanks to the American healthcare system.)

Here's a New Year's resolution suggestion for you: how about you leave some more comments this year?