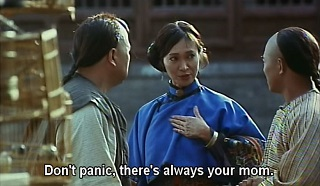 M is for the Mostly Pop it gave us
O because it's nearly four years Old
S is for the Subtitles we crave less
T for all the Television gold
L is for the Love we showed on Sunday
Y? Because we're celebrating mum
Put them all together, they spell MOSTLY
So stick your Film Divider up your bum

It was Mother's Day yesterday, and Europe's Best Website celebrated with The Mummies Return, in which a bunch of us wrote about our favourite depictions of mothers in the movies. Quite a few old favourites appear in the list - my choice is probably the most obscure of the seven, I guess. It's a fun diverse read, and well worth a look even though the occasion itself is now behind us.

I'm not digging too hard for Red Button Bonus Material, as the majority of the words in the piece aren't mine: so have a few trailers, why don't you?

Chasing The Colonel: Christmas In Japan {aka Rising Monkey 2014 part 2} 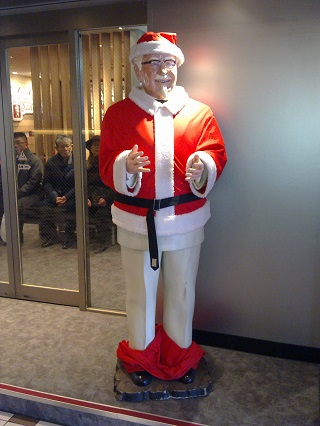 Think of the primary visual signifiers we associate with Christmas. Not the ones relating to, y'know, Christ or anything like that: the other ones. The jolly old man with a white beard. The red and white colour scheme. The consumption of poultry. Put them all together, and they sort of explain why one of the major traditions associated with the festive season in Japan is KFC. Yes, that KFC. The Japanese may not celebrate December 25th as a holiday, but on Christmas Eve families make a point of buying massive boxes of fried chicken to eat at home that evening. Based on that one piece of information, my niece thinks that Japan sounds like the best place in the world to be in December. Your mileage may vary.

What's Japan like on Christmas Day? You're about to find out, as part two of our Japan 2014 journal finds us taking the train out of Tokyo and heading towards the Tohoku region, the area of the country that was hit by the tsunami in 2011. By accident rather than by design, this page is going up on the fourth anniversary of the disaster. It doesn't get more festive than that. 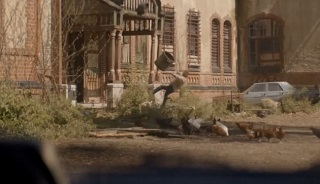 It's Monoglot Movie Club time again on Mostly Film. Yes, I know it's only been a month since the last one, but that was Christmas - this one covers February, when I spent a week in Denmark for work and saw a couple of pretty good films along the way. The resulting piece, The Copenhagen Interpretation, is mainly notable for the appalling gag involved in its lead image, which requires an understanding of both particle physics and American TV in order to fully appreciate it.

I haven't really got any travel tips for you this time round - like my previous Copenhagen visit, I stayed at the Cabinn Metro and saw the films at the Palads. So the Red Button Bonus Material for the piece will have to be a collection of trailers and other related video bits. 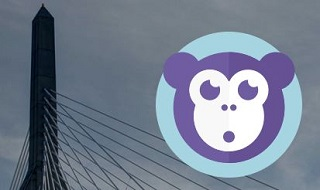 Books: In a move that is both understandable and regrettable at the same time, the paperback edition of Viv Albertine's autobiography has been retitled from Clothes Clothes Clothes Music Music Music Boys Boys Boys to the far less fun Clothes Music Boys. Albertine was the guitarist in the Slits, and living proof that punk rock wasn't always the total societal upheaval that everyone claimed it was, with many punks refusing to take the idea of an all-girl band seriously. Listen back to their records now, and they were making music as radical as the likes of Wire, with the added complication of doing it backwards and in high heels, as they used to say about Ginger Rogers. Albertine structures her life story in two convenient chunks, labelled Side One and Side Two: her post-punk experiences are just as fascinating as her period in the limelight, as she spends thirty years trying to work out what she should do next. Showbiz autobiographies can sometimes intimidate with the sheer force of will people expend to achieve their goals: it's actually refreshing to read the words of someone who, like most of us, has to struggle to work out what their place in life is. Her voice on paper is a lovely thing: warm to the people she loves (notably Sid Vicious, depicted here for a change as a bright kid who got too caught up in his Situationist pranks), splendidly bitchy to the people who did her wrong. Why couldn't Morrissey pull that off in his book?

Movies: Kim Longinotto's documentaries have featured here on a number of occasions in the past, with reviews of LFF screenings of Sisters In Law, Hold Me Tight Let Me Go and Pink Saris. 2015 is turning out to be a busy year for her: later in March her Sundance award-winner Dreamcatcher hits UK cinemas, but it's already her second release of the year. The first, Love Is All, is a bit of a departure from Longinotto's usual depictions of women working to improve the lives of others: it's made up entirely of archive footage, raiding the BFI's library to show how love has been captured on film over the last 100 years. With no narrations or captions to set the context, it's down to Longinotto and her editor Ollie Huddleston to arrange these clips in a chronological format, and attempt to fit a narrative around them: one that shows how our view of romance has changed over a century. Anyone who's spent time dabbling in the BFI archive will find some of the clips familiar - a couple of the more melodramatic ones come from one of my favourite BFI DVDs, The Joy Of Sex Education - but unexpected juxtapositions wring new enjoyment out of them, aided by a robust collection of Richard Hawley songs on the soundtrack. You've missed Love Is All in cinemas, and it won't be released on DVD till the autumn: but thanks to its recent TV screening in the Storyville strand, UK residents can watch it for free on the BBC iPlayer until March 23rd. There. You've got no excuse now.

Music: There's a strong nostalgic component to what Public Service Broadcasting do. Their modus operandi of building tracks around samples of dialogue from news broadcasts means that their songs always have some sort of historical context. But for me, there's also the historical context that in the late eighties, nearly every other record I bought was constructed around spoken word samples. Combine that with the subject matter of their new album The Race For Space - covering the US and Soviet battle to send humans further out from the surface of the planet than ever before - and the result is pretty much tailor made for me. They've released the most attention-grabbing numbers as singles: the fantastically funky beats and horns of Gagarin, and the brilliantly edited tension of Mission Control on Go! But there are plenty of more subtle highlights on the album: the slow inexorable build of Sputnik, and the return to the control room in The Other Side. If you're based in London and you've only just discovered them like I have, then you'll be enraged to discover that the Roundhouse show on their forthcoming tour has only just sold out. The rest of you should check out asap if they're playing near you: if their threat to add visuals to this music is genuine, these shows could be one hell of a thing.