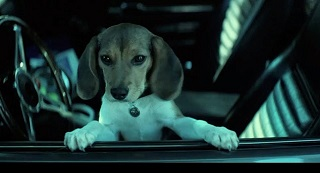 Most of my contributions to Mostly Film are event-driven - either documenting films I've seen on a trip abroad, or covering what's showing at a festival. It's not too often that I get to write about a current theatrical release, but it does happen once in a while. This week, I've contributed a review of John Wick, the new Keanu Reeves movie that opens in the UK on Friday April 10th. The review's titled Dogs In Refrigerators: both the title and the header image may require you to read this and this before they make a lick of sense.

In brief, I liked John Wick a lot when I saw it, even though it was only on a seven inch screen on the back of an Emirates plane seat. It obviously owes a huge amount to one of my favourite genres of cinema - the action movies that were coming out of Hong Kong in the latter half of the 1980s, particularly those made by John Woo. So - with the caveat that scenes of Strong Bloody Violence are about to follow - the Red Button Bonus Content for the John Wick review will consist of a few of my favourite John Woo sequences, so you can see where directors Chad Stahelski and David Leitch have been getting their ideas from.

The obvious place to start is A Better Tomorrow, the 1986 film that established the careers of both Woo as a director and Chow Yun-fat as an actor. You can pin it all down to one scene, in fact, coming about a third of the way into the movie. Press the Play button below, and you can literally watch Chow Yun-fat turn from a character actor into a movie star over the course of four minutes. (Oh, and you see that cop who comes in to investigate the carnage in the final shots? That's John Woo himself, doing a Hitchcock.)

A Better Tomorrow was a huge box-office hit, and the streets of Hong Kong were soon flooded with young men wearing Chow Yun-fat's trademark leather coat from the movie, which is a perfect way to kill yourself in Hong Kong's climate. Within a year, there was the inevitable A Better Tomorrow 2, in which Woo had to jump through all sorts of terrible narrative hoops to get around the problem that the original wasn't written with a sequel in mind, if you know what I mean. Everything is bigger and dafter, as is the way with sequels, and that applies doubly to the climax.

A couple of years later came The Killer, the first one of Woo's bulletfests that I ever saw. By this stage he's become a much smarter filmmaker - there are actual dynamics in the action here, with highs and lows and character work running all the way through the climactic scene here. It's amusing to note that the most shocking piece of gunplay involves the destruction of an inanimate object rather than a human being.

But if we're talking scenes from Hard Boiled, this is the big one. And you'll know why once you've seen it.

I couldn't possibly suggest that there's anything in John Wick that can touch those scenes up there - but at least they're having a go. There are some huge full sequences available on the internet, but I think that's a bit iffy for a current release, so have a fun behind-the-scenes montage instead. And then go see the film, obviously.