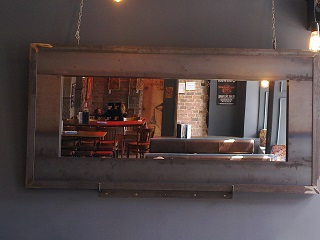 About fifteen months ago, a Dundee coffee house called Caffe Borsa shut up shop. You can still read the Facebook post where they announced that their lease had been acquired by BrewDog, who were planning to open a new bar in its place. The comments are amusing, as several of them are from disgruntled fans of the cafe who assume that BrewDog just barged in and stole the building from its owners. The general vibe is that a huge corporate bully has driven a small local business out of their premises, which is funny given that BrewDog tend to portray themselves as being on the other end of that sort of conflict.

On our way to investigate our twentieth bar in their portfolio, The Belated Birthday Girl and I stopped off in Aberdeen to attend BrewDog's 2015 Annual General Meeting with six thousand other shareholders. This time last year, it was four thousand. It seems to me that it's too late to be thinking of BrewDog as a small local business.

So, this review of the bar will inevitably be partly (mostly?) a review of the AGM as well. It's the fourth one of these jobbies we've attended, and year by year they've been getting bigger and bigger. We spent quite a bit of our non-BrewDog related time in the Belmont Street area: sleeping in the cheap but perfectly fine Aberdeen City Centre Hotel, having a much-needed Sunday morning fry-up at Cup, and scoring a magnificent Indian dinner at Shri Bheema's. As for topping up on booze, BrewDog Aberdeen was inevitably rammed for the AGM weekend, with equally good beer - but better chances of a seat - to be found nearby at Six Degrees North and CASC. (Huge thanks to Ricky for nagging us until we finally got to see how good CASC was for ourselves.)

But the main focus of our two-night flying visit to Aberdeen was the hop-scented Nuremberg rally (or N-urine-berg, to quote Ricky again) that is a BrewDog AGM. You may remember the headlines from last year: queues of about 45 minutes to get to the bar, tasting sessions where you had to book without knowing how late in the day you'd need to stick around for them. To be fair, both of those issues were resolved this time round. The bar waiting times, in particular, were reduced down to single digits by the simple action of increasing the number of bars from two to seven, including a can dispensary and a beer lorry known as Truck Norris serving just the most popular brews. There was some disgruntlement over the solution to the tasting session issue, or at least the bit of it that involved charging you five quid to attend one. But we were all given plenty of warning of what beers would be available at each, and could make an informed choice accordingly - the Ballast Point tasting we went to mid-afternoon had their splendid Victory At Sea Imperial Porter on offer, and that did us just fine. (In fact, the dark beers were generally the best drinks to be had at this AGM, with the exception of Mikkeller Black 2014, which seems to be just squid ink mixed with meths.)

To quote me from last year: "Get those things fixed... and they'll have a perfect day out on their hands. (Unless I end up writing about a whole new series of problems next year.)" So what do I get to complain about this time? Well... not much, really. After a few years of playing with the organisation, it looks like they may finally have it nailed. There are still some flaws, most notably the limited options for vegetarian food (a point we'll come back to later). Or the rather dull selection of identikit guitar combos occupying the main stage after the presentation (the days when a ska band like Bombskare could headline one of these events seem long ago). Or the presentation itself being light on detail and heavy on hamfisted patter. (At one point, James described something as being "more like Foo Fighters than Justin Bieber," as if there was some difference in credibility between the two.)

But the event itself - the opportunity to hang out with like-minded people and drink tasty beer - that all went very nicely indeed. If anything, the biggest misstep came when they literally launched the new version of the shareholders' website from the stage, and then ran off before anyone could log onto it and discover that it had been coded by half a dozen toddlers smearing jammy fingers over the family iPad. (Three weeks on, it's had a few tweaks applied but is still functionally bollocksed. Nobody wants innovation in forum software, they want a forum that works. Is that so hard?)

We awoke on Sunday morning with fairly raucous hangovers. As you'd imagine, we weren't the only ones. The aforementioned Cup cafe gradually filled up with guys in Punk IPA t-shirts prodding their breakfast sausages gently with forks, for fear that the noise of the skin breaking would make their heads explode. The train to Dundee had several people swapping stories of the previous day's adventures, but very quietly. With this amount of restraint on display, it's not really that much of a surprise to walk into BrewDog Dundee and find it virtually deserted, as both potential punters and staff were either still in bed or making their way back from Aberdeen.

As we rewarded our relative healthiness with a pair of pints of 5AM, we looked around the bar. We'd been primed by a couple of people in advance and knew what to expect: it's a comfortable size, not as cramped as Leeds but not as gaping as Shepherd's Bush, with good use of booths to break up the space. On the day we visited, there was a small exhibit from local crafty person Suzanne Scott aka WhimSicAl LusH (she has a monthly pop-up shop there): a couple of days earlier, the good chaps from the Weird Beard brewery had run a tap takeover, as part of a whistle-stop tour of the Scottish bars on their way to the AGM. So there's plenty of stuff going on on the days when people aren't struggling with their hangovers.

We only had a couple of hours before our train out of Dundee, so we'd planned all along that we'd use the time in BrewDog wisely for a couple of pints plus lunch. That, unfortunately, was where the whole plan fell apart. Remember that thing I said earlier about the tiny amount of vegetarian food available at the AGM? It's a problem that tends to reoccur in many of the BrewDog bars, with the odd notable exception like Liverpool - and it turned out to be a serious hassle in Dundee. The bar doesn't have a kitchen, so it relies on food deliveries from a couple of external sources: Pieminster for pies, and a local bakery for fascinating-sounding beer-infused cakes. Neither of them deliver at weekends. So, no cakes at all on Sundays: and only a couple of meat pies left in the fridge, as the veggie ones had apparently all been eaten by those beardy London blokes who came up on Friday.

So that's why this review of BrewDog Dundee is based solely on the half-hour it took us to drink that first pint. We wanted to stay longer, but we needed food, and as far as The BBG was concerned they didn't have any. Still, there was an upside to this disappointment - without it, we wouldn't have discovered Project Pie on Reform Street just around the corner. It's hard to believe that it was nearly five years ago that we stumbled across Illegal Jack's in Edinburgh - recently closed down by arseholes, but soon to come bouncing back - and I described it as "a Mexican fast food joint that's such a brilliantly realised concept you wonder why it isn't a full-blown franchise yet." The joke being that these days, every third restaurant that opens in London is working to the same assembly line structure, inviting you to work your way along a counter and choose the ingredients for your burrito as it's assembled in front of you.

Now. How about we do that, only with pizza? That's the concept behind Project Pie, and it works magnificently. They start off by squishing a ball of dough into a base using the sexiest-looking machine you can imagine, and then you get to choose what goes on it from a selection of 30 or so toppings. (It looks like you could have all of them on a single pizza for the same standard price of £8.50, although I'd imagine after the twelfth topping or so you'd be restricted by society's unspoken rules about how tall pizzas can be.) They whack it in an oven for five minutes, and it comes out looking and tasting terrific. They even had a few scrummy American craft beers in the fridge to go with the pizza, to reduce the pain of having to leave BrewDog early.

See all those words I've just written about a totally unrelated pizza restaurant? They could have been yours, BrewDog Dundee, if you'd put a bit of thought into how to cater for vegetarians at weekends. Sort it out, please. In the meantime, if the AGM presentation is anything to go by, that list of bars we still have to visit is about to increase again...