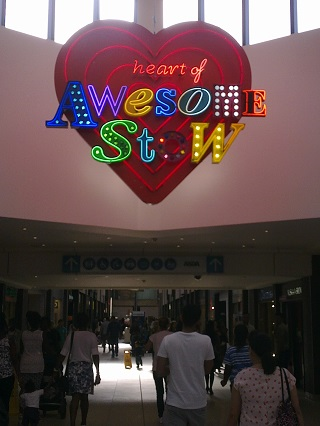 I ended up in Walthamstow by accident, really (though not the sort of accident that requires fifty people to lift a bus off you afterwards). I was looking for a new place in a hurry, as the absentee landlord of my previous houseshare had decided he'd got bored of the property game and given us all a month's notice. I'd been living in London for six months at this point, and had no real requirements for a flat other than wanting it to have better transport links than the south-of-the-river backwater where I'd been living before.

Walthamstow provided that, no question. The house and the people seemed nice enough when I first visited them, but the proximity of the Victoria Line was the thing that sealed the deal for me. I moved into the house in 1985. A few years later, the presentee landlord decided he wanted to downsize a little, so he moved all of us tenants as a group into a cosier house just around the corner. A few years after that, I took the plunge into property ownership, and chose to remain in the E17 postcode area. The flat I bought was initially intended as my first step on the property ladder: twenty-five years later, I'm finally getting around to taking the second step. 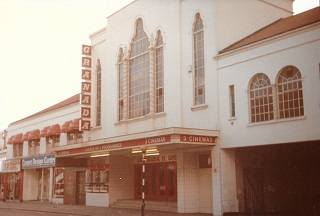 Which is odd, because for a lot of that time I had no real fondness for Walthamstow as a place: my standard line when being asked about it was "well, it's easy to get out of." Pretty much all of my work and social life was being spent in central London, with a growing network of people I'd encountered pretty much everywhere except the district where I went back at night to sleep. The numerous tube, train and bus routes in and out were what made it an ideal base for me.

During the eighties - and nineties - Walthamstow didn't really have a reputation as a destination in its own right, apart from perhaps the dog track, or as a spawning ground for boy bands like East 17 and Blazin' Squad. It's interesting to see how their music videos trade heavily on pride in Walthamstow in a way that nobody else seemed to at the time, using the Stadium's big neon sign as a backdrop to signify street authenticity. I can remember one of my young nephews watching the Blazin' Squad video at the time of its release, and him being worried that you presumably couldn't walk down the streets of E17 without bumping into all ten of them coming towards you making gangsta hand signs.

While packing up stuff in preparation for my first move in a quarter of a century, I've found some old photos from when I first moved into Walthamstow. It's interesting to see what I thought was worthy of record during my first few months in the place. Plenty of pictures of the house, sure, mainly to let the folks back in Manchester know that I was settling in nicely. Beyond that? Well, there was the Granada cinema, a former grand picture house that had been roughly triplexed in the traditional style but still had traces of its former charm. (It would be over a decade before I encountered someone at work who played old cinema organs in her spare time, and she told me that the one at the Granada was still in good working order.) There was a new shopping centre in the process of being built, and I was impressed by the graffiti art that had appeared on the hoardings in front of the site. And there was The Royal Standard, a venue that mostly put on tribute bands with occasional support from biker gang fights.

That was Walthamstow for me back then, really. A place to get out of, rather than a place to explore in its own right. I tended to shop at the bigger superstores in Tottenham, and visit the West End for movies and music. But over the years, things changed slowly. The Standard was probably the first Walthamstow location that I frequented regularly, as its image cleaned up and its music policy took in actual name bands. Wilko Johnson was a regular on the Standard's stage, and people still talk in hushed tones of the night Osibisa played there, presumably as a result of some sort of clerical error.

Gradually, even those few highlights were whittled down. The Standard spent much of its time under threat from road works and property developers: it finally closed its doors in 2011, and is still derelict. The Granada cinema changed hands to become the EMD Cinema, which was then bought out by the notorious UKCG in one of their money-making property scams and left to rot for a decade. But at the same time, something else was happening. You could say it in numerous different ways, but they'd all boil down to the same thing: a younger, trendier crowd was moving in, and they were making their presence felt.

You could argue that the closure of the cinema was the first sign of things turning around, mainly because of the way that local residents reacted to it. Over a decade, the McGuffin campaign ran fundraisers and attended council meetings in an attempt to wrestle the building from the hands of people who didn't give a damn what happened to it. In 2014, the cinema was finally released by UKCG, and it's now in the hands of a bizarre alliance between Antic Pub Collective and Soho Theatre, with a lot of uncertainty about how they propose to manage the split between entertainment and drinking. That probably won't be settled for another couple of years yet. Meanwhile, elsewhere in Walthamstow, other things have been developing. 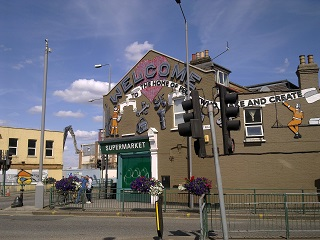 Inevitably, the love of a good woman is the reason why I'm moving out. For the last 14 years or so, The Belated Birthday Girl and I have been dividing our time between our two places, but today marks the day when we're consolidating our operations into a single house, and it's hers. So over the last week or two, we've been doing the equivalent of a lap of honour, revisiting some of our favourite Walthamstow haunts one last time.

Our plans for breakfast on this final run hit a couple of snags: delightful cafe 56 was closed for its summer holidays, while Scandi shop and caff Bygga Bo has just stopped doing hot food in order to concentrate on a fika-only service.  Not to worry, though: just down the road from there you can get a giant bowl of fruit and granola at Wynwood Art District, while over in the Village there's still Eat 17. I still have fond memories of the latter's early years, when it was a novelty waffle house: yes, you could get a Full English on a Saturday morning, but they'd serve it to you on top of a waffle. When their original chef left and took the recipe with him, it gradually evolved into a more conventional neighbourhood diner with an upmarket Spar attached, selling products from local providers as well as their own brand foodstuffs. It still gives me a thrill when you see Eat 17's Bacon Jam turn up on supermarket shelves overseas: if Blazin' Squad were making videos now, they'd probably include shots of the jars in there.

Selbourne Walk mall - the one with the temporary graffiti that impressed me so much back in 1985 - is still there for the big high street names: and Walthamstow's outdoor street market is still officially the longest in Europe. But one of the best kept shopping secrets in town is the International Supermarket, at the unfashionable end of the high street. It looks like most other gaudily-signed mini-marts from outside, but has a huge array of ridiculously cheap produce on display within. There've also been a few more specialist shops opening in recent years, with Forest Wines proving particularly welcome for its interesting range of booze options, including craft beers from the likes of the local Wild Card Brewery.

For dining out, why mess with the classics? Bengal Curry House is an Indian that does everything just right, and in our time in Walthamstow it's the closest thing we had to a restaurant where we were recognised as regulars. (We didn't have the heart to tell the manager last weekend that we probably wouldn't be back.) For a pub dinner, The Chequers has finally settled down after multiple changes of management to serve decent nosh with a fine selection of crafty beers, and the odd bit of local idiosyncracy: on our Sunday night visit, the background music was literally every Beatles album played in chronological order, albeit with the occasional discreet use of the 'track skip' button. And for a decade or so, a fancy meal out locally has always meant Trattoria La Ruga in the Village, so our final night out in town had to be there.

As I'm heading out the door, Walthamstow is continuing to evolve: though the latest Mini Holland programme of pedestrianisation and bike lanes may prove a push too far, with objections being raised by businesses in the Village area. It's also kind of ironic that the week I'm leaving is in the middle of a three-week closure of my beloved Victoria Line for track improvements. Still, I'm determined not to use the A word that's sprung up to describe the recent changes to the area [points to picture at top of page], but I do think that unlike the creepy gentrification that you see in other parts of London, Walthamstow's managed to balance the old and the new in ways that make it a fascinating place to be. I wish it well for the future, and I hope it feels the same way about me. Being a monkey, and all.