Home Archives/Categories About Me RSS Feed Mailing List Email
MOSTLY FILM: Mostly MIFfy 2015
Everybody In The House Of Love 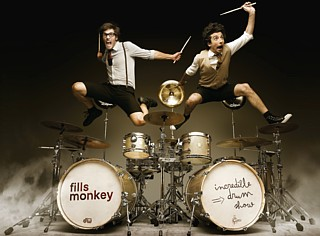 In the meantime, your Simian Substitute Site Of The Month for August 2015 is Fills Monkey. Sébastien Rambaud and Yann Coste are a pair of percussionists who've been working together for a decade or so, performing musical numbers with theatrical comedy trimmings. It sounds like the sort of thing that would go down a storm at the Edinburgh Fringe, and inevitably that's exactly where they're going to be this month, with a regular 5.30pm slot at the Pleasance. For those of you who'll be in Edinburgh, tickets are available here: for those of us who won't be around, the site has plenty of information in both English and French about who they are, what they look like and where else they'll be playing.

So, no Edinburgh for you here this month: but hopefully, we may get around to telling you about Italy instead. Wait and see. In the meantime, feel free to chat in the comments below.

Whatever did happen to the Elephant Man ? He made one good film, but then what .......?