Home Archives/Categories About Me RSS Feed Mailing List Email
Edinburgh Festival 2015: While I Was Out
Simian Substitute Site For October 2015: Monkey Films

MOSTLY FILM: A Gulf Of Misunderstanding 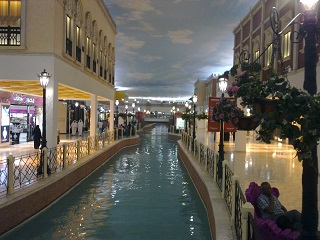 It may feel like I churn out Monoglot Movie Clubs for Europe's Best Website all the time, but the last one was a few months ago - so far, it's the only visible result of that Italy trip that it's taking me forever to write up. (On its way, honestly.) In the time since Live At Pompeii was published, one of the films I reviewed has made it over to the UK in subtitled form: Nanni Moretti's Mia Madre has just opened in selected cinemas, or can be watched online if one of those cinemas isn't near you.

Since then, I've made a few work trips to relatively mundane places - apologies to the good people of Cardiff, but you're always going to come off worse in a comparison against Florence - and one less mundane place: Doha, in Qatar. The last time I was there was in 2010, in circumstances which made it virtually impossible to see any films, apart from the bargain basement fare on the Middle Eastern Men & Motors TV channel MBC Action. This visit, I made it out to the cinema twice, and wrote about it for Mostly Film in a piece that I've chosen to call A Gulf Of Misunderstanding.

What's changed in those five years? Quite a bit, actually, which is basically the subject of this Red Button Bonus Material.

My first trip to Doha was barely touched upon on this site, barring a passing mention on the August 2010 Simian Substitute page. I made my first two journeys to the Middle East within a fortnight of each other, and Abu Dhabi effectively ruined Doha for me largely because I saw it first. Although there was another, more fundamental problem, which is noted in the piece. Making your way around Abu Dhabi is a doddle thanks to the plentiful, cheap taxis: Doha (in 2010 at least) was notorious for a cab service that was so under-resourced, bookings had to be made at least eight hours in advance.

It didn't help that my hotel for the week, the Al Muntazah Plaza, was in a fairly dull part of town with little of interest nearby, apart from the Qatar Billiards And Snooker Federation next door. I was miles away from anywhere, having to rely on a pre-arranged private driver in a giant people carrier to take me from the hotel to work and back again. It's possible that if I'd asked, the driver would have been willing to take me around other parts of the city: but I'm English, and don't like to impose. As a result, on my first visit to Doha I saw bugger all.

Things were different this year. For one thing, I was in a much better part of the city: the West Bay area, which curls around Corniche Road facing out onto the sea. As I had control of the hotel booking this time, I went for the rather spiffy Movenpick West Bay Hotel, which was within walking distance of my workplace for the week. (Nice staff, lovely rooms and surprisingly affordable for the area, but its buffet restaurant is shockingly overpriced, and its interesting-sounding Moroccan restaurant is currently closed for refurbishment.) Sure, the temperature on the streets was just over 100F, and the few people out at that time of the day must have thought I was mental as I walked a kilometre or so while carrying an umbrella as an improvised sunshade. Well, tough: I like walking round cities, even when the air feels like a car exhaust permanently blowing directly into your face, and it beat hanging around waiting for Doha's terrible taxis.

Or did it? Of course, the big thing that happened shortly after my previous visit was that Qatar picked up the rights to the 2022 World Cup. (I decided to avoid the subject in my review, but was amused to see that Mostly Film’s social media team had no such qualms.) And it definitely feels like attempts are being made to improve transportation round the city in preparation for the influx of footy fans. For one thing, there’s a free bus called the West Bay Shuttle, deliberately styled to look infinitely friendlier to tourists than the overcrowded cattle trucks that run on other routes. I never used it in the end – it didn’t really cover any part of the Bay that I wanted to get to, plus there’s some confusion about needing a travel smartcard even though it’s a free ride – but it’s an obvious step forward. Meanwhile, the taxis are definitely a lot more plentiful than they were five years ago, although they can still be unreliable in their own way. I fell victim to the well-reported scam where at the end of the journey, the driver 'discovers' that his meter’s broken and invites you to pay what you think it’s worth, i.e. haggle for a fare. Useful tip – use this taxi fare calculator before you travel to ensure you don’t start the bidding too high, like I did.

As usual on trips like these, most of your evenings end up being spent in shopping malls. The City Center Mall, just around the corner from the Movenpick, boasts of being the biggest in the country: unfortunately, this is a country which still hasn’t learned yet that biggest doesn’t always mean best. The shops are uninspiring, the multiplex is pretty generic (it’s where I saw Double Barrel), and the food options are either American franchises that never made it over to Europe (Applebees, Arby’s and the like), or global franchises that are wholly uninteresting once you get past the thrill of seeing familiar logos transliterated into Arabic. (As The BBG shrewdly observed, there’s no point in wondering what a halal version of Nando’s would be like.) I ended up going for the one unfamiliar brand, Captain Billy’s, whose description on its website as "an atmosphere that brings the pier so near" bears no relation to the Formica-tabled food court experience you'll actually get. It was a revelation to realise that my main aim when hitting overseas shopping malls is to look for bits of local culture – books, DVDs and so on – and the City Center Mall is entirely devoid of that sort of shop.

That’s one of the reasons why I took that overpriced taxi ride out to the Villaggio Mall, which I namechecked in my 2010 post but never actually visited. (Another useful tip: the roads heading towards there are insanely busy around 6pm, and you may want to start out a bit later if you don’t enjoy sitting in stationary traffic for ages.) The main focus of that 2010 article was the mall's Gympanzee childcare facility: if you don't mind, I'll pass discreetly over the appalling reason why it's not there any more. But the full-sized canal running through the length of the Villaggio - complete with gondola rides - is still as ridiculously present as ever. It’s a decent sized mall with some of the culture that City Center was missing (I particularly love how Virgin Megastores are still clinging onto life in the Middle East generally), plus the multiplex and restaurants you need for a decent night out. The cinema is just as generic as its City Center equivalent (it’s run by the same group), and presented El Khalbos to me in a perfectly acceptable fashion, apart from the twat behind me conducting a full volume phone conversation during most of it. Of the decent selection of restaurants I found there, Dunia’s fusion of Iranian and Oriental cuisine was the most interesting, though if I’d realised that Indian megarestaurant Asha’s had a branch there I’d have gone there instead. (Just opened in Manchester!)

On the whole, my second experience of Doha was much more enjoyable than my first. The city seems to be putting a lot more effort into making visitors welcome, although there’s still a way to go before 2022: the airport, for example, has been renovated to within an inch of its life and looks spectacular, but it takes you an hour and a half to get through security on a Thursday night, and that really isn’t on. Still, at least they didn’t take my passport off me and make me work as slave labour on a World Cup stadium for the next six years, so there’s that.