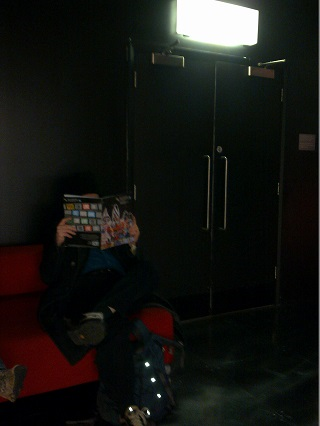 This picture is a symbol of my shame right now.

It's a little under-exposed (despite The Belated Birthday Girl's best efforts), so let me explain what you're looking at. This is me on October 30th 2010, sitting outside the Studio cinema at BFI Southbank, reading a copy of the 2010 London Film Festival programme.

In fact, it's the fourth in a series of similar photos. Earlier that year, The BBG had taken the first three, which were as follows:

Did you ever have one of those days when you woke up and suddenly remembered that there was a book that you were supposed to have written by now, that you technically hadn't even started yet?

I had one of those days last week. 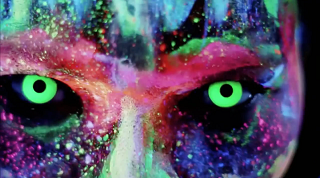 Books: I can't remember which comedian it was who said it, but it was something along the lines of how happy they were when famous film stars died, because then we'd get to see all their best films on telly again. We had a similar thing on a smaller scale recently, when the death of writer David Nobbs triggered what looked like a BBC2 repeat of his masterwork, The Fall And Rise Of Reginald Perrin. Except it wasn't: they just showed the first episode and nothing else. Luckily for me, I've had Nobbs' trilogy of Perrin novels on my bookshelves for a couple of decades now, so I took this as a cue to re-read them. I have fond childhood memories of enjoying the TV show, even though my parents seemed less keen on Leonard Rossiter in it than in Rising Damp. And now that I'm approximately the same age as Reggie (as they were at the time), I can see why they were perturbed by it: because under the zany surface is a bleak, bleak tale of a middle-aged man literally losing the will to live. The sitcom played up that surface for laughs, while the books - especially the first one - are a much darker proposition, with a couple of suicidey and incesty subplots that presumably had to be removed before it could play on primetime. But Nobbs' mixture of the dark and the light is perfectly balanced throughout, with those oh-so-familiar catchphrases jollying you along through three separate tales that all climax in the same way: Perrin finds his life in a rut, and chooses to get out of it by pressing the self-destruct button. The storylines in both media may follow the same beats, but if you only know Reggie Perrin from the TV, the novels just might surprise you.

Internet: Here's a quick update on our Adventures In Crowdfunding for 2015. The Belated Birthday Girl and I both contributed to the re-building of Edinburgh burrito palace Illegal Jack's, now happily open again one year after an incident involving an upstairs tenant who didn't understand how taps worked. I've also paid some money towards a Blu-ray featuring the wonderful works of animator Don Hertzfeldt, and hopefully should be seeing that some time early in 2016. Meanwhile, The Belated Birthday Girl has also got involved in film financing in a small way - and if you know her at all, the details of the work she's donated to should come as no surprise whatsoever. Con Man is a 13-part crowdfunded web series created by and starring Alan Tudyk, who's best known as the pilot of the spaceship in Joss Whedon's TV show Firefly (and subsequent movie Serenity), captained by the handsome and subsequently much more famous Nathan Fillion. So in this show, Tudyk plays an actor best known as the pilot of the spaceship in the TV show Spectrum, captained by the handsome and subsequently much more famous Nathan Fillion. The series follows Tudyk on the sci-fi convention trail, interacting with the geeks while trying to get his floundering career back on track. Inevitably, there are in-jokes and cameos by the ton, but Tudyk is careful to make sure that even the non-nerd viewer will find enough to amuse them: at heart, it's a workplace comedy driven by one man's jealousy towards his more successful colleague. The first few episodes are now available via Vimeo On Demand, with the rest to follow in subsequent weeks - ten British pounds will give you streaming access to them for the next three months. Based on what I've seen so far, it's well worth a punt.

Music: When I reviewed The Hitch-Hiker's Guide To The Galaxy here a decade or so ago, I briefly touched on the concept of a radio show being an event, and how that never seemed to happen any more. Well, I think it happened again last Saturday - on Radio 3, no less - when there was a live broadcast of the world premiere performance of Max Richter's new composition Sleep. It was eight hours long (resulting in the breaking of two world records that night), and was performed between midnight and 8am. If you think that's just going to make people nod off during it, that's kind of the point - Richter intends it as "a lullaby for a frenetic world." Always up for a challenge, The BBG and I went to bed just before midnight on Saturday and left the radio on all night. If it's Richter's aim to have audiences asleep for the bulk of those eight hours, it didn't quite work with us: for the most part, we drifted in and out of consciousness throughout the duration of the piece. (When we compared notes afterwards, it turns out that both of us had dreams about listening to it.) I was awake long enough to appreciate the structure: two main themes (one chordal, one melodic), linked by a series of droney soundscapes, and repeating with variations in 1-2 hour cycles. It's quite an extraordinary experience, and one you can recreate at home for the next few weeks thanks to the whole thing being on the iPlayer. For the less ambitious of you, there's a cut-down single album edit of the piece called From Sleep, which gives you a flavour of the musical textures of the whole. You can catch a bit of that on this month's Spotify playlist, along with some other tunes that have taken my fancy recently.