Canterbury, I Am Out Of You, as I believe the young people say nowadays. This was always going to be one of the hairier bits of scheduling of this festival: finishing up work in Canterbury late on a Friday afternoon, and rushing down to London on a train in time for a 6.30 screening. In the end, Southeastern did the job just fine: but I needed to have a backup plan in the bag, just in case they didn't. My plan was this: as I already had three of the four shorts in this opening programme on DVD, I'd bring them along with me, and watch them on my laptop if I got to BFI Southbank after the start of the screening. Perhaps I could grab a spot next to the green room, and have Christopher Nolan stumble over me as I watched, and I could say to him “hey, you should look at this, Chris, the picture quality's really good,” and watch his little Tim Nice-But-Dim face crumple up in sadness.

Well, I didn't need to do that in the end. And it would have been rude to do it anyway, as Nolan's very public attempts to keep 35mm film as a viable image format should certainly be cheered on, at least to a degree. He's one of the few major Hollywood directors who still insists on shooting on film rather than digital: and when you consider how audiences been forced to accept over the last decade that low-light scenes are automatically going to look like shit, then I'm completely on his side. Plus, film as an archive medium is always going to win out over digital any day – during my recent house move, I threw out enough unreadable tapes and disks to appreciate the benefits of analog storage. But I don't hold with the fetishism for film exhibition that seems to be popular at the moment – if you've got a newly-struck film print, watching it is a glorious thing, but I'd rather have a good digital copy than a battered 35mm print any day. (Still, I have to admit that this week's announcement by the Prince Charles cinema that they're arranging Christmas screenings of Die Hard in 70mm has got me ludicrously excited.)

Anyway, this event exists because Nolan is a big fan of animation duo The Brothers Quay, and wanted to get a few of their shorts out in a touring programme in new 35mm prints. And to be fair, he makes a good case for film projection in this instance. His introduction is a lot funnier than his films would have you believe, and in it he points out that the hand-made nature of the Quays' films makes them a perfect match for analogue media. The Quays themselves – whose delightfully unco-ordinated awkwardness is exactly what their films would have you believe – agree with him, though it takes a lot of prodding on Nolan's part to get them to even start talking. The one new film in this collection – Nolan's own short documentary Quay, showing them creating in their studio – captures them in a much more relaxed and open mood, suggesting that work is everything for them. The documentary drops fascinating hints about their process without totally demystifying it, showing the lengths they go through to bring life to what's generally a big old pile of junk on a table top.

We get three of the Quays own films here, presented in reverse chronological order, which makes for some fascinating contrasts. 2000's In Absentia is the most abstract of the trio, and the hardest to get a handle on - it pushes their obsessive attention to detail to the max, so that a close-up of pencil lead snapping becomes a huge shock moment. A Stockhausen score played at stadium rock levels helps cover up the lack of cohesion in the visuals. It's probably no coincidence that the better films in the set, 1990's The Comb and 1986's The Street Of Crocodiles, both have literary texts as their starting point. It's only a starting point – Stephen and Timothy have no interest whatsoever in telling you a mere story – but in each case it gives a solid framework within which they can concoct their rich sequences of dreamlike images and visual rhymes, enhanced by Leszek Jankowski's music.

The Comb is my favourite of the three Quay shorts shown here, partly because it's the one that's most explicit about its use of dream logic, partly because it's the one I've seen the most times – these are films that definitely pay off on multiple re-viewings. In fact, I'm pretty sure the first time I saw The Comb was in an LFF animation programme, of the sort that they don't seem to want to put on any more. And it's interesting to see that like their acknowledged hero Jan Svankmajer, over time the Quays' focus has moved away from pure animation and into the pure creation of images. It's gratifying that a big name like Nolan is using his influence to get their work out to people who wouldn't normally know about it. In fact, he's such a big name that at the end of his intro, he gets to exit through the secret Door 2 at NFT1, leaving the building in a wholly unexpected direction, like a truck leaving a bridge in a Dark Knight chase scene. 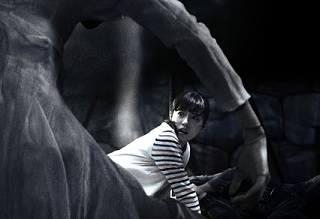 Japanese horror movies as we know them today effectively started with Ring. Sure, before that there were filmmakers like Kiyoshi Kurosawa who were finding new ways to unsettle audiences, but Hideo Nakata's 1999 hit gave the genre a huge global boost. His follow up movie, Dark Water, was more or less okay, but people gave it the benefit of the doubt because hey, this guy made Ring. Unfortunately, Nakata's post-1999 career has all been like this – a succession of okayish attempts at rebottling that lightning, including the Hollywood version of the Ring sequel. Maybe, as The BBG has suggested, it was just a fluke, or maybe Koji Suzuki's story was more important than who told it. Ring's appeal came from a simple concept that translated into a heart-stopping climactic image - all Nakata's subsequent films have put far too much effort into generating scares.

Ghost Theater is another example of that, a remake of one of Nakata's pre-Ring horror flicks. Struggling actress Sara (Haruka Shimazaki) is getting fed up with playing corpses in TV dramas, and accepts a role in a new theatre play. Although it's never mentioned by name, it's obviously an adaptation of the story of Bathory, the Hungarian countess who murdered young girls and drank their blood to keep her own youth. It's a creepy enough scenario already, before you factor in the seething jealousy bubbling up between the female cast members, a dangerously tactile director, and – the real reason why we're here – the theatrical prop which turns out to have an oh-so-predictable life of its own.

It's utter bollocks, sure. But unlike most recent bollocks horror movies, it's not offensive bollocks, so at least that's something. Nevertheless, these are very much 12 certificate scares, with very little gore, and not even that many of the sort of jumps we associate with J-horror. It doesn't help that the monster isn't a particularly scary one, and all too often we're left watching victims standing still in terror as they watch certain death slowly waddle towards them. There's far too much that's predictable about the whole enterprise, with hugely telegraphed setups placed way ahead of their payoffs. “I'm just going to sharpen the metal spikes on this bit of scenery that doesn't need to be particularly sharp. No reason.” There's nothing here to particularly surprise you, and that's something you definitely couldn't have said about Ring.

Land Of Mine [trailer]

The Belated Birthday Girl - In the opening scene of Land of Mine, we see a column of defeated German soldiers, being marched out of Denmark at the end of World War II. Sergeant Carl Leopold Rasmussen spots that one of them is carrying a Danish flag with him, and so he stops the German soldier, takes the flag off him, and violently beats him – “It’s not your flag!” – leaving us under no illusions about Carl’s feelings towards the erstwhile occupiers of his land. We next see Carl setting out black flags as markers along a beach: his assignment is to clear thousands of buried German land-mines from this beach. And his workforce are to be German PoWs. The only problem is, the troops he is assigned are young and inexperienced, barely more than children. We’ve seen them being trained for the work by severe Danish Lieutenant Ebbe, and only one blew himself up in the training, so obviously they’ll be up to the task.

Land of Mine tells an unfamiliar – to me, at least – story from WWII, which deserves to be better known: German PoWs, many of them very young, used by the allies to clean up the mess of land-mines planted in the war, with fatal consequences a high proportion of the time. The choice of having basically child PoWs in the film, though reflecting a part of the truth of what happened, leads the audience’s sympathies firmly in one direction, and at times the film feels almost like a dour Battle Royale, as we wait to see which of the German boys will be next to get killed by an exploding mine, and which ones will survive to the end.

The decision to base it around child soldiers also leads the film occasionally into sentimentality, while Ebbe’s strict Lieutenant is as cartoon a villain as any Nazi officer in a more traditional war film. Which is, presumably, kind-of the point: to humanize the German prisoners who were forced to clear the mines. But by making them children, the film avoids difficult moral questions and nuanced responses. Carl’s journey from hate-fuelled task-master to sympathetic protagonist is also made a little too easy by that decision. However, as it does reflect a real situation, it is perhaps justified, and even while Land of Mine sometimes feels like a dark cousin to a boys’ adventure film, it is a story worth the telling, and overall is effectively told.

Christmas screenings of DIE HARD in 70mm at the Prince Charles - gawd I miss London. Also missing the LFF, but enjoying your write ups; especially having just come in from the vastly overated NASA promo 'The Martian'