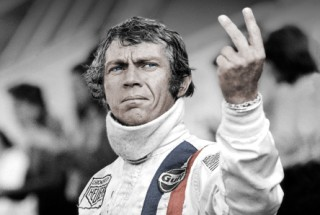 I miss the matinee vouchers. For newcomers to the LFF, here's how it used to work: tickets for afternoon screenings were the same price as the ones for evening screenings, but there was a voucher scheme in place to help you save a few quid. You could buy five or ten vouchers at a substantial discount on the normal entry price, and use them to claim a ticket for any pre-5pm screening in the hour or so before it started. It made for some interesting impulsive film choices on the day. Nowadays, all matinee tickets are sold at the same discounted price. There's no incentive to wait until the day to pick your films, which means that everyone buys their matinee tickets as soon as they become available, which means you have to buy them in advance to avoid the increased risk of sellouts. I'm just saying it would have been nice to have stumbled across this film as a last-minute booking, rather than having to commit to it back in September.

Either way, one of the pleasures of this screening is the traditional late-festival appearance of Adrian Wootton: former boss of the LFF, now its programmer for Italian Cinema and Films About Stuff That Guys Like. This one falls firmly into the latter category, and you can tell he's delighted to be introducing it: though possibly less delighted with the awkward five-minute gap following the screening, when he was expecting producer John McKenna to be joining him on stage, but nobody could find him. (McKenna eventually bounds onto the stage with profuse apologies, saying he'd been in the cafe the whole time waiting for someone to tell him he was wanted. Luckily, the ensuing Q&A was worth the wait.)

Co-directed by McKenna and Gabriel Clarke, this documentary captures Steve McQueen in 1970, when he was the hottest male star on the planet and capable of doing anything he wanted. What he wanted to do was set up his own production company and make a film about motor racing, one of the biggest passions in his life. So he assembled a team headed up by director John Sturges to make Le Mans, a dramatic movie set at the 24 hour race. He brought in some of the best endurance drivers in the business, and organised a marathon schedule that would start with them filming the race itself, and then spending several weeks doing their own shoot on the track for the sequences that would actually tell their story.

Unfortunately, they started shooting without having really worked out what that story was, and this is ultimately why Le Mans isn't the legendary picture that McQueen and his backers hoped it would be. The absence of a script resulted in schedule overruns, out-of-control budgets, massive personality clashes, and actual physical injuries. One of the producers warned that without a locked-down script, they were effectively making “the most expensive documentary in the world”- which is ironic, because that documentary could well have been more successful than the limp drama picture they ended up with.

McKenna and Clarke have plenty of material to work with: interviews with all the participants still living, rare audio interviews McQueen did with students when he wouldn't talk to press, and preciously unseen footage from the Le Mans shoot that was only recently discovered as part of their research. It's all briskly edited together, with some smart cross-cutting between sequences of the sort that you don't normally get in documentaries, leaving the viewer to draw some of their own conclusions about what went wrong. If there's a flaw, it's that the final sequences of the documentary feel a bit rushed – a little more detail on the release and aftermath of Le Mans would make for a better balance. Still, it's a fascinating story of over-ambition in moviemaking, and as much as festival audiences may claim to love film, they love stories of failures in film even more. 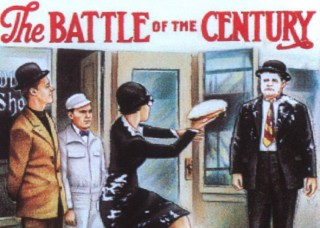 We get a delightfully enthusiastic introduction here from Vic Pratt, the LFF's programmer for Weird Shit From The Archives. He's obviously of a similar age to me, as he tells the story of how he grew up watching Laurel and Hardy on TV, notably in the crudely edited Robert Youngson compilations of silent shorts. (I wonder how he feels about the cartoons?) It turns out that most people's experience of the film at the heart of this particular programme of shorts, The Battle Of The Century, is a false memory generated by Youngson and his over-enthusiastic scissors. You may think you've seen a Laurel and Hardy film with a gigantic custard pie fight at its climax: in fact, what you've actually seen is a three-minute edit of the best parts of a twenty-minute short (effectively the second half of the clip linked to above). It wasn't until recently that most of the missing chunks of the pie fight were rediscovered, allowing this almost completely restored version to be made.

The Battle Of The Century is an important piece of film history, if only for the statistic that three thousand custard pies were used in its making. But it was filmed in 1927, and the rest of the programme is extraordinary for showing how Laurel and Hardy's comedic style developed between then and 1929, when they were just about to move into the sound era. Aside from the geometric precision and scale of the pie fight in Battle, it's structurally very similar to some of the shorts that followed it, like the ones we get here - You're Darn Tootin' (from 1928) and Double Whoopee (from 1929). There's a definite formula being followed: the duo are placed in a particular situation (playing in a band or working in a hotel), they get into scrapes, they cause a big fight that drags in several dozen bystanders, and make their escape. The timing and density of the gags increases year by year, but these are still recognisably clusters of two or three comedy sketches cobbled together to make a twenty minute film.

Which is why for me, the revelation in this collection is 1929's Big Business, which has a single storyline for its entire length. Stan and Ollie are on the road selling Christmas trees door to door, and not getting very far. One potential customer – the oh-so-familiar James Finlayson - takes particular umbrage at their salesmanship. The resulting war between the three of them escalates spectacularly from that point on: and the results are even more hilarious than the pie fight, because there's a definite raising of the stakes at each turn, rather than a simple increase in the number of people involved. Every time you think they've gone as far as they can possibly go, they take it one stage further. In a crowded cinema, this buildup results in the most delightful mass hysteria you can imagine. You won't be able to recreate that at home – and you'll be missing out on the splendidly inventive musical accompaniment we got from Stephen Horne – but take twenty minutes out of your day right now to watch this. If you don't enjoy it, you don't enjoy cinema, and that's all there is to it. 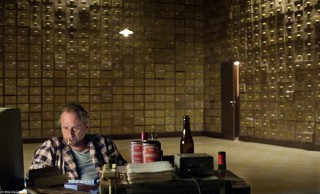 Over in the Odeon Leicester Square, the people who were lucky with Surprise Film tickets are being treated to a screening of Charlie Kaufman's Anomalisa. The rest of us are in the slightly grubbier Cineworld Haymarket, watching a film being introduced by Jonathan Romney, the LFF's programmer for Patchy European Cinema. A couple of years ago, a Romney selection in the programme was treated in some quarters as a potential warning sign, but the new one from Jaco Van Dormael turns out to be a reasonably safe bet.

The poster tagline for The Brand New Testament tells you everything you need to know: 'God exists. He lives in Brussels.' It also helps to be aware that he's played by Benoît Poelvoorde, Belgian cinema's leading misanthrope ever since he was whacking people for comedy purposes in Man Bites Dog back in 1992. God lives in a Brussels tower block, spending all day in his room with his computer mucking up human lives, and refusing to let his wife (Yolande Moreau) and daughter Ea (Pili Groyne) out of the house. Taking a leaf from her brother's book, Ea decides to stir things up a bit - first by texting everyone in the world to tell them exactly when they're going to die, then escaping from home to gather her own apostles and create a new testament.

This may seem like a potentially blasphemous premise on paper, but Van Dormael handles it more like the sort of Eurowhimsy we've traditionally associated with the likes of Jean-Pierre Jeunet. Still, it's a while since we've had one of those, so it's easy enough to ignore some of the flaws arising from that approach. The central idea of humanity knowing their own death dates is as transgressive and fertile as the everyone's-back-from-the-dead concept that powers currently trendy TV show The Returned (as well as the original film that spawned it): it makes you think about life and death in unexpected ways. The six apostles gathered by Ea turn out to be crucial to this aspect of the story, as each of them has reacted to the news of their upcoming death in a very different way – either choosing to engage more fully with the outside world, or using it as an excuse to retreat from it. Ea uses their reactions as a way to start planning an alternative way in which the world could work.

It's the comedy aspect of all this that's a little harder to get a firm grasp on. It's a mixture of CG-enhanced Amelie-style wish fulfilment, combined with the dark farce of the continuing mishaps that befall God, who's effectively the baddie of the story. The two styles don't always combine as well as they should, but overall the film's an engaging blend of high ideas and low comedy. You'd certainly have to be a bit twatty to find it offensive in any way: nevertheless, it'll be interesting to see how American audiences react to it.