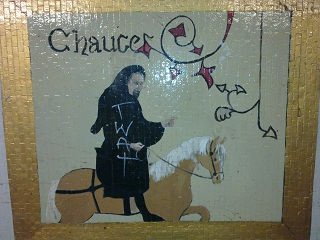 In case anybody cares, I'm in Canterbury this week. Most evenings, I've had to walk through a slightly shonky underpass that separates my hotel from the bright lights and interesting restaurants of the town centre. At some point, a decision was made by someone to liven the underpass up a bit with murals of local dignitaries. It hasn't worked.

Canterbury is not, of course, London, which greatly reduces my ability to participate in this first full day of the LFF. So, three cheers for The Belated Birthday Girl! Having spent the morning of October 8th dealing with some building work on what I guess we should start calling Château Belated-Monkey, she then headed into town and attended four LFF events back-to-back, all of which she's reviewed below. Huge thanks to her for that.

Normal service, or what passes for it around here, should hopefully be resumed tomorrow. In the meantime, here are your first reviews of 2015. Enjoy. 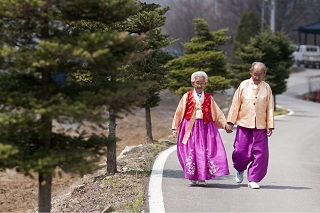 The Belated Birthday Girl - When Kang Kye Yeol was just 14, Jo Byeong Man, then 19, came to her parents’ house to marry her, and work for her parents. After 76 years of marriage, and a lifetime of experiences, they live in their small mountain home, acutely aware that they are in the final chapter of their lives. We see them eating and playing together, visited by their children and grandchildren, taking part in a seniors’ day-trip with the local community centre, playing with their dogs, and walking, gathering wood or flowers in the mountains. While some of the conversations feel unnaturally expository, and some of the scenes just too good as film-scenes to be completely spontaneous, and while other scenes feel intrusive on moments which should be private, there’s no denying the emotional force of this film.

The changing seasons in the mountains, not to mention the parade of colourful, matching, traditional outfits worn by the couple over the course of the film, make it also a visual treat, with a particularly striking winter scene book-ending the film most affectingly. Through Kang’s voice-over narration, she gives us a real sense of her deep love for Jo, forged over their many years together, and ultimately it is this which makes the film, in spite of its flaws, so moving. 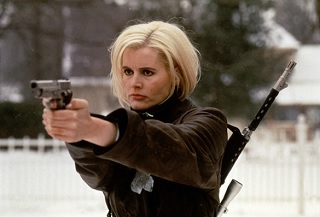 The Belated Birthday Girl - Ever since she made Thelma and Louise and saw the reaction to it, Geena Davis was very aware of how few opportunities there were for women to play interesting roles. But it was after she became a mother to a daughter, and started watching family films with her, that she realised just how much gender imbalance there was in what children even now in the 21st Century are seeing, and that led to her setting up the Geena Davis Institute on Gender in Media. But before we got to hear about that, host Hannah McGill took Geena Davis through her life and career in film and television, accompanied by a selection of clips from her work.

At the age of 3, Geena apparently announced to her parents that she would be in the movies, although up until the age of 17 she only ever saw Disney movies and has no idea how at that age she would ever understand that was a job you could do. Although she didn’t act as a child, she knew she wanted to study acting at college, and so on the advice of a music teacher, went to Boston to do that. After, she went to New York, and not knowing how to get into movies (she didn’t realise she should be in LA for that) but knowing that sometimes models do get into movies, she took up modelling.

That led to her first film role, in Tootsie (they wanted someone for a swimsuit scene, so were looking for a model who could act). She then had a tiny part in Fletch – she’d auditioned for the main part, but she didn’t “look the way they wanted” – which showed she could be funny. Her first lead role was in The Fly, and that led to Beetlejuice. Asked by McGill whether working in those not-quite mainstream films with interesting directors was a conscious choice, Davis said that it was easier to see in hindsight what she’d been looking for, but she’d wanted to play characters in charge of their own fate: “Girlfriend of…” just wasn’t interesting.

She’d lobbied to get a role in Thelma and Louise, which famously went through several changes in cast and director. When Ridley Scott decided to direct it himself, her persistence paid off with an audition. She’d gone in with a prepared pitch to play Louise, and after giving this whole speech, when Scott said “So you wouldn’t want to play Thelma…?”, she changed tack and “made shit up” about how, thinking about it, really she should be Thelma. When they were making the film, no-one had any idea of the nerve it would strike. When the film came out, the press was that “now the world was going to change” for women’s roles in movies – but, of course, it didn’t.

Moving onto her television career, she said she’d had some great roles on TV shows, but not many lasted very long. Although she’d never wanted to do hour-long TV series, which were “like making a movie that never ends”, when asked to play the first female US president in Commander in Chief, she asked “Do I have to read the script first, or can I just say ‘Yes’?” In the end, she loved doing the show, and wished she’d had a second term! A speech given by Donald Sutherland’s character in a Commander in Chief clip – which, by the way, really made me want to see the show – gave Hannah McGill her segue into discussing the Geena Davis Institute.

Davis said how she’d never meant to found an institute, but once she’d realised the gender imbalance in children’s media, she found no-one else seemed to have noticed, and everyone she mentioned it to said “No, that’s not a problem any more – that’s been fixed!”. In reality, what you’d find is there would be one important female character in a movie, and that was supposed to show that gender imbalance had been fixed. But no-one had the data, so she did the research. She didn’t do it to educate the public: the idea is to work with creators, in a private way, and it’s being effective. Because the institute is about children, Davis says she hasn’t had that much negative reaction. The immediate reaction is always “We want to do better”, and what she’s talking about is do-able and makes sense.

The best question from the audience Q&A came from a campaigner from the 50:50 Parliament campaign, who asked how long Geena Davis thought it would take to get to gender balance in the media. Davis’ answer was that she’s done the math from the data she’s collected, and if we progress at the same rate, it will only take 700 years. But she’s confident we’ll be able to take both zeros off that, as it’s something that can happen instantly. 90% of creators say gender balance is important and achievable. The event was a very entertaining and illuminating interview, and I for one applaud her efforts, admire her optimism, and hope that in 7 years she’ll be back to say she was right and that it really is fixed. 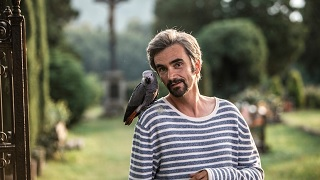 The Belated Birthday Girl - One of the pleasures of the LFF comes from seeing a large number of films and sometimes choosing them from a brief reading of a program note, so that by the time you see the film, you’ve forgotten what it is and why you picked it. This means you can get some pleasant surprises on occasion. Lost in Munich is one of those for me. The director, producer and one of the actors were there to introduce the screening – which was the world premiere, in fact. Their brief introduction was very entertaining, which boded well for the film, and the only thing they would say about Lost In Munich itself was that it wasn’t a simple film.

As I’d managed to forget almost everything I’d read about it, I was able to enjoy it in almost total ignorance, just enjoying it as it unfolds, and I think that is very much the way to see it if you can. So, apart from telling you that it is a very funny, often clever, sometimes thought-provoking, and frequently surprising film, I’m not going to tell you any more about it. If you’ve not already read or heard anything about this film, try not to. And if you have, try to forget it all. And then, do go to see this film, if you get any chance at all. 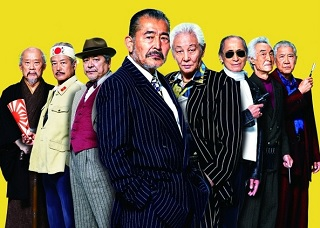 The Belated Birthday Girl - Ryuzo is an ageing ex-yakuza, embarrassing his salaryman son and his family by shamelessly showing his tattoos in public and refusing to get prosthetic fingers to replace those he chopped off in apology in his glory days. When the son’s family go away for a holiday, and leave Ryuzo in charge of the house, he first falls prey to a telephone scam common in Japan (known as “ore ore sagi”), and then meets up with a couple of his pals from the old days, on the way crossing paths with the same modern criminal gang – crucially not yakuza – who, unbeknownst to him, tried to scam him earlier. When they seem to keep running across the same gang, they decide it’s time to get the old team back together and form a new Yakuza family, and the stage is set for a very silly, and pretty funny, farce.

Those who associate Kitano with deadpan humour, static tableau shots and stylised high violence will be surprised by this very fluid and almost family-friendly comedy. The film makes many references to the current situation in Japan, with common scams on older people featuring prominently, as well as references to legal changes to combat organised crime. To fully appreciate many of the gags and references it helps to be familiar with modern Japanese society, but the slap-stick comedy and black humour will play pretty universally. If it commits the sin of romanticising old-school criminals, and harking back to a mythical time when criminals lived by codes “not like criminals today”, then that’s a common sin in British and US gangster films, too. The central cast of veteran Japanese actors give fine performances, and Kitano himself cameos in a few scenes as a detective who knew them from the old days, when he was a rookie. While probably not entering the list of Kitano classics, Ryuzo and his Seven Henchmen is probably his most fun film for a while, and although not every gag hits the mark, it is definitely worth seeing.