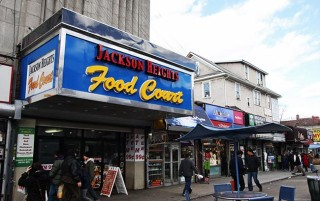 This is Frederick Wiseman's fortieth documentary: and it's my first Frederick Wiseman. He's one of those directors whose work is made for film festival audiences – detailed studies of a closed environment, typically with an epic running time attached. He's a regular presence at the LFF, and Lesley has previously raved about films like Boxing Gym in these very pages. But I've never quite got around to catching one of his films before now. Still, the subject matter seemed interesting, and this one's a measly 190 minutes long, which is a doddle after Happy Hour last weekend.

Jackson Heights is a district in Queens, New York. What's so special about it? The organiser of the local Gay Pride march explains why early in the film: it's one of the most ridiculously diverse communities in America, with immigrants from dozens of countries, and – allegedly – 167 different languages to be heard on the streets. Wiseman's camera wanders from street to street, calling into various buildings to present scenes from a few weeks in the run-up to Independence Day 2014.

There are several themes that re-occur throughout the film. We see that it's a community with a wide spectrum of sexual diversity, and it's a large part of the area's identity – that annual Pride march turns out to be a direct response to a homophobic killing that took place in 1990. With all these new arrivals coming in from around the world, we spend quite a bit of time in the Make The Road centre which prepares them for integration into American society. And those multiple nationalities make the sports bars rather lively as the 2014 World Cup plays out. The closest thing resembling an ongoing story in the film is the creeping suspicion that Jackson Heights is the next area in New York State due for gentrification: one highlight is a community worker's magnificently lucid description of the process by which small businesses are being driven out of a local mall.

Wiseman is, I believe, famous for his hands-off approach in depicting events on screen – no captions, no narration, no off-camera prompting, he lets his subjects speak for themselves. And my one frustration with that approach in this particular instance is that it doesn't allow for any description of what happens outside of what we see in the film. Did the mall businesses manage to stop Home Depot from throwing them out? Yes, I know the internet exists, but an initial search isn't helping. Maybe post-film discussion might start breaking out on the film's Facebook page after its US release in November – here's hoping.

But the benefits of Wiseman's technique massively outweigh my objections, which appear to boil down to this: 190 minutes wasn't long enough to cover everything I wanted to learn about Jackson Heights. He presents a wide range of its fascinating and, more importantly, articulate inhabitants – when you're relying on your documentary subjects to tell their story without your visible interference, you need to make sure they've got the skills to do that, and everyone here appears to be a born storyteller. The teacher at a school for new immigrant taxi drivers is my absolute favourite of the people we meet: his mnemonic for how to remember the points of the compass will stick with you forever.

In their conversations with each other, Wiseman's subjects describe the problems they encounter in their daily lives, and how by and large they're working together to fix them. Some of those problems are going to be trickier to fix than others – as in many parts of the US, police harassment appears to be one of the biggest. But the focus is less on the problems, and more on the action that's being taken by the community. Wiseman, ultimately, is showing us something that's massively important to see right now: this is what America looks like when it works. People need to be reminded of that sometimes. 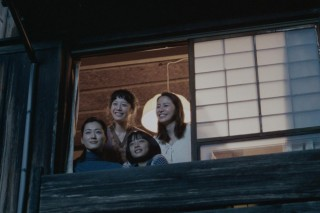 Based on that screening of In Jackson Heights, I've got a lot of old Frederick Wiseman films to catch up on after his festival. That's certainly not the case with Hirokazu Kore-eda, another LFF regular, but one whose back catalogue is massively familiar to me. The last time he came here was two years ago, when he presented his film Like Father, Like Son and gave a Screen Talk. One of the things he let slip in that – which for some reason I didn't document at the time – was that his next film would be an adaptation from a manga. This sounded like a disturbing development: Kore-eda is one of the few directors in Japan who still creates his own stories, and it seemed like a step backwards for him to be reworking other people's material like everyone else. Inevitably, we shouldn't have worried about it.

At the start of Our Little Sister (based on Akimi Yoshida's comic Umimachi Diary, aka Seaside Town Diary), we meet three adult sisters sharing the same house. With their parents estranged following their father's infidelity, eldest sister Sachi (Haruka Ayase) has pretty much raised Yoshino (Masami Nagasawa) and Chika (Kaho) on her own. When news comes through that their father has died, it's not a particularly big deal for them. But at the funeral, they meet Suzu (Suzu Hirose), his teenage daughter from his second marriage. The three women are impressed by Suzu's maturity and, taking pity on her situation, invite their newly-discovered little sister to come and live with them. After a short period of readjustment, the four become very close. That doesn't get around the fact that the household now contains a living reminder of how their father broke up his family, and at some point that'll have to be addressed.

You'd assume that the original manga made a tear-jerking melodrama out of this story, and that most other directors (certainly most other Japanese directors) would do the same. But Kore-eda has been in world-class form for several years now, and has a solid reputation for not over-sentimentalising stories with a core of sadness to them. Nevertheless, there's the occasional wobble in this film, largely down to Yôko Kanno's musical score, which is... well, my colleagues at Mostly Film currently burst into fits of rage on the frequent occasions when The Guardian's Peter Bradshaw uses the word 'sucrose' as an adjective, so let's steer clear of that. But Kanno's music does a lot of heavy emotional signposting which the film simply doesn't need.

As a result, Our Little Sister isn't quite up to the same heights as Kore-eda's absolute classics. But it's still a Kore-eda movie, which puts it way above most things you're likely to see. As ever, it's a film bursting with warmth and humanity: it has a fondly inclusive attitude to all its characters, some delightfully subtle storytelling (again, if you ignore the music), and splendid performances from everyone concerned. Suzu Hirose is especially impressive: although this isn't a traditional coming-of-age story, she manages to effectively grow up on camera, which is always lovely when it happens.