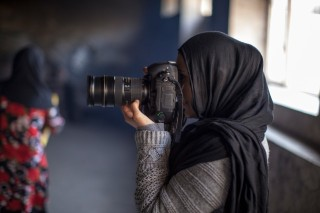 “If a country doesn't have photographs, it doesn't have an identity.” For a large portion of the 1990s, Afghanistan didn't have photographs, because the Taliban had outlawed photography. Once they'd been pushed out, and the country commenced its return to some sort of normality, a new generation of local photojournalists began to spring up: people who wanted to document and publicise the rapid changes that were taking place in their society. This documentary by Alexandria Bombach and Mo Scarpelli introduces us to four of these photographers.

Najibullah Musafer is a veteran photojournalist, and responsible for that quote at the start of this review: he's an active part of the process by which the skills of his trade are being passed to a new generation. Wakil Kohsar is an up and coming photographer documenting the grittier aspects of current Afghan life, from crack smoking in the streets to people voting for the first time. And then we have the power couple of Afghan photojournalism, Farzana Wahidy and her husband Massoud Hossaini. She's one of the very few women working in this field, and is able to document female issues in a way that no other major photographer can: he's got a Pulitzer Prize under his belt, but it's for a photo of a scene he really wishes he hadn't been at.

Bombach and Scarpelli's debut feature opens your eyes not just to the skill of these photojournalists, but also to the unfamiliar aspects of Afghan life that they're documenting, both good and bad. Inevitably, the country brings its own unique challenges to the job. One of the most uncomfortable sequences comes when Wahidy travels to the city of Herat, a city notorious for having one of the highest rates of self-immolation. Are these women actually setting themselves on fire, or are they being attacked by their husbands? Wahidy tries to investigate, and comes up against an implacable brick wall in the form of a doctor who's either covering up the figures deliberately, or scared for his life, or a bit of both. It's only afterwards you realise: if he's made that nervous by an Afghan woman asking awkward questions, how must he feel about the two Western women following her around with a movie camera?

As the directors point out in their Q&A, the film doesn't really have a feelgood structure: it starts off by focussing on the journalists' work in documenting the positive aspects of change in Afghanistan, and gradually reveals that not only is there a long way still to go, but in some aspects things are going backwards. Certainly the number of violent attacks on journalists in the country is increasing, as is revealed in a bleak series of closing captions. With that in mind, the work of these people needs to be promoted and celebrated, and Frame By Frame acts as a worthy tribute. 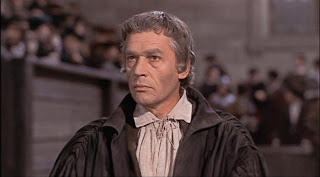 Another day, another LFF Archive restoration – in fact, it looks like we're going to be seeing an old film every day from now up to the end of the festival. A Man For All Seasons is a slightly odd one for me to be revisiting: not because of the film, but because of the original stage version, which I had to study for English Literature O Level. I have precisely two memories of the play from that time. The first is the scene (not in the film) where Sir Thomas More, exasperated with his actions being interpreted as “a noble gesture,” compares it to other gestures such as thumbing your nose or sticking up two fingers – which gave us a splendid excuse for doing just that to our English teacher when we read the script in class. My second memory is of a school outing to a production of the play, in which the stark blackout accompanying More's execution resulted in mass booing from the audience, because we were all 15 year olds and we wanted to see a head.

I failed English Literature O Level, in case you were wondering. Most of our class did: our English teacher's plan was to concentrate most heavily on the Language exam (which we all aced, in the end), assuming that we'd have a better appreciation of literature later in life with a solid set of language tools to hand. You'd imagine that today, in an educational environment that's entirely measured by exam results, that approach wouldn't go down well. But I have to admit, he was right. Coming back to A Man For All Seasons nearly forty years later, it's apparent that the writing's simply too good for teenagers to appreciate – there's a huge amount of wit in the dialogue that appears to have gone straight over my head at the time.

We all know the story, of course – or at least I assume we all do, so apologies for spoiling the ending two paragraphs ago. King Henry VIII (Robert Shaw) wants an heir, and his wife Catherine of Aragon isn't delivering the goods: so he sets up a gigantic series of constitutional changes which will allow him to divorce her, in direct contravention of the laws of the Catholic Church. Pretty much the whole of Henry's court is ready to roll over and let him do what he wants, with one major exception – his Lord Chancellor, Sir Thomas More (Paul Schofield), who's too devout a Catholic to allow the King to get his way, no matter how much pressure is put on him to change his mind.

Robert Bolt's play frames this dilemma as a series of moral debates between More and his many rivals. You still get glimpses of that structure in his screenplay adaptation, where every so often we hit a big two-in-a-room scene where the dramatic meat of the story occurs. But director Fred Zinnemann makes this potentially stagey material surprisingly cinematic: every scene looks wonderful thanks to the outstanding photography and design, while the simple device of structuring the plot around a series of journeys up and down the Thames gives a literal flow to the storytelling. And it's magnificently acted, though that goes without saying: a production that can hide Vanessa Redgrave away in a non-speaking cameo role has talent to burn.

The immaculate restoration job by the good people at Sony is the icing on the cake, but does make me wonder if we're ever going to see their restoration chief Grover Crisp introduce a film at this festival again. Anyway, aside from the LFF, this should eventually be getting a re-release courtesy of Park Circus, and is definitely worth a re-watch if your previous memories of A Man For All Seasons are based around Sunday afternoon telly, or struggling with it for O Level. 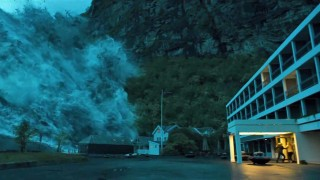 You may have noticed that over the last couple of years, my work has taken me out to the Nordic regions on a regular basis – hence the high proportion of Scandinavian reviews in my Monoglot Movie Club series for Europe's Best Website. Without wishing to generalise too much across the countries in the region, it strikes me that their cinema falls into two categories: films made for the domestic market which are tied around local subject matter, and more generic offerings that are aggressively targeted at the rest of the world. The Wave falls firmly into the latter camp, and appears to have been successful on that score: it's apparently just acquired UK distribution, and has been chosen as Norway's entry on the shortlist for next year's Best Foreign Film Oscar.

The first half of The Wave is certainly generic as hell, apart from a brief opening burst of newsreel footage to convince us that Norway is riddled with fjords that are ready to collapse at any minute, causing a landslide that could result in a tsunami. Got that? It may be important later. So from there we're introduced to Kristian Eikfjord (Kristoffer Joner), a geologist who's just about to quit his job at a fjord monitoring centre and move to the city. On his final day, the centre's equipment suddenly detects a bit of a wobble. Kristian's concerned about that, but the rest of the team doesn't think it's worth investigating further. So Kristian, his wife Idun (Ane Dahl Torp), and their two kids prepare to spend their last night in town at a hotel in a low-lying region overlooking the water, because there's no way that could possibly end up being a problem.

It's hard to tell how tongue-in-cheek this parade of cliches is meant to be, particularly when Kristian discovers they all have ten minutes to get sixty metres above sea level before the tsunami hits, and reveals that his watch has both a stopwatch function and an altimeter. It makes the setup portion of the movie a bit of a chore to watch. But as soon as the fjord hits the water and we get the wave of the title, there's a spectacular gear change into a ruthlessly efficient disaster movie – the second half is a brilliantly tense succession of action setpieces. Part of what makes it work so well is director Roar Uthaug's sparing use of CG effects. Sure, we get a couple of money shots of gigantic waves crashing towards populated areas for the trailer: but they aren't the scary bits. Uthaug cunningly contrives events so that when the wave hits our principal characters, it's depicted at a much smaller, more claustrophobic scale. It's a better way of using the budget, to be sure: but it's also easier to get your head around that than an entire town being menaced by some pixels, and therefore grabs you harder.

You couldn't really say that The Wave is a thrill ride from start to finish. But from middle to finish, it's probably one of the best disaster movies we've had in years. Nevertheless, you can't help reflecting on what a shitty family the Eikfords are. Without wanting to give too much away, a careful analysis of the plot will reveal that several people actually die as a direct result of their actions at various points. But because they're the lead characters in the film, we're meant to care more for them. A properly satisfying conclusion to the film would have been for the Eikfords to have all been immediately killed by the tsunami, and for the other people to have been left alive. Maybe the director's cut will fix that.