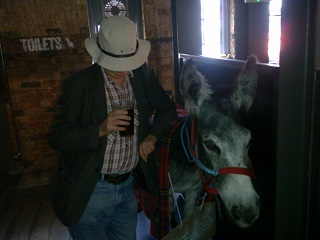 BrewDog have been threatening a bar in Brighton for ages now. Given that the place is basically London-On-Sea, it’s a good fit for their demographic. The problem was finding a decent spot. As long ago as the 2014 AGM, they were talking about setting up shop on Grand Parade. There was a catch, though: their location of choice used to be the Blind Tiger Club, a music venue that closed in suspicious circumstances when someone moved into the upstairs flat and then complained to the council that loud music was being played downstairs. (There’s a lot of it about.)

As the period between the initial announcement and the opening stretched into a second year, it seemed possible that arsehole neighbours might have stopped anything louder than the playing of board games at Grand Parade. But then, in August, it all came together, with an announcement that BrewDog Brighton would finally open its doors over the Bank Holiday weekend. Perfect timing for a day trip, then.

To be fair, that last one got a lot of attention. The day before our day trip, we mentioned it to a few mates, and all of them had seen the story in that morning’s Metro about the Taxidermy Taxi. BrewDog had mounted a stuffed donkey on four wheels, and for the opening weekend of the bar they would let you call it up using the Twitter hashtag #TaxidermyTaxi and use it to transport you to and from the place.

Given that our trip to Brighton was also going to cover a few of our regular haunts, it made for a tough decision: would we ask it to pick us up from Vegetarian Shoes, or drop us off at meat-free restaurant Terre a Terre? I couldn't really concentrate on which to choose, being distracted by the sound of The Belated Birthday Girl's loud tutting. As it was, our hand was forced by a screw-up shortly after our arrival in Brighton, when we spent ages failing to find the comics section in Dave's Comics. Once we got outside and looked up, we realised what we'd done - we'd gone into Dave's Books, the related non-comic shop two doors down from the one we really wanted. Either way, Dave's Books didn’t feel like the sort of place you could hang around in while waiting for a dead animal to pull up outside, so we just walked from there to the bar instead.

The first surprise was realising that we must have walked past the old Blind Tiger Club last time we were in town, for the occasion of Dave’s 50th birthday – the bar's located directly across the road from the University of Brighton gallery, where we saw an exhibition of Jan Švankmajer’s stuff back in 2013. The second surprise… well, you’ll have to wait a while for that, as once you reach the building there aren’t all that many surprises. It’s a medium-sized example of the modern BrewDog style, with all the individuality we used to associate with them hammered out of it by corporate branding. In particular, it’s the first one of these bars we’ve seen that doesn’t have any obvious pictures on the walls identifying the staff. (Although their Facebook page seems to suggest that I just wasn't looking hard enough.)

The staff, it has to be said, are a terrific bunch. There’s the usual friendliness that’s obviously a part of the training, encouraging punters to try out new beers and see which takes their fancy. But when I stroll up to the bar and demand a free beer, they’re even more friendly and delighted than usual. It’s one of the perks of being a shareholder – and if I was ruthless enough I’d link you to the share purchasing website and tell you to use my personal referral code so that I get a cut for encouraging you to invest, but I can’t be arsed – anyway, on your birthday, if you can present the bar staff with a shareholder card and proof of your date of birth, you’re entitled to a free measure of one of their standard beers. Pint of 5AM Saint, please, thank you very much.

As I’m drinking my birthday pint, I spot the Taxidermy Taxi in a frustratingly badly lit corner of the bar. It’s frustrating because it rapidly becomes apparent that photo opportunities are all it’s good for. The problem with the stunt appears to be this: nobody is sure whether it’s just a cheap gag to get into the papers, or a real thing. You can tell it’s a problem because they’ve chosen Twitter as the means of ordering a ride, and it's a doddle to search for all tweets using the hashtag #TaxidermyTaxi. On the Saturday we were there, the hashtag was used a grand total of four times: twice in passing by people talking about it, once by me, and one genuine call from some punters asking for a lift from Hove, the cheeky sods. The next day, when another request came through for a ride, they were told “even donkeys need a day off.” A day off from what, exactly?

Still, I told you there were other surprises, and here comes the other big one: the food. This is where the anti-chronological scheduling of these pieces starts to work against me, because in recent months the menus have shown signs of getting interestingly diverse, from the evidence of Dog Eat Dog and Soho. But back in August, there was a stultifying lack of choice as you went from bar to bar, with the infamous meat-heavy Bates Menu holding sway almost everywhere with one or two exceptions. Brighton, however, counts as a great example of one of those exceptions. Included in their opening weekend menu were some early experiments with the patty melts that have subsequently become the mainstay of the Soho bar, a couple of interestingly boozy desserts, and a satisfyingly spicy fish finger po’boy to confirm that it's not all just meat meat meat any more. Food at BrewDog appears to be changing: let’s hope it doesn’t just settle into a different rut.

Craft beer is pretty much designed for the Brighton mindset – one other new discovery we made on the day was fancy bottle shop Bison Beer – so there was no doubt that this bar was going to be a success. It was fairly buzzing on the Saturday afternoon, but when we came back after dinner on Saturday evening, it was positively rammed. It was gratifying to see BrewDog boss James Watt there: he’d actually just arrived as we were on the way out earlier, but was still there four hours later, sitting at one end of the bar surveying his newest acquisition and working his way through taster glasses of all the beers. It was an impressively hands-on bit of management, showing the awkward balance he’s trying to maintain between being a cottage business and a brewing giant. We’ll keep you informed on how he's doing with that.