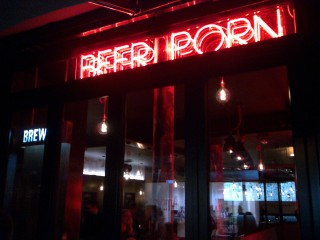 I can't really say too much negative about the bar, anyway, because it's early days yet. Very early days, in fact. Two days before the official opening, to be precise. I'm actually writing all this in the middle of the shareholder preview of the bar on November 4th, where those of us with shares get to be the first people to see what it's like. There's an official press launch on November 5th, and then real people get to drink here starting on November 6th. The Belated Birthday Girl and I have only been to one shareholder preview before now - the one for Shepherd's Bush - and jumped at the chance to blag ourselves an invite to another one. Trouble is, barely half an hour after we burst through the doors and grabbed our first beer, she had to run off for a couple of hours for another prior engagement. Which means I'm currently sat in the middle of a crowded West End bar on my own, looking for ways to occupy myself for 180 minutes or so. I've decided the best thing to do is sit here with my laptop, reviewing the place using their own wi-fi, and hoping that the bar staff providing helpful table service don't realise exactly what I'm up to.

The Soho bar was first announced back at the Annual General Meeting in June, where the eagle-eyed would have spotted that they'd got their eye on a site that was still, at the time, the home of the B-Soho pizzeria and cocktail bar. The BBG and I popped around to check out the building just after it closed, and were a little perturbed by just how big the place looked from the outside. If this tour of the BrewDog bars of the world has taught us anything, it's that the smaller bars are the ones that work best. Camden, for example, is still our favourite, while the BrewDog Megastore in Shepherd's Bush is still that bit too large to maintain an atmosphere. (And don't get us started on the Brussels bar. Actually, do, but wait a few weeks and we'll get around to it then.)

But based on the evidence of the opening night - with, admittedly, a massively biased group of punters in attendance - the size of the Soho bar isn't an issue at all. BrewDog are boasting that it's one of their biggest bars, but the way the space is used is crucial to its success. It occupies two stories, which is true of a number of their other bars - however, it's split into two levels of equal size, rather than the main-bar-plus-appendix layout of Camden, Shoreditch, Leeds and so on. At ground level, it's an open plan area with a few big tables and some nicely sized side seating areas: downstairs, the equivalent amount of space is broken up into several cosy booths. Wherever you sit in the ground floor bit, you've got a decent view of virtually all of the rest of it, which I think is a decent measure of the degree of intimacy you require. Aside from the neon additions, it's mostly decorated to the newer, tidier BrewDog template - exposed bulbs and chickenwire replacing the frosted glass and blackboard anarchy of old, no pictures to introduce the bar staff, and no customisation in the toilets at all.

The beer is as you'd expect: twenty taps split between guest beers and BrewDog's own. On this particular night, in acknowledgement of the more recent demographics of Soho, we also got the launch of a new beer: an unexpectedly hoppy kolsch called No Label, which we all got a free glass of on entry. The theory is, it's made from hops which have transitioned from female to male flowers prior to the harvest, meaning they can hype it as 'the world's first non-binary, transgender beer', and can pass on the profits to a charity that benefits transgender youth communities. It's a noble cause, and I'm sure it has nothing to do with them backtracking from the shitstorm that kicked off recently when one of their failed attempts at humour failed even more spectacularly than usual. Still, the additional free glass of Born To Die - introduced by the traditional sight of BrewDog boss James Watt standing on a bar and shouting - proved a much less controversial affair, unless someone out there is planning to call him out for using language based around binary life states.

So, no real surprises with the beer. But the food is another story - particularly given some of the grumpiness that's emerged online regarding the other new BrewDog bar that opened this week, in Glasgow Merchant City. Expect a review of that one early in 2016: but if the opening weekend is anything to go by, there won't be much for The BBG to enjoy, with Batesian levels of meat on the menu and only side dishes available for the non-meat eaters. Still, you could stereotype wildly and suggest: well, that's Glasgow. We're in Soho now, and they do things differently here. The food menu is the most astonishingly diverse one I've seen in any BrewDog bar to date, taking some of the best ideas from all over their empire and squashing them into a single location: basic bar snacks like hop-flavoured fries, miscellaneous platter assemblies, a variety of melty sandwiches, the best hotdogs from the Angel menu, and that Cocoa Psycho affogato that always gets me damp whenever I visit Musa in Aberdeen.

All the menu categories have one or two veggie options under them, so there's plenty to keep the likes of The BBG happy. So once she'd eventually made it back to the bar again (during which time I'd nursed a Stone Go To IPA and a Pressure Drop Pale Fire for as long as was respectably possible), we gave the menu a quick trial. We went for a couple of melts - The BBG plumping for the veggie haggis, while I went for the mushroom and Swiss cheese burger. Both were accompanied with hoppy fries (which are terrific, although The BBG ate the last chips in the building and I had to make do with crisps instead) and pickles (which I can't be arsed about, but she thinks are spicy and have a real kick to them). The sandwiches themselves are glorious things, toasty cheesy doorstops full of tasty stuff - both the carnivorous and non-carnivorous versions are lovely.

So, in summary. Hey, BrewDog? Given the awkwardness of the seventies throwback neon, and the can't-please-anyone issues you're still having with the trans community, maybe you should just focus on doing great beer and - a real plus here - equally great food, and try not to mention sexuality in any context ever ever ever again. Just sayin'.