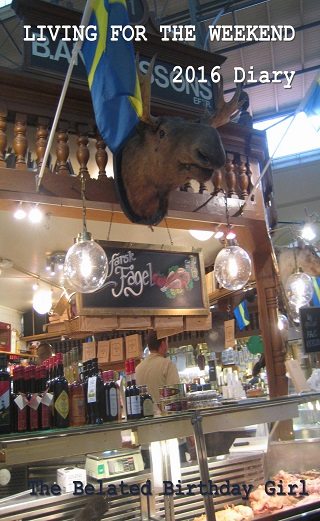 This is the fifth one of these things that The BBG has published, so if you don't already know the story behind Living For The Weekend then the promotional articles for the 2012, 2013, 2014 and 2015 editions should fill you in. As ever, the concept is to provide you with a diary format which nobody seems particularly keen on copying - presenting the week across a single two-page spread, where the tedious working week is squished up onto one page while the fun-packed weekend sprawls flamboyantly over the other one.

The one main difference between these diaries from year to year - apart from having to redo every sodding date by hand, of course - is the space at the back for what we've come to refer to as 'the projick', ever since the start of the first one in 2013. Each year, The BBG sets herself a goal to visit a dozen new places of a particular type, logging them in that back section of the diary as she goes. The 2013 projick involved visiting all the BrewDog bars that existed at the time, and you've probably noticed that's turned into an ongoing thing. In 2014 she turned to Unfamiliar London, aiming to go to twelve areas she hadn't been to before and check out the quirky small businesses in each: that didn't work out so well, and she's still a bit grumpy about that, so shhh. But 2015 was a triumphant success, as we clocked up a dozen or so small venues - music, comedy and theatre - that were new to us. There's probably an entire article in that, which may turn up here over the Christmas break if we can find the time to compare notes.

This year? Well, you could argue that we're returning to the territory of 2013's BrewDogging quest. But we've always said that BrewDog has been a gateway for us into the whole small brewery scene, both in the UK and abroad. There are loads of craft breweries all over the place these days, many of them holding regular brewery taps where you can drink the brews and meet the brewers on site. So, that's our plan: during 2016, we intend to visit twelve brewery taps, avoiding the ones we've already been to like BrewDog's DogTap and the various ones along the Bermondsey Beer Mile.

If you fancy playing along with us for that one, then you really should consider documenting the breweries you visit in the Living For The Weekend 2016 Diary. It's a mere £3.99 before VAT and postage, and they do seem to be turning them around pretty quickly at lulu.com - the copy we ordered late at night on Saturday December 19th turned up here on Wednesday 23rd. And while you're there, don't forget to have a look at the other books we've published on my Lulu page. I'll try to get the new LFF review volume up there some time in 2016, but no promises...