Home Archives/Categories About Me RSS Feed Mailing List Email
Fat Child In A Pushchair*: Pick Of The Year 2015
Living For The Weekend: A 2016 Diary By The BBG 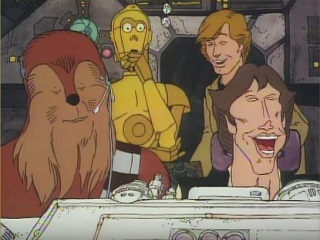 The key was revealed four years ago by a programmer called Rod Hilton, who in his spare time writes a tech blog called Absolutely No Machete Juggling. In 2011, a fanciful idea that he posted on the blog rocked the world. It went like this: as we all know, the Star Wars films are planned to ultimately form a nine-part series, consisting of three trilogies. Famously, George Lucas made the middle trilogy of Episodes 4-6 first (Star Wars, The Empire Strikes Back, Return Of The Jedi), and then followed it up by jumping back in time to the first trilogy of Episodes 1-3 (The Phantom Menace, Attack Of The Clones, Revenge Of The Sith). The problem is, you can watch these films either in the order they were made, or in the order determined by their episode numbers, and either way there are ludicrous inconsistencies between them.

Hilton discussed these inconsistencies in some detail, and came up with a radical solution that he called Machete Order (after the blog). In brief, and without the inevitable spoilers contained in his explanation, it's this - watch 4 and 5 to take you up to the point where the Big Surprising Thing happens: then watch 2 and 3 as a flashback that explains how the Big Surprising Thing came to be: and then go back to 6 to pick up on the fallout from the Big Surprising Thing and how it drives us towards the epic climax. (Meanwhile, throw 1 in the bin, as it doesn't contain anything relevant to the overall story at all. He does have a point there, which makes the existence of this page a little awkward for me nowadays.)

It seems like a brilliant idea, but I've never had the time to try it with the movies. So let's compromise, and try it with the trailers instead. (And the original release trailers too, none of this Special Edition bullshit.) Plus, let's throw in the Episode 7 trailer at the end to see if it continues to hang together. Got fifteen minutes to spare? Then press play.