MOSTLY FILM: By The Sword 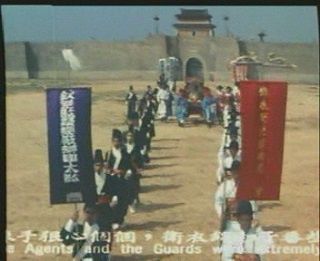 Last week, the website Dulwich OnView referred to that place I sometimes contribute to as "the acclaimed film blog Mostly Film." I think that's a rather lovely thing to be honoured with, even though The Belated Birthday Girl keeps on trying to ruin it by asking "acclaimed by whom, exactly?"

Still, I feel a little bad about trying to grab some of that acclaim for myself. After all, there are only three articles I ever write for it. The most obvious one is I Went To See Some Movies Abroad And Couldn't Quite Understand What They Were Saying, which I've managed to get published in 21 minor variations so far. Close behind that comes I Went To A Film Festival And Saw So Many Films That I'm Going Way Over My Allotted Word Count (and there'll be another one of those coming next week).

But there's a third type you may have missed, which is this: I Saw An Old Film And A New Film That Were Somehow Related To Each Other, And The Old One Was Better. I wrote it on the very first day of Mostly Film's existence, comparing Repo Man with Repo Chick. Subsequently I've done the same with the two versions of Maniac, and the various exploitation documentaries of Mark Hartley. And now, in a weekend where two Taiwanese swordplay epics have been released in the UK, I've written a pair of articles comparing them - Hou Hsiao-Hsien's 2015 cinema outing The Assassin, and King Hu's 1971 Blu-ray debutante A Touch Of Zen.

Yes, the old one was better. But read both articles anyway, and enjoy the Red Button Bonus Content here.

Simian Substitute Site For January 2016: Year Of The Monkey Sweets 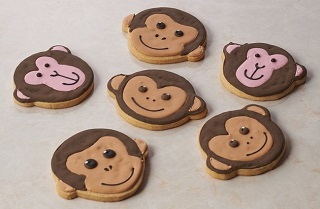 Comedy: Whenever a Simian Substitute Site post falls on January 1st, one of three things tends to happen. 1: I write the post in advance, so that all I need to do on the day is literally push a button. 2: I write the piece on January 1st itself, under the influence of a massive hangover. 3: it goes up late. This is one of those '3' years, apparently. The Belated Birthday Girl, because she is a bloody genius, has suggested that if I get this online before noon GMT on January 2nd, it'll still be New Year's Day somewhere on the planet: specifically, the uninhabited atoll of Baker Island in the US Minor Outlying Islands. I'm prepared to clutch at that straw. Anyhoo, as is generally the case, the delay in posting this article can be laid squarely at the feet of Ivor Dembina, whose Hampstead Comedy Club was responsible for our New Year's Eve celebrations. This year he moved the gig from its usual Camden location to The Albany, a pub on Great Portland Street with a fine selection of ancient and modern beers, not to mention a nicely arranged basement concert room. For the bargain price of £15 we got three comics - Tom Ward, Leo Kearse and the show-stoppingly intense John Robertson - plus Ivor's mate Andy Zapp, who made up for the awfulness of his jokes with the magnificence of his post-gig disco. The gap between the 11.30 halt in comedy and the chimes of Big Ben is one that the Hampstead Comedy Club has traditionally handled badly, but this year Andy simply plugged his iPhone into the PA, got it to filter out any MP3s of music released in the last 20 years, and it went down a storm.

Movies: So, one paragraph later than it really should be, Happy New Year to you all. 2016, eh? The problem I have with the year is this: whenever I read that number, I always imagine it being yelled repeatedly in a Ghanian accent, and accompanied by images of children being kicked into the air by aliens. That's all because of the trailer for 2016, one of those berserk African movie clips that went viral a few years ago (see also: Who Killed Captain Alex). At the time, there was an excellent Mostly Film piece called Adventures In Nollywood written by my colleague CaulorLime, and in the comments I asked "do those African action movies like 2016 and Who Killed Captain Alex actually exist in any form other than 90 second YouTube montages of yelling and shit CGI?" Finally, I have an answer to that one. Here is part one of 2016: and here is part two. I haven't dared watch it myself yet, as I spent most of yesterday out with Spank's Pals watching what was almost certainly a better movie. At the very least, I think Jennifer Lawrence is a much more sympathetic way to treat a New Year's Day hangover.

Music: "You got any Christmas music?" "This is Christmas music." This month's Spank's Audio Lair playlist isn't as crammed with new music as usual - instead, it's a collection of old comfort tunes that played on the stereo at Château Belated-Monkey during the holiday week. Admittedly, it's somewhat overbalanced by the appearance in the middle of Beethoven's End Title Theme To Die Hard, but we listened to it after watching the film at the Prince Charles Cinema, so it's entirely justified. One or two of the tracks here were even experienced on long-neglected slabs of vinyl, which I got to listen to for the first time in ages thanks to The BBG getting me a Crosley Cruiser turntable for Christmas. While we're on the subject of music, can I remind you that the 2015 CD competition is still ongoing? Yes, Dave has submitted his entry, but don't forget that it's the closest guess that wins rather than the first received, so it's all still wide open. You've got till the end of January: enter now!