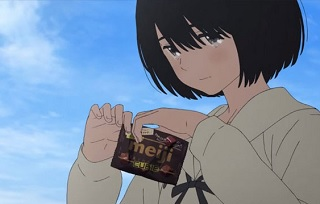 The relationship between the Japan Foundation Touring Film Programme and MostlyFilm has been a close one since 2012. Each year, I'm sent a package of DVD screeners from the latest collection of new and classic Japanese cinema being shown around the UK, and I write a review of them for Europe's Best Website. (Here's how that looked in 2012, 2013, 2014 and 2015.) This year, the programme is the biggest one yet - fourteen films in total, with an overall theme indicated by the title IKIRU: The Highs and Lows of Life in Japanese Cinema.

During the week between Christmas and New Year, a large Jiffy bag plopped through the letterbox at Château Belated-Monkey, containing DVDs of ten of those fourteen films. It took me a month to get through them all, but I did, and the resulting reviews appeared on MostlyFilm last Friday (the opening day of the tour) under the title Highs And Lows.

The tour's been running for nearly a week now, during which time I've managed to see the final four films in the collection during their run at the ICA in London. So, for completeness' sake, the Red Button Bonus Material for my MostlyFilm review will cover those four films, plus some extra bits and pieces too. 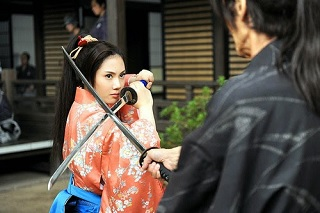 I said at the end of my original review that samurai drama is the one aspect of Japanese life not covered in the Ikiru season: but it turns out that isn't strictly true. At least, we have one film about the making of samurai drama. Ken Ochiai's Uzumasa Limelight is a wry look at the current state of the genre, in an age where period swordplay pieces are relegated to TV rather than the big screen: where CGI replaces physical skill, and pretty idiots from boy bands hog the leading roles. For veteran actors like Kamiyama (Seizo Fukumoto) - a kirare-yaku, the name for the faceless guys who line up to be killed by the hero - it seems like it's the end of a career. But then young actress Satsuki (Chihiro Yamamoto) approaches him for advice, and his career enters a new phase. Taking Charlie Chaplin's Limelight as a touchstone throughout (Uzumasa is the district of Kyoto where the movie studios are), this similarly focusses on the passing of skills from one generation to the next, but does it with just the right amount of sentiment. Far too often, Japanese movies feel the need to over-emphasise every emotional moment: what makes Uzumasa Limelight special is its willingness to guide the viewer towards a reaction, rather than tell them exactly what they should be feeling. It's an approach that pays off superbly with the ending - there are several places where Ochiai could have chosen to stop telling this story, and he's chosen the most perfect one.

If the audiences at the London screenings in this tour are anything to go by, then - somewhat predictably - it's the anime events that will really pull in the numbers. Tatsuyuki Nagai's Anthem Of The Heart, which played to a packed house at the ICA, starts from a misunderstanding that's uniquely Japanese - little Jun has romantic fantasies about the huge fairytale castle in her town, not realising that it's a love hotel which sells its rooms by the hour. When she tells her mum that she's seen her dad coming out of there with some princess or other, and her family splits up shortly after that, she realises that her words are responsible and vows never to speak again. A decade or so later, an idealistic schoolteacher assembles a total Breakfast Club of misfits to put on the annual community outreach show: a jock, a cheerleader, a boy with an aptitude for repurposing old showtunes, and a girl who's about to discover how musicals let you sing the things you can't say. A fluffy coming-of-age fantasy which never lets you forget that's it's driven by massive psychological damage, Anthem puts together things that were never meant to go together - like its central characters, or the two pieces of music that make up its finale - and somehow makes something delightful out of them. Along the way, it also gives us a depiction of a class of high school students actually being nice to each other, which is so rare in Japanese cinema as to count as a miracle in its own right. 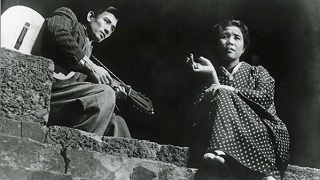 It's only in recent years that the Japan Foundation has chosen to mix in older movies with its more recent selections, but it's a terrific move on their part, particularly in terms of showing how Japanese attitudes have changed over the years. Keisuke Kinoshita's A Japanese Tragedy is a perfect example of this. It nails the post-war confusion of the country without a shred of nostalgia or special pleading, simply by virtue of being made in 1953. It's got a real torn-from-the-headlines feel to it, using newspaper front pages and newsreel footage to depict the chaos Japan had fallen into after 1945. At its centre is Haruko (Yoko Mochizuki), a black marketeer turned bar hostess who's trying to raise two teenagers on her own. Her son studies hard, but is trying to arrange a suspiciously late adoption for himself: her daughter is learning English, but doesn't appear to know exactly where she goes beyond that. As we jump audaciously between the present and the past (with flashbacks only delineated by an eerie absence of all sound apart from dialogue), this family comes to symbolise everything that Kinoshita thinks has gone wrong with Japan since their defeat. It's a viewpoint we don't usually get to see - after the fifties, Japan's war stories became a lot more sentimental - and the harder edge of Kinoshita's analysis makes for thrilling viewing. He gets across the sheer confusion that many people felt once they discovered they were on the losing side, and their willingness to do whatever it took to make them feel they were winning again.

Ten years after A Japanese Tragedy, there was an economic upturn in Japan, bringing a new national stereotype and a new English loan word to accompany it - the salaryman. The image of the repressed hard-working drone has been as ripe a subject for comedy there as it has been in the UK, though Kihachi Okamoto's The Elegant Life Of Mr Everyman is an atypical example of the genre. Its hero, Eburi (Keiju Kobayashi), is struggling through a dead-end job at an ad agency, until the morning after a post-work bender when he wakes up to discover he's drunkenly accepted a commission to write a novel. Taking his own life as source material, and scrutinising it in ridiculous detail, turns out to be a very successful approach for both him and the film. There's a certain style of movie comedy that's become popular in Japan over the last decade or so - picaresque in its wayward approach to plotting, and avant-garde in its use of non-naturalistic techniques like animation, jump cuts and freeze-frames. I'd always assumed that it's a style which originated with early noughties movies like Kamikaze Girls, so it's fascinating to see it being used in a 1963 film. Once Eburi becomes a successful author, though, he also becomes a crashing bore, and the film can't find a way of depicting that without becoming boring itself. You can show the characters he's spouting off to yawning, but that won't stop the audience from yawning too. In the middle of the climax's extended long dark night of the soul, we finally see a glimpse of the confusion and rage that also fuelled A Japanese Tragedy, but you have to plough through an awful lot of babble to get to it.

So, that's all fourteen films in the Ikiru season reviewed for you. If you want to find out more about them, here's a playlist of trailers: if any of them tickle your fancy, visit the JFTFP official site for full details of screening locations and dates. And if the film you want to see isn't playing anywhere near you, you could always use the Amazon links below to get the DVDs - they're listed in the same order as the trailers. Be warned, virtually none of these come with English subtitles, and the one for Tale Of A Butcher Shop isn't even a DVD - you'll have to make do with a souvenir photo book for that one. (I know, I know.)