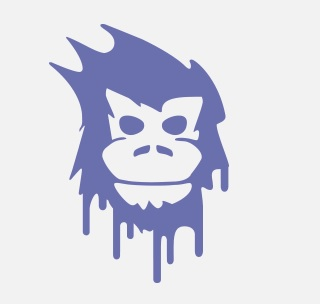 In the meantime, your Simian Substitute Site for April 2016 is The Fool Monkey, or at least the Facebook page of the French band of the same name. They're a trio based in Bures-sur-Yvette, and according to their bio they're "un groupe mêlant rythmiques funk groovy endiablés et passages plus rock à tendance progressif." Their mission statement is, I believe, "faire bouger les bassins de ces dames ou faire jumper ces messieurs est une priorité," which comes out in Bing Translator as "move the basins of these ladies or make jumper these gentlemen is a priority." If you want basins moved or jumpers made and you're reading this at the start of the month, they're playing MJC Boby Lapointe on Saturday April 2nd: otherwise, you'll have to make do with a couple of songs they've uploaded to YouTube.

Coming this month - well, probably not as much stuff as last month, I'll admit it. But there should be some more MostlyFilm posts (it's our fifth birthday on Monday, you know), a bit more BrewDogging, and hopefully some other stuff too. Comments, anyone?

>Comments, anyone?
Keep up the good work Spank!