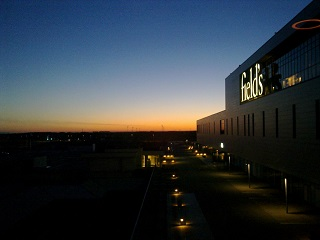 As much as I like to boast that my job takes me to all manner of exotic locations, most of the time it’s the same few exotic locations: frequently somewhere Scandinavian, with the occasional trip out to the Middle East. This is why all the Monoglot Movie Club pieces that aren’t conceived during a holiday tend to focus on those two parts of the world. (Although having said that… no, let's save that announcement for a month or two.)

Anyhoo: last month, I was in Copenhagen again. I was last there about a year ago, when I reviewed a couple of Danish movies for the good people at MostlyFilm. It's a similar deal for my 2016 trip, although this time around there are a couple of new things to report on. The films I saw on this particular visit are reviewed in a piece provocatively titled Garbage Language For Garbage People: the rest of the stuff I did that week is covered in the Red Button Bonus Content, directly underneath here.

My Copenhagen business trips now have a well-defined structure to them. I’m working in an office in the new town of Ørestad, halfway on the whizzy train line between the airport and the centre of the city. The Cabinn Metro – previously discussed here – continues to be the most convenient place to stay in the area, not to mention ridiculously good value for money. Close to that is Field's shopping centre, which led to an entertaining discussion with one of my co-workers that week.

Humour never really travels, does it?

When I first went to Field's back in 2014, Nordisk Film was in the middle of constructing a cinema inside it, but it was some way off completion. When I returned in 2015, the opening was tantalisingly close, with 'coming soon' signs throughout the centre. And now, in 2016, it's finally here. Nordisk Film Biografer Fields is a solidly constructed nonoplex in the modern style, and appears to be efficiently run throughout. That's where I saw the two films reviewed in Garbage Language For Garbage People, De Standhaftige and Flaskepost Fra P, which we'll return to at the end of this piece.

But there's more! The food court on the top floor of Field's used to be much the same as every other mall food court you've ever encountered: a circular arena full of tables, surrounded by a mixture of junk food franchises and generic restaurants. These restaurants are now serving a nine-screen cinema as well as hungry shoppers, so they've had to up their game. This is presumably why the top floor has now been rebranded as a Food Lounge. I was looking forward to seeing this as much as the new cinema, so was a bit disappointed to discover that the Food Lounge is mostly the same set of restaurants with a lick of paint applied. No insult intended to the likes of The American, which is perfectly fine for a pre-film burger, but I was hoping for a more dramatic overhaul than that.

Having said that, there are a couple of new restaurants in the court which seem to be targeting a higher class of punter. Dalle Valle is one of them, a chain cafe whose Field's branch is notable for its huge windows overlooking the city, as well as a couple of decent midweek dining deals. Meanwhile, on the ground floor of the complex, Gorm’s is another chain offering rather fine artisanal pizza made by men with beards, and was probably responsible for the best meal I had all week.

With all the new food and cinema options in Field's, it would have been tempting to spend the whole week in Ørestad and not venture into central Copenhagen at all. But that seemed a bit of a waste of their rather good transport system. So on my final night, I took the metro for the first time since our Christmas 2007 holiday, and headed out to Nørrebro in the north-west of the city. My first stop was the bar Mikkeller & Friends, one of two in the city owned by local gypsy brewer Mikkeller (in as much as a gypsy could be said to be 'local', of course). I'm not a huge fan of Mikkeller's beers, which can be variable as hell and sometimes verge on a parody of craft beer artiness. But this is Mikkeller & Friends, and their friends include To Øl (whose products I was enjoying just a few days earlier at the BrewDog AGM) as well as a selection of guests.

The bar's a light, airy, friendly affair, and even though I was on my own I could see myself easily settling down there for the evening. If they'd had more food on offer, I might have tried to eat there and claim it back on expenses, but they're more geared towards bar snacks than full meals. So I made do with a sizeable lump of Vesterhavs cheese to accompany my beers (To Øl's Friends With Benefits and Mikkeller's Nørrebro Wit), and then wandered back into Nørreport to find somewhere for a proper meal. With the aid of my Rough Guide, I ended up at Paludan Bogcafe. Bookshop cafes aren't a particularly radical idea - we visited a couple of great ones in Naples, for example - but I don't think I've encountered one which puts as much effort into its food as this one does. The oven-baked salmon I had there made for a rather lovely dinner on my final night in town.

Let's wrap all this up with trailers for the two films I reviewed in the original MostlyFilm piece. In the case of De Standhaftige, notice how both the A's in the title have one leg missing. Subtle, eh?

As for Flaskepost Fra P, the trailer gives you a good idea of what the film's like: the Easter egg at the end of it is something else entirely. Don't turn it off early...