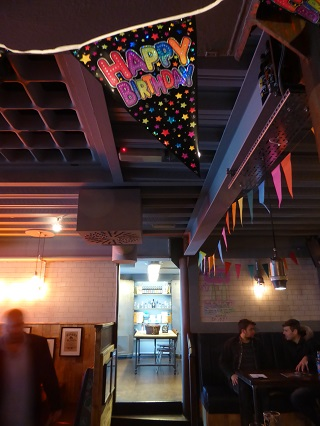 For a start, the Saturday marked the first birthday of BrewDog Leicester itself. When we rolled in there shortly after noon that day directly from the train, the place was disconcertingly empty: but it did mean that we could drink a couple of lunchtime pints in peace and watch as the bar staff stood on all manner of distressingly unsecured platforms to hang up the balloons and banners that a birthday party requires. At first glance, it's a decent enough bar, a little on the large side with an upstairs function room as well (we never get to investigate the latter over the weekend). There are some interesting bits of local art on display, including a fun Star Wars piece credited to Barry D Bulsara (who's either chosen to name himself after the guy who was alleged to have killed Jill Dando, or was unlucky enough to have that name already). But it's a little hard to focus with all the empty space around.

Happily, things are a lot more buzzy the next four times we visit over the weekend. On the Saturday night the bar's in full-on party mode, with lots of happy punters buying lots of hoppy beer. The interesting thing to note is that some of that beer's being bought to take away. A prominent feature of the bar is another one of those on-site BottleDog shops that are becoming so prevalent - but whereas the others have been notable for pulling down the chicken wire and closing for business around 10pm, this one appears to share the same opening hours as the bar. It makes the prospect of grabbing an interesting-looking bottle and drinking it at the bar even more appealing than usual, and that's just what we do on a later visit - or more accurately, we get a couple of cans of Crafty Devil's The Devil's Knuckle and Magic Rock's High Wire Grapefruit. The other big attraction on the night of the birthday was the equivalent of a bake sale, with beery desserts on sale to raise money for a local canine charity. I'm not sure how popular these were, but the staff seemed ridiculously delighted when I asked them to make a pair of Dog E ice cream floats for a midnight snack.

Our Sunday and Monday visits weren't quite as buzzy, but they certainly had their moments. And it was particularly interesting to see just how full the bar was on the Sunday afternoon. Because this is where we need to address the other big event of the weekend: the possibility that on the Sunday, Leicester City could have got the final couple of points that would have made them Premier League Champions. As you'd imagine, the town was swimming in blue and white flags all weekend, and excitement was at fever pitch. All they had to do was, um, beat the football team that I support. For this reason, The Belated Birthday Girl and I decided that fun as it would be to watch Leicester pull it off in their home town, I couldn't really be trusted with my own reactions. On the day of the match, it was enjoyable enough  to watch the streets as a dispassionate observer: the groups of fans gathering in pubs being interviewed for the telly, the streets becoming completely deserted at the 2pm kickoff. BrewDog has never really been a sporting chain of bars, so it was interesting to spend the second half of the game in the Leicester bar with no TV on, sharing space with a decent-sized group of drinkers who presumably didn't care about the outcome either. With careful positioning, we could eat our Pieminster lunch next to a window and judge the progress of the match from the reaction of the punters in the pub over the road. We could spot the final whistle as soon as it happened.

So, what else to report? Well, we stayed at the Premier Inn, sharing it with a giant Indian wedding party whose attendees appeared to be occupying every other room in the place. We went elsewhere for breakfast both days, with some fancy veggie options at Mrs Bridges Tea Rooms vastly outpacing the safer fare at Cafe Dido. For a quick lunchtime bite, you could do a lot worse than a veggie burger and chips at Oi Potato, or coffee and a snack at St Martin's (the latter is probably best avoided on a Bank Holiday Monday afternoon, when they were running out of food options in the time it took you to get to the front of the queue). In the evenings, the old schoolhouse restaurant 1573 schoolhouse provides decent gastronosh in old-timey surroundings - but the best meal you'll probably have in Leicester is at Bobby's, one of a number of Indian restaurants along what they call The Golden Mile. Allow plenty of time to get there - Google Maps gave us a pedestrian route that at one point assumed we could walk on water - and be prepared for some lovely veggie dishes, including a ridiculously spicy paneer tikka masala. If you're looking for some nibbles to take back home at the end of all that, you could do worse than picking up some local cheeses from Deli In The Square.

In terms of tourist attractions, Leicester's biggest one was pulled out of a carpark a few years ago. The Richard III Centre has three stories to tell, and it narrates them brilliantly - the original story of the deformed king, the myth that's grown out of his portrayal in popular culture, and the quest to locate and identify his body. The tagline for the centre sums it up beautifully: "the last king to die on the field of battle, and the first to be DNA tested." History, art and science all come together in perfect proportions. By comparison, the National Space Centre - despite having even more spectacular material to present - is a bit of a disappointment: it's poorly structured, with no obvious navigation path to take. The planetarium is impressive enough, though, especially when we come back later in the day to see a couple of scientifically dubious films projected across its screen (the 1956 and 1978 versions of Invasion Of The Body Snatchers). Just next door to that is the easily-missed Abbey Pumping Station, which turns out to be a small science museum with oodles of charm in its layout, taking in everything from the massive pump engines of the original station to a delightfully euphemistic history of sewage disposal.

All this and a BrewDog bar - and it's pleasing to report that one year into its life, it seems to be a solid part of the Leicester nightlife circuit. To the extent that during our late night visits, we spot several people coming in off the street, nipping in to use the toilets, and then leaving immediately after that. That's the risk you run when you have two entrance doors but only one bouncer, I guess. Hey, piss bandits, try the beer, it's better than you think.