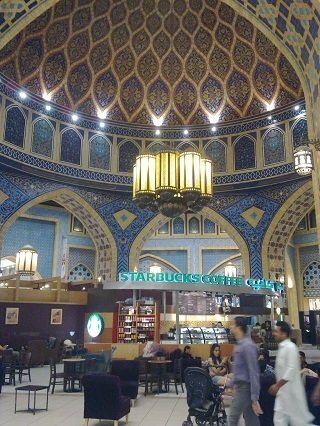 Let’s work from left to right across the Dubai Metro map, starting at Ibn Battuta station, which inevitably leads you to Ibn Battuta Mall. Unlike the other malls I’m going to be discussing here, everything is located at one single sprawling level, which makes it an absolute cow to navigate. But the main feature you’ll notice initially is the design. Ibn Battuta was a legendary explorer, and the mall is subdivided into themed areas decorated in the style of some of the places he visited: Egypt, India, China, Andalusia, Persia and Tunisia. This page gives you a feel for the sensational styling you’ll discover as you move between countries: a mechanical elephant clock in India, the world’s most over-decorated Starbucks in Persia (see picture above), or a full-sized Chinese junk moored close to the cinema. To be honest, I love this mall for its look rather than for the shops in it: they're all selling high-end fashion or luxury goods, so the only things that really appeal to me personally are the cinema and the restaurants.

The cinema is a multiplex run by Novo Cinemas, whose pieceofcrap website won’t let you link directly to the Ibn Batutta cinema listings. It’s a perfectly standard modern multi-screen theatre: my main disappointment with it is that a couple of years ago, it had a ridiculously oversized LED board that listed the screening times of every single film being shown (you can see it here), but that’s now been turned off. In terms of places to eat, a few I’ve tried over the years include Zaatar w Zeit (a Middle Eastern chain with a nice line in flatbread dishes) and Flippin’ Pizza (a deeply unfashionable attempt at recreating a New York-style pizzeria, when everyone’s all about the Neapolitan nowadays).

Ibn Batutta Mall has recently, somehow, had an extension built onto it, and the same applies for the next mall down the Metro track. Mall of the Emirates is more the sort of thing you’d expect from a Middle Eastern shopping centre – a multi-storey structure of chrome and glass, with all the big names in residence. As such, it’s a little more anonymous than the others I discuss here, but it’s the closest one to the Dubai Internet City district where I spend my daytime hours, so it’s probably the one I’m most familiar with. My main port of call here is, surprisingly, the Virgin Megastore. You tend to find that brands which shrivelled up and died back home still live on years later in this part of the world: and although Middle Eastern Megastores have a lot more floorspace dedicated to spin-off merchandise and electronics, they still stock a decent selection of CDs and DVDs from all over the planet.

The Vox cinema inside the Mall has actually relocated in the last year. There is no other country in the world where you could have a train of thought that runs like this – “I couldn’t find the cinema because it used to be next to the indoor ski slope, but now it’s been moved to on top of it.” As part of the move of the cinema into the new extension, it now includes its own fine dining experience, ThEATre by Rhodes. It seems to be the same at-seat dining idea that Odeon have been doing at their Whiteleys branch in London, just with a celebrity chef attached and a subsequent extortionate markup – you’ll pay £35 for a film ticket, and then food is extra on top of that. Even though this is precisely the sort of pricing you’d come to expect from Dubai, rumour has it (or more accurately, Popbitch has it) that it’s not going down well at all.

I have to run all my meals through an expenses department, so I didn’t get to try ThEATre out for myself. This time round, in fact, I ate at a restaurant literally next door to the site of the Vox cinema. 800 Degrees – actually, the logo has it as 800° Degrees, so it’s really 800 Degrees Degrees – is one of a rash of Neapolitan pizza joints that’s opened in Dubai recently, and is okay at what it does. Other places to look out for include the Dubai branch of legendary Indian chain Ashas, decent value Iranian food at Pars, and the ubiquitous Shake Shack, of which more later.

Further down the Metro line takes you to the big one: Dubai Mall, which doesn’t require any extensions building onto it because it already occupies most of the land mass of the UAE. This is the one that people always think of as the stereotypical example of one of these things, with ridiculous decorative curlicues like its indoor waterfall. It’s the mall that’s the most awkward to get at from the Metro system – it’s got better over the last couple of years thanks to the construction of a dedicated walkway, but you’ve still got to walk about a mile from the train to get to anything resembling a shop. There's another Virgin Megastore to be explored here, but for me the most interesting shop is Book World, a huge English-language bookstore unexpectedly run by the Japanese chain Kinokunya. Other English bookstores are available - again, Borders is another dead brand which still flourishes here - but many of them seem to be overloaded with children's literature and the adult colouring books that blight our own shops. Book World is the place to go if you want your books to have lots of words in them.

Your cinema in Dubai Mall is a Reel Cinemas multiplex, a 22 screen monster spread across several floors. As with all the cinemas I’ve discussed here, the biggest screens tend to be allocated to the American blockbuster movies – the Arabic language films I tend to come here for are usually shunted off to the smallest screens on the top floor. I’ve been in those screens four times so far this year, and every time they've preceded the movie programme with the same few tracks from the last Justin Bieber album, which seems to say something disturbing about the audience for Arabic language cinema. Still, they’ve kept Dhay Fe Abu Dhabi running in a central Dubai location for about two months now, so fair play to them.

Dubai Mall is probably the best one for varied food options, especially if you’re eating before a film. There’s a food court close by if you’re not especially fussy, with options ranging from chain takeaways (Charley’s) to proper sitdowns (Soy). There are also plenty of proper restaurants scattered throughout the mall, like the decent Persian of The Orchestra and the superior Naples pizza stylings of Pi. But I’m ashamed to say that a lot of the time I’ll end up at Shake Shack, scoffing on bacon burgers where the traditional pork bacon has been replaced by veal bacon to delicious (if morally dubious) effect. I still haven’t tried a Shake Shack back home: I suspect that real bacon will prove to be a serious disappointment.

So there you go – a handy roundup of Dubai’s mall culture, just in time for Ramadan. Other malls are available, but generally they aren’t as good (yeah, Dubai Marina Mall, looking at you) or I just haven’t got around to them yet. Maybe next time?