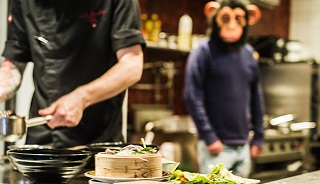 In the meantime, your Simian Substitute Site for June 2016 is Restaurang Hello Monkey. Two restauranger, in fact, located in separate districts of Göteborg in Sweden: one is on Magasinsgatan, the other on Linnégatan. Both of them offer what they call 'urban jungle food and drinks', all falling into the broad category of pan-Asian fusion, with sashimi and dim sum happily sitting side by side on the menu. Pretty much all of the site is in Swedish, but you should be able to recognise the dishes from their names, and you can book online if you fancy trying the place out for yourself.

Coming this month: more BrewDogging, more MostlyFilm, possibly a record review, and eventually some sort of explanation as to why this restaurant is this month's Simian Site. Drop me a comment below if you think you've worked it out.