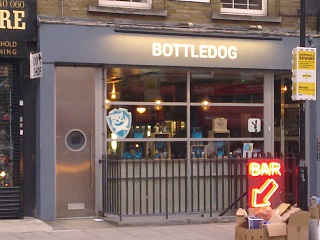 After all the thrills and glamour of the recent five city Nordic Expedition, I'm afraid that this next BrewDog bar writeup is going to be a lot less cosmopolitan. If it's any consolation, though, it'll be a lot more confusing.

It all started over two years ago, in April 2014, when BrewDog opened up their first offlicence in a slightly hard-to-reach part of London. (They claim it's King's Cross, but Londoners know better.) BottleDog was - and still is - a shop for takeaway beers curated to the same degree as the ones you can buy in BrewDog bars, so you get a mixture of classics from the brewery's own range and fine guest beers by fellow craft brewers from all over the world. And you can buy them cheaper than if you attempted to purchase them at a bar. It's a win-win, really.

BottleDog was heralded as the start of a new concept, a separate chain of shops running as a complement to the bars. This is why I've never felt the need to talk about it as part of the BrewDogging project - it's a shop, not a bar. Except here's where it starts getting confusing.

BottleDog, on the occasions when The Belated Birthday Girl and I visit it, always seems to be doing just fine. It's got a good selection of beers, and also runs occasional events as an attempt to build a bit of a craft beer community around the place: a few months ago, The BBG had a very nice time at a tasting session looking at how ageing affects the taste of different types of beer. (To me, that sounds like a cynical excuse for a shop to sell you beer that's past its drink-by date in the dubious name of Science, but she insists it was a lot more than that.) Anyway: as far as we can see it's a successful shop, and bodes well for future branches.

A year and a half later, the second BottleDog was opened in Edinburgh. As they say in Spinal Tap: don't look for it, it's not there any more. Within six months the shop had shut down again with virtually no warning, leading to some awkward questions at the subsequent AGM. The response from James Watt is that he's found that BottleDogs work better when they're attached to an existing bar. And you can see his point: DogHouse, Castlegate and Leicester have all made a decent fist of combining off sales with their usual activities. The company line is that from this point onwards, all subsequent BottleDog branches will be integrated with a bar.

This left the original BottleDog as a bit of an anomaly: or at least, it did until June 2016, when they opened up a bar in its basement. The space underneath BottleDog King's Cross (yeah, whatever) used to be where BrewDog had their London offices, but it's now been fitted out with a small collection of benches and has a tiny bar installed at one end. You can either access the bar from inside the shop, or directly from the street via a flight of steps: the latter approach gives it the feel of a secret dive bar, and you almost expect the punters to yell "Norm!" when you walk in.

The bar itself is so small, they can only have five beers on tap - the BrewDog core range of old favourites like Punk and Dead Pony, effectively. But really, nobody's going to come here to drink draught beer, unless it's as an opener for something more ambitious: the whole point of BottleDog is that you have an entire room of bottles of interesting beer directly above you, and they're all available to be drunk on the premises. And there are some glorious surprises if you dig hard enough into the shelves: on the night in early July when The BBG and I tried out the place for ourselves, the highlight for me was a limited edition of one of my favourite beers - Pressure Drop's Wu Gang Chops The Tree, normally made with foraged herbs, but this time enlivened with Essex-grown kaffir lime leaves.

That night, The BBG and I were visiting for a specific event: the launch of a pair of massively-hyped beers from Manchester superstars Cloudwater. BottleDog had laid their hands on a measly dozen bottles each of DIPA v4 and DIPA v5, Cloudwater's latest attempts at road-testing their Double IPA. The idea was that both of these beers were slightly different prototypes, and our feedback would determine how v6 works out - more like v4 (dry hopped before fermentation), more like v5 (dry hopped after fermentation), or some sort of combination of the two? The lucky dozen of us who made it in first got a bottle of each to try both separately and blended. For my money, neither of them really feels like a complete beer in its own right, and they both lack something when compared against the stunning DIPA v3 we had at this year's BrewDog AGM: mixed in a 50/50 ratio, they're a bit more acceptable.

I appreciate that the night we were visiting BottleDog, it wasn't a typical crowd, and was more heavily skewed towards total beer geeks. (Hi, Emma.) But there's no denying that this tiny little bar has a rather delightful atmosphere all of its own, enhanced by a pitch-perfect selection of new wave classics on the sound system, which made me wonder all over again how I've got through 39 years without ever owning my own copy of Marquee Moon. There's no food on offer - if you need something to soak up the beer, we'd point you in the direction of lovely Italian Luce e Limoni, just-hipster-enough Honest Burgers, or all the other places on Gray's Inn Road that don't have websites. But as a bar, it does the job rather well, and based on how it looked in early July I'd definitely recommend it.

Except that since our visit, it's apparently changed again. BottleDog say they've been having problems with the taps on the pop-up bar - and is it just me, or should I be nervous that nobody's ever used the words 'pop-up' until some time after it opened? - and have taken them out again while they look for a more permanent solution. The bar's still running, but it's currently bottle-only - and as the bottle range is the best thing about it, I don't see that being a problem. But I think we need to keep an eye on BottleDog while it's working out what it really is.