Oh, don't look so surprised, you should have expected this might happen. After all, there's a precedent. For those of you who are only here for the Edinburgh stuff, I should point out that BrewDogging is a regular feature on this site which is attempting to review every single BrewDog bar in the world. Back in 2013, when it was actually possible to do that within a single year, The Belated Birthday Girl and I quickly realised that the best time to visit the Glasgow bar was while we were in Edinburgh. So on the final day of our Festival visit, we terminated our showgoing to travel to Glasgow, grab lunch and a couple of beers at the Kelvingrove bar, catch a couple of bits of local art, and make our own way back to London from there while Spank's Pals got the Edinburgh train instead.

This year, it's going to be a similar deal, except Stirling instead of Glasgow, and we're getting the train back with the Pals rather than leaving them to their own devices. So the bad news is, don't expect any more Edinburgh reviews from us this year, at least until the Pals provide their own highlights and lowlights in the Postscript that should be up here in a week or two. But the good news is, you get to hear about all the fun you can have in Stirling when you've only got three hours to play with.

Yes, that's right, three hours. Regulars will know that the final morning of an Edinburgh week is a manic affair, as we struggle to strip all the bedding and empty all the bins in our flats in advance of a 10am deadline. Happily, because all the attendees this year have been through this process before, there are no nasty surprises, and by 10.20 all of us are at Waverley station sorting out our plans for the rest of the day. For many of the Pals, this involves dropping their bags off at left luggage and squeezing in a final Fringe show or two. For myself and The BBG, though, we're on the first train out to Stirling, arriving there at around half eleven. The problem is, we need to be heading back to Edinburgh by around 2.30 if we want to comfortably reunite with the Pals for the train back to London.

Obviously, this limits our options a tad: our initial research finds plenty of things to do in Stirling, but very few of them can be combined with a pub visit in a three hour timeslot. For example, the obvious suggestion everyone makes to us is Stirling Castle, which certainly looks lovely but recommends on their own website that "you allow at least 2 hours to see all the castle highlights and to get the most out of your visit," so that's not going to work. We also discover, to our frustration, that we've chosen to go to Stirling on the day of the Stirling Highland Games. It's not just irritating that we don't have enough time in town to make it worth our while going there: it's also the worry that the Edinburgh-Stirling train will be totally full of men in kilts carrying cabers. Surprisingly, though, this is not the case.

Happily, though, there's one landmark in Stirling's charming Old Town that can be covered in a flying visit, and it's the gloriously-named Church Of The Holy Rude. Apart from the childish enjoyment I get from its name, it also leaves me with a pleasing Shane MacGowan earworm for most of the rest of the day. But put that aside, and it's a fascinating bit of Scottish history in its own right: a medieval church so divided by the Reformation that at one stage it literally had a wall down the middle to separate rival congregations from each other. These days, such religious differences are ancient history: or are they? It's the sort of friendly church where they put out paper and crayons for the kids, and one disturbing child has left bits of paper lying around on the pews with '666' and pentagram symbols drawn on them. Still, the architecture is impressive, including some magnificent stained glass work. Next door to the church you can also see Cowane's Hospital, featuring the statue of its founder that's affectionately known as Auld Staneybreeks. Whether this is because his trousers are made of stone, or because they're permanently soiled, is left frustratingly unclear. 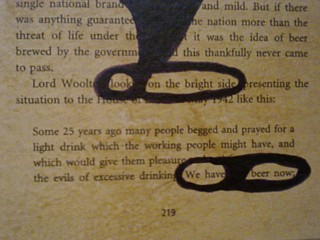 But let's be honest here - the main reason why we're visiting the Church at all is because our train got in at 11.30am, and Brewdog Stirling doesn't open till noon. Situated roughly on the dividing line between the Old Town and the New Town, the bar itself is quite a large room, but mostly segmented into booths: it has the useful effect of making the place feel intimate, even when (as is the case today) the number of people drinking in it never gets above double figures. Possibly because of the low numbers in attendance, the bar staff are frequently popping around the tables to chat to all of us, which is a rather nice touch.

It's always worth noting the things that make a particular BrewDog bar stand out from the others, and there are a few worth mentioning in Stirling. For a start, the music playlist (at least on this Saturday lunchtime) is a fine collection of soul classics, reminiscent of the surprise I got on our first visit to the Gothenburg bar. The other feature of note is the decor in the toilets. Many of the older BrewDog bars have plastered their khazi walls with comic book pages or album covers, while a lot of the more recent ones have tended to dial those sorts of idiosyncrasies back. Not Stirling, though, even though it's only been open since November last year. Their wallpaper of choice is a series of pages from Pete Brown's history of beer and its consumption, Man Walks Into A Pub. This would be an astonishing enough decision on its own, but what they've also done is deface these pages with marker pen to highlight particular words in order to create entirely new sentences out of them, very much in the fashion of Tom Phillips' book A Humument. (I wonder if that's a comparison the bar staff hear a lot?) When people go into a pub toilet and take far too long to come out of it, you tend to assume the worst, but in this case there's no shame in spending an extra few minutes after your wee, marveling at what they've done.

I haven't said anything about the beer. Let's talk about the beer. Our opening round takes in a couple of newish beers - I have a pint of the latest in BrewDog's hop-specific series of session IPAs, Ace Of Citra, while The BBG goes for a can of American brewery Stone's Go To IPA. The latter is a beer that's been around for a while, the key difference being that Stone are now brewing it and canning it in their new Berlin facility. As the barman points out, any Stone beer we've drunk in the UK before now has had to make a Transatlantic journey before we get it, meaning that it's usually close to its drink-by date. These new cans from Berlin, however, are less than four weeks old, resulting in a much fresher beer at our end. Both of these go down very nicely, and a small glass of the newly-recreated Hello My Name Is Ingrid makes for a good follow-up.

There's one final thing that makes BrewDog Stirling a worthy candidate for the - gulp - fortieth BrewDog bar we've visited, though, and that's the food. Like many of the bars that don't have a full kitchen, the main focus of their menu is on reheatable Pieminster pies. But unlike many of those bars, they also do toasties. I go for a meaty one (smoked bacon rashers & blue monday cheese with fig jam) while The BBG goes for a cheesy one (Winterdale cheddar, Ogleshield, red onion, leek and garlic), both accompanied with sweet potato fries and a wee salad. They prove absolutely perfect for a beer-accompanied lunch. As The BBG keeps insisting, maybe there are valid economic reasons to try and make all the bars serve the same types of food, but the interesting stuff is happening when bars deviate from those standard menus. Long may Stirling continue to do so. 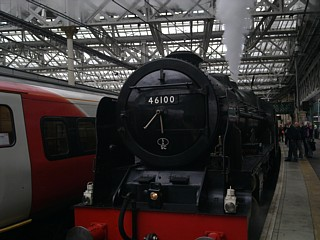 Sticking rigidly to our timetable, we're back on the platform at Stirling station for half past two, where the information boards are warning us that steam trains will be on the line between Stirling and Edinburgh today. Say what now? I do a quick bit of research on my phone, and it turns out that ScotRail run a series of special steam services during the summer months. The scheduled run, it turns out, wouldn't have been any use to us today - it does a round trip to and from Waverley via the Forth Bridge and Stirling, with no opportunities to jump off quickly for two beers and a toastie. But there's a secret charter service that's leaving Edinburgh at 4.15, and we just have enough time before our own train leaves to run over to the platform, take a few pictures, and giggle a bit when it blows its whistle.

Our Virgin Trains East Coast service back to London is somewhat dull by comparison. Okay, maybe its wi-fi is better than a steam train would have (it's thanks to that wi-fi that Friday's diary was posted in something approaching reasonable time), but I bet that the toilet on the Royal Scot didn't have a permanent blockage and a missing seat. (Still, I guess that distracts you from the smell.) Our arrival ends up being over 20 minutes later than scheduled, but at least we arrive, and we're all back home now.

2016 feels like a pretty good Festival to me, overall. With the exception of the accumulated disappointments that occurred during what might be PBH's final year of Peter Buckley Hill And Some Comedians, we've seen lots of very good stuff, and a couple of flat-out classic shows. For my money, The Castle Builder and Dumb White Guy With Brendon Burns are inseparable as joint highlights of the year, for entirely different reasons: one's a playful handmade celebration of the creative impulse, the other a comic shout of rage against a political situation that's not the political situation everyone else has been shouting about. Does anyone else agree with me? Find out in a week or two, when I post up Spank's Pals Postscript and they tell you themselves what they liked or didn't like. For now, I think I need a quiet lie down away from art for a bit. Being a monkey, and all.