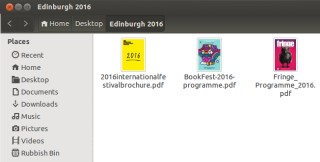 I dunno, I thought that a paperless Edinburgh Festival would be a lot more glamorous than this.

Two years on, one year off: that's how the Edinburgh Festival has been for me since I started doing daily coverage of it on here in 1998. Two consecutive annual binges on the International, Fringe and Book Festivals, followed by one year's rest to take it all in and stop it feeling a bit samey. As we commence this cycle again for the seventh time in a row, this is normally the point where I try to come up with an overview of what the trends are.

To be honest, it's hard to say. Looking at last year's coverage - my high-level skim of the 2015 programmes, followed by Nick and co's reviews of what they saw - it looks like it was a great year for theatre (though that might just be Diane skewing the averages), and a not-so-great one for comedy. Certainly, the role of the Fringe in the building of a comedy career seems to have changed completely in the last decade: the days where a comic would hone a set around the country for a year and then bring it to Edinburgh as a showcase are long gone. Last year's trend of comics working in the opposite direction (trying out unfinished material at the Fringe before taking it on tour) is still a thing, but also there are lots of stand-ups just not bothering coming here at all. Right now in London, the Camden Fringe is running a huge number of comedy shows by acts who were Edinburgh stalwarts just a couple of years ago. People have always said that the heavy focus on comedy is part of what's turned the Fringe into the commercial nightmare it is today: maybe things are changing back.

Meanwhile, having missed his debut last year, I finally get to see what an International Festival run by Fergus Linehan looks like. Certainly a few of the changes he made in 2015 seem to still be in place, most notably the spectacular diversity of the music programme. (It's hard to imagine two concerts more different than the pair which The Belated Birthday Girl and I have already booked for. Maybe you can try to guess what they are.) I'm reserving judgment on the Book Festival for the moment, mainly because booking for it opened while we were on our Nordic Expedition and all the good stuff had sold out by the time we'd got home. But I'd imagine we'll try to catch something there during our week in town.

On the subject of pre-booking, it's always been a bit of a dilemma - how much do you lock down your week in advance, and how much do you leave to gut reactions to word on the street? I think that The BBG and I have an odd mixture this year: we seem to have panicked because of the year off, and already booked at least one theoretically unmissable thing per day, but at the time of writing we have no idea what sort of things we should be seeing in the gaps in between them. Still, that's why you pay attention to what other people are seeing when you're up in Edinburgh.

That includes Spank's Pals, of course. Your team for the week is entirely made up of old hands who've done all this before: Alan, Anne, The BBG, Charmian, Diane, Eve, Nick, Rhian, Stephen, Tomas and yours truly. As ever, I'll be attempting to post up daily reviews of all the stuff I've seen, and the rest of them will be throwing in their own reviews whenever it feels appropriate. It's two years since I last did this, but the knack always seems to come back quickly after the break, and hopefully that'll be the case this year too. Watch this space.