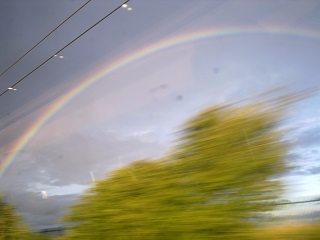 As sure as night follows day, my diary of the 2016 Edinburgh Festival is followed by half a dozen short pieces from some of my Pals, with their own opinions about what was good or otherwise. Here are the first three: the rest should be following imminently (well, here, actually). 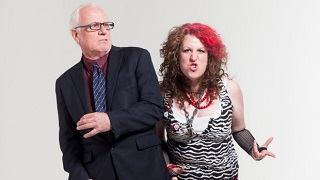 What a treat we had this year, possibly the sunniest Edinburgh in the entire 69 year history of the festival (bit of a clue there to what’s happening next year and why we need to book the student accommodation ASAP), but let’s get some old chestnuts out of the way first. Rory Bremner did an excellent (garlic bread free) first night show, which included the rather good joke about how Iceland beat us twice in a week, once in the Euros and twice by the Brexiters who shop at Iceland. Annoyingly, I am also going to have to give the Reduced Shakespeare Company a plug here. Their Shakespeare’s Long Lost First Play was nothing but a dirty rotten trick (fair play in Edinburgh, I guess, to get audiences to see their Complete Works show for the umpteenth time!), but did include this rather pleasing line from Macbeth: “I got 99 problems, but the witch ain’t one.” Not technically correct of course (there are three of them), but like Spank’s audience for the Young Fathers gig at the Hub, it did make those of us under 60 feel cutting edge.

My funniest show at the Fringe this year must go to Bron Batten’s Sweet Child Of Mine. Australia’s answer to Bryony Kimmings (who I discovered back in 2013 doing a show with her nine-year-old niece called Credible Likeable Superstar Role Model in a tiny venue, and is now starring in her own show at the NT), Bron is a very talented jazz ballet dancer. She opened and closed her show with two very enjoyable dance routines, but was soon supping from a can of Fosters and generally having fun with all sorts of Australian stereotypes, including her mother and father. The latter should have been in the show (a la Kimmings), but decided against getting involved in some fairly frank and emotional exchanges with his daughter for the 3 weeks of the fest, and who can blame him? It did give work to an unemployed Irish character actor, who smiled gratuitously throughout the show and told terrible dad jokes while Bron was off stage dressing up as an aborted chicken, which she had previously performed at an empty swimming baths somewhere in Australia. The true spirit of the fringe is not dead, but is helped by the Edinburgh/Adelaide exchange programme, otherwise we would never have seen this entertaining show.

I’m only too aware I’ll be trying the patience of our fave monkey if I carry on much longer, so better leap to a restaurant review. Ondine: don’t go. I have a huge bugbear with places like these, which have tomb like wine lists but are too mean to employ a sommelier to guide you through the choices. You are left at the mercy of the food waiter, in our case a clueless Spanish chap who seemed only to be going through the motions (probably a temp taken on during festival time). That’s how we arrived at a Cab Sauv dominated Claret that was lip smackingly tannic, way too young (2012) to serve, and completely ruined my meal. I should have complained to the manager, but you can’t always do that in social situations: won’t be going back, it was very average. Beer of the week must go to Stewarts 80/- (or heavy to the Scots) which was available in all the big venues, and delicious lunchtime and evening drinking. 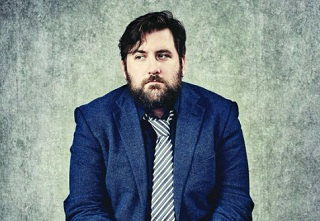 When I can't find the queue for a show, a distinctive sinking feeling sets in. Oh bugger... what if I am the queue? I experienced this when lining up for Garrett Millerick's standup show, entitled The Dreams Stuff Is Made Of. The audience headcount eventually reached 9 - but that was partly down to some Fringe staffers who wandered in to fill seats.

The show was themed around the idea of failing miserably in pursuit of your dreams. Millerick explained that he was once a dreamer, a hopeless optimist... possibly due to an error of his schoolteachers, who taught him that he could grow up to become anything. (When it would've been more accurate to say that he could grow up and become something.)

Considering the theme and the circumstances of the evening, I was expecting a huge slice of pessimism. Happily, that wasn't the case. Millerick is clearly an inborn optimist - which, he points out, might explain why he's doing stand-up in front of nine people in the Pleasance 10 Dome.

The set was built around a selection of stories which charted Millerick's lifelong quest to become a film director. He had planned to acheive this goal in several steps: firstly, become a facsimile of Louis Theroux. Secondly, win a load of awards. Then make it up from there. Things obviously didn't go to plan. But the inevitability of the conclusion didn't matter, because this story was a delight to listen to. Millerick performed with effortless enthusiasm to our tiny audience. The show was fast-paced and polished, but maintained a relaxed atmosphere. It felt rather like hearing a world-class anecdote from a friend who happens to be a gifted storyteller.

I particularly enjoyed his skill for pinpointing ironies and symbolism in the details. At a climactic point in the tale, a full-on existential crisis is triggered by a decorative object spotted in a TGI Friday's, and the moment was so wonderfully described that I believed every word of it. I left confused: why wasn't Mr Millerick performing to a full house? It's enough to make a pessimist out of anyone.

Another standout show I saw during the week was a two-man play named Dublin Oldschool. Unlike Millerick, this had clearly been noticed and was being bombarded with glowing reviews - and it wasn't hard to see why. It's a dark comedy/drama about two brothers living within Dublin's underground rave culture. The dialogue uses authentic lingo, and it's delivered in giddyingly fast verse - part rap, part poetry. The writing was incredibly smart, but there was barely time to consider this as the performers rocketed through.

The play describes a three-day bender taking place across Dublin. During this drug-fuelled chaos, two estranged brothers are reunited, and they're forced to contemplate the paths they've taken. The speed of delivery kept me on the edge of my seat, trying to catch every word - and that made the occasional pace-changes highly effective. The two performers were capable of subtle, naturalistic acting as well as windtunnel intensity, and the brothers' awkward reunion felt entirely convincing.

In addition to this small-scale story, the play conjures a panoramic vision of the surrounding subculture. Rave nomads, travelling endlessly in search of the next session. Music cargo-cults, waiting in distant warehouses for the crowds to arrive. Opportunists flocking to disputed sites, which have for whatever reason ended up in 'the hinterland of ownership'. In this world, the distinction between day and night is irrelevant. While the scenario is obviously grim, the play manages to put us in an insider's shoes. We share the thrill of the hunt for the next 'session'. It's all so much fun - why not keep going? Disaster obviously looms, but the music hasn't stopped yet. 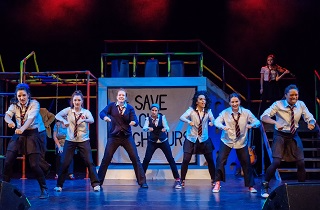 I enjoyed most of the shows that I attended in Edinburgh this year, but will concentrate on the four that really stood out for me.

My highlight this year was the musical Glasgow Girls (Assembly Hall). The story is based on actual events that took place in 2005: a pupil of Kosovan origin at Drumchapel High School in Glasgow, together with her family, were taken to a detention centre to await deportation following a dawn raid. Her schoolfriends (the Glasgow Girls of the title) campaigned for her (and other similarly threatened asylum-seekers) using petitions, radio and television appearances, and ultimately the then First Minister of Scotland became involved. The musical numbers were not especially memorable, but the show was performed with tremendous energy and verve by the talented cast, with humour, music and dance acting as a counterpoint to (but without detracting from) the important issues that were raised in the course of the story. I found it extremely moving.

My opening night event was J S Bach’s St Matthew Passion (International Festival), which was performed at the Usher Hall by the English Baroque Soloists and Monteverdi Choir (together with the NYCoS National Girls Choir) conducted by John Eliot Gardiner. I had not heard it performed for over 35 years, having found it rather intimidating (partly because of its length – about 2 hours 50 minutes). On this occasion, I really enjoyed the performance of this sombre but uplifting work. The orchestra played beautifully and the soloists (drawn from the choir, except for those singing the parts of the Evangelist and Jesus – James Gilchrist and Stephen Loges respectively) were excellent, but it was the wonderful choir that was the heart of this performance.

J S Bach’s music was also featured in the other classical concert that I attended in Edinburgh, a Fringe concert by the Bach Ensemble of Edinburgh at Canongate Kirk. This time it was the much more lightweight Orchestral Suite No 4, which nevertheless provided a suitably rousing finish to the evening. However, the highlight was the superb performance of Handel’s motet Silete venti by young soprano Electra Lochhead (following on from her equally fine rendering of Bach’s cantata Jauchzet Gott in Allen Landen in a 2015 Fringe concert by the same group). Other works in the concert by this fine group of local musicians were concertos for one, two and four violins by Vivaldi. It was commendable that this well-planned programme featured lesser known works by the three featured composers (rather than, for example, the more obvious Four Seasons by Vivaldi).

Another really enjoyable event was Pilgrimer at the Book Festival. Pilgrimer is a re-imagining of Joni Mitchell’s 1976 album Hejira (a collection of songs of travel inspired by several trips that Joni made across North America) by Scots writer James Robertson, with new lyrics in Scots dialect with a Scots setting. (Pie Jock’s Visit tae the Mune is perhaps the most striking song title.) The nine rewritten songs (with musical direction by siblings Karine Polwart and Steven Polwart) were performed as part of a much-praised concert in January this year at the Celtic Connections festival in Glasgow.

The Book Festival event featured Robertson and the two Polwarts, as well as folk singer Rod Patterson and Celtic Connections’ curator Donald Shaw. The discussion about how Joni Mitchell’s music and lyrics were re-imagined for 21st century Scotland was fascinating, although it was the performance of eight of the nine songs that made the evening special. All the above-mentioned took part in the performance, but it was the wonderful soaring vocals of Karine Polwart that did it for me.

Finally, I would like to thank Spank for organising another enjoyable visit to Edinburgh, and the whole group for their great company.