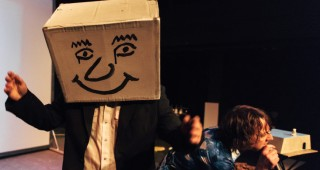 Kid Carpet has a bit of a think. "Well, it was probably something like this," he says, pushing a button on a keyboard and launching into his first single, Special. Suddenly I'm struck with the horrified realisation that we've been fans of Kid Carpet for 12 years. When we first saw him in a support slot and were amused by his wit and inventiveness, we had no idea where that would lead. Certainly we wouldn't have expected him to be co-creating a show on the Edinburgh Fringe in 2016: particularly one in Summerhall, the most spectacularly pretentious of all the Fringe venues. (To get to the room where the Kid's show is happening, you have to walk down a corridor showing an exhibition called A Lady's Not A Gent's, an alternative history of Duchamp's urinal that may or may not be a spectacularly elaborate joke.)

In 2004, the Kid was just starting to release music. In the same year, his co-conspirator on The Castle Builder, Vic Llewellyn, was putting together a theatre piece that would ultimately make it out as far as Norway. While there, Llewellyn became obsessed with a fanciful castle he spotted, one with a story behind it: a story that could perhaps be the basis for his next theatre piece. He googled the words 'castle builder' -"because that's how you write a show, obviously" - only to accidentally discover the work of Jim Bishop, an American who's been building his own 160 foot high castle by hand for several decades. Suddenly, the focus of Llewellyn's show changed a bit.

In the baldest terms possible, The Castle Builder is about outsider art: Llewellyn tells the stories of several people who've dedicated their lives to making castles and other monumental structures, and Kid Carpet performs songs about them. But its appeal is actually a lot broader than that: it's about the creative desire, and how it affects people who can only make things with the stuff that they have to hand. In a way, this duo are the perfect pair to be telling these stories: Llewellyn makes theatre props out of cardboard boxes and chewed-up bits of bread, while Carpet makes pop songs out of leftover bits of the bandstand music from Trumpton. The dividing line between 'outsider' and 'normal' art is a lot thinner than you might think.

The tone of this slightly ramshackle show is what sets it apart from the rest - it's hand-crafted in the same way as the art they celebrate, it's utterly non-judgmental, and best of all magnificently playful. The combination of Llewellyn's storytelling, Carpet's music (including a few tracks from latest album Dogmeat) and a series of low-budget visual surprises makes their show a total one-off, and one that you really should see if you get the chance. One word of warning - switch your phone to silent rather than off when the show starts, so you don't miss out on one of the sweetest bits of audience participation you'll see this Fringe. 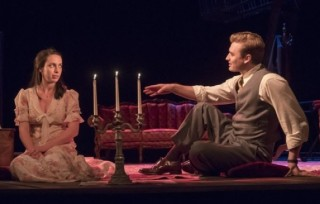 We've still got a few days to go, but I think our best celebrity spotting experience of the Festival has already happened - late on Monday night, walking past the King's Theatre when The Glass Menagerie is playing, and seeing its star Cherry Jones having a quick drink outside the pub next door. Two days later, we get to see her on stage as well. Thanks to late booking, all of our International Festival events this year have involved us having to sit in seats near the roof of the building: but that works really well for this performance, as we get a couple of great places in the front row of the upper circle.

The Glass Menagerie isn't a Tennessee Williams play that I know, at least not as a play: my only experience of it was seeing the 1987 movie directed by Paul Newman. Even then, there's very little about the movie I remember now: I can recall its fascinatingly dreamlike trailer (not on YouTube, sadly), and the way the phrase 'gentleman caller' is repeated so many times that it ends up lodging in your head like a Taylor Swift chorus. Apart from that, nothing - I couldn't have even told you who was in it. Until the lights go down on this production, Michael Esper starts his opening narration, and I suddenly hear all of his words in the voice of John Malkovich from the film. Thankfully, that stops after the opening scene, as Esper makes the role his own.

As Esper's character Tom tells us in that opening, this is a memory play: this is him recalling the events that led him to where he is today, which means that everything's a bit hazy and uncertain. John Tiffany's direction achieves that magnificently, combining multiple elements that weave a dreamlike atmosphere on stage. Bob Crowley's set, a simple set of rooms with pockets of magic hiding inside: Steven Hogget's movement direction, turning a family dinner almost into a dance number: and Natasha Katz's non-naturalistic lighting, making things fade in and out of view in just the way that memory does.

Within this environment, the cast of four play their roles perfectly, with Esper the key to holding the levels of reality together. Cherry Jones' matriarch is obviously the biggest and showiest role of the four, keeping our sympathy even as she completely loses control of her children. But she never completely overshadows the others: and when we get to what's really the centrepiece of the play - a long candlelit conversation between daughter Laura (Kate O'Flynn) and her gentleman caller (Seth Numrich) - they pull off the best performances of all. We normally crack wise in these pages about how nothing good ever comes out of the King's Theatre (insert token reference to Die Ahnlichen here), but we have to make an exception this time.

Back in the Fringe and the world of standup comedy, Mary Lynn Rajskub is trying to have her cake and eat it - the intro to 24 Hours With Mary Lynn Rajskub is all about how unpronouncable her name is, but her posters have recently acquired the useful hashtag #ItsRiceCub to help people who want to actually ask for tickets. You know the name - though maybe not how to say it - from her several seasons playing computer whiz Chloe on 24. Her set touches briefly on what it's like to be part of an international hit TV show, but mostly it's about what happens after that when the show's no longer on the air. She talks about going back to her roots on the comedy circuit, dealing with fan disappointment over that decision, trying to reconnect with her husband and son, and seeking solace in exotic yoga instructors when that reconnection doesn't work.

It's odd, watching a standup set from someone who's more famous for something else. As the lights go down for Rajskub's show, I realise I have no real idea what her style of delivery might be like. It turns out to be unexpectedly slow and laid-back, almost down to Michael Redmond degrees of slowness. This isn't a problem, but the unoriginality of her insight into fame is: there are a few stretches in the set where it's largely observation with very few jokes. Also, as The Belated Birthday Girl notes, when the time comes for her to do a bit in character as Chloe, she seems to have completely forgotten how to play her. Still, there are some good gags scattered around here and there, and there's no denying her ability to construct a set, with setups and callbacks riddled throughout the hour. After - gulp - nearly 30 years on and off of coming to this Festival, there are certain things you get to learn, albeit things that nobody else will find in the least bit useful. For example, when you're skim-reading the Fringe programme, it's easy to spot the shows on at the Traverse - their listings are always twice the size of everyone else's, because their shows are on in different timeslots every day. Unless you're Daniel Kitson, who's somehow managed to block-book Mouse into a 10pm slot every night. (It's sold out for the entire run, so I guess we have to give it that.) All the other shows in the Traverse programme have to cope with moving around between a variety of slots, from just after breakfast to just before bedtime.

Matt Regan's Greater Belfast feels like it works best as a late night show, which is how we're seeing it. Certainly he seems to feel that way, cheekily remarking at one point that "waking up people who've fallen asleep is great craic". Over the course of an hour, Regan (accompanied by the Cairn String Quartet) looks at his home city of Belfast and what it means to him. Initially, the answer seems to be 'not much nowadays' - his main metaphor for the city is the 'sleech' that covers everything, and he insists that "everything that comes from where I come from is shite". Gradually, though, he finds reasons to love the place - from bands like the Undertones and Stiff Little Fingers who made a virtue of their accent, to the long tradition of linen-making symbolised by the factory workers they called The Millies.

Some reviews have suggested that Greater Belfast is like a Northern Irish equivalent of Under Milk Wood. And like Dylan Thomas' epic, you could argue that this is more a piece of audio than theatre - there's very little obvious staging going on, and all the important stuff is in the music and the words. And if you're happy to believe that, then there's a soundtrack album available on Bandcamp. But listening to it outside of a theatre context means you miss what's probably the most important part - the personality of Matt Regan himself. He's a delightful host for the evening, breaking off every so often to make sure that the audience is okay and still keeping up. His halting, repetitive delivery makes his poetry all the more compelling, and the string quartet backing complements it beautifully. For a long while, your main worry is that the show will be a series of disconnected vignettes rather than a coherent whole - but in the final minutes, a transcendent finale based around the song My Lagan Love ties it all together and sends you out into the night dazed and happy. So yes, buy the album, but see the show first.

Thanks for the kind words Spanky!