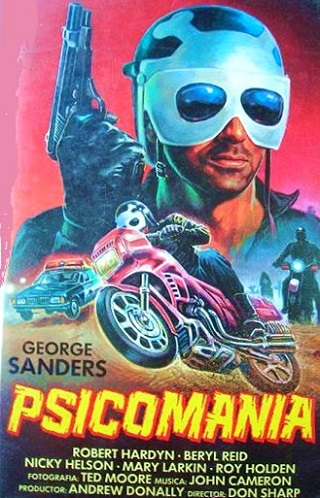 It's there in my bio at the end of every article I write for MostlyFilm: "his specialist subjects are Asian cinema, cult movies and TV, and watching foreign films without the benefit of subtitles." So far in 2016, I've written quite a bit that falls into the first and last of those categories, but nothing that really counts as culty.

Well, today that changes, with a review I've written of Psychomania, one of the cultiest of British movies. Ignore the ridiculously inaccurate poster image over on the left there: if you have a vague memory of an undead Nicky Henson misbehaving on a motorcycle while his devil-worshipping mother Beryl Reid tuts in the background, then you've probably already seen Psychomania in a late night telly slot and doubted the evidence of your own eyes. (Much like I did when I first saw it over three decades ago, as you'll see.)

Psychomania is currently doing a tiny tour of UK cinemas as part of the Scalarama festival, but the big news is that it's just about to come out in a lavishly restored Blu-ray/DVD set with tons of bonus features. And speaking of bonus features, I've assembled a wee YouTube playlist of related bits and bobs as backup material for the MostlyFilm article.

Here's what you can see on the playlist below: