I've been a long-time fan of what Criterion do with home video releases. I was saying as much back in March 2000, a time when apparently a list of ten randomish DVDs from my collection could be passed off as meaningful content. One of those DVDs was the Criterion release of Rushmore, and it allowed me to list the things I liked about their standards of film presentation. I didn't get to mention the one thing I didn't like, though: it was that Criterion only released discs in the US, so I had to deal with the hassle of ordering these already expensive editions from overseas, and then battling with HMRC's demands for import fees on top.

Jump forward to earlier this year, and the announcement that Criterion were setting up shop in the UK. Inevitably, Europe's Best Website was on the case immediately. From day one, MostlyFilm has been reviewing Criterion UK's releases as they hit the shelves, covering movies as diverse as Only Angels Have Wings, L'Avventura, Here Comes Mr Jordan, Dr Strangelove, The In-Laws and many more.

And now it's my turn, as I've just posted a review there of Criterion's restoration of The Samurai Trilogy, a single epic story told across three films released between 1954 and 1956. As usual, I'll be providing Red Button Bonus Content for the piece here, including trailers and posters for all three films, plus the opportunity to buy a couple of related books - the Eiji Yoshikawa novel the trilogy was based on (originally published as a daily newspaper serial over several years), and its real-life leading character's Samurai For Dummies manual, The Book Of Five Rings.

A quick warning before we go any further with this. Do you lament the modern trend for film trailers to give away virtually every major plot point, meaning that there's almost no need to see the movie after watching them? Well, it's not really a modern trend. These trailers for the three parts of the Samurai Trilogy - especially the second one - spoil virtually everything, including bits of the story I tried to keep schtum about in my original review. So if you haven't seen the trilogy yet, maybe watch these trailers but get blind drunk afterwards, or something.

With that caveat in mind, here's the trailer for Samurai I: Musashi Miyamoto, released in 1954. Sadly, there doesn't seem to be any evidence on YouTube of William Holden's rejigged version for the American market, although you can buy the original letters that sealed the distribution deal for ten grand US, apparently. 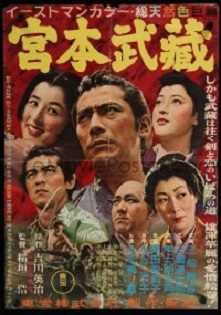 Next comes Samurai II: Duel At Ichijoji Temple, released in 1955. The film is teasingly ambiguous for much of its running time over whether Kojiro Sasaki is really a friend or a foe to Musashi. The trailer, though, doesn't really give a toss about ambiguity. 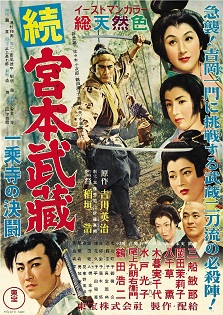 And we finish off with Samurai III: Duel At Ganryu Island from 1956, which climaxes with the one event in the entire trilogy that can be said with total certainty to have happened in real life. Maybe. (To do a bit of spoiling myself, I should warn you that the girl-on-girl axe fight teased here never really gets going. Sorry.) 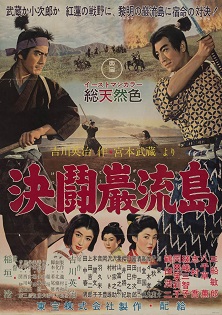