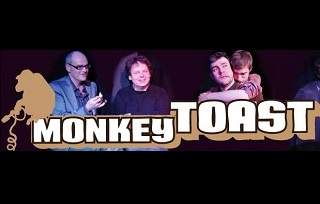 Comedy: After the full-tilt frenzy that was Edinburgh 2016, you might imagine that there’s very little worth saying about Comedy, Food & Drink or Theatre in August outside of the Festival. Well, you’d be wrong. That’s especially the case when it comes to comedy, as the Camden Fringe has been evolving over the years into a major London event, designed specifically as counter-programming to its Edinburgh counterpart. As the top end comics treat the Edinburgh Fringe as a mere warm-up for a national tour, while the lower end ones are forced to avoid it altogether because of the hellacious financial risks, you can see the appeal of a comedy event that doesn’t require them to travel out of the capital. Put it this way: two years ago, Andrew O’Neill Is Trapped Down A Well would have been exactly the sort of show you’d have expected to catch in a room somewhere inside the Pleasance Dome, whereas this year we were able to see him at Aces and Eights and still get the tube home afterwards. Trapped Down A Well - not a metaphor, apparently - is a showcase for the usual delightful O’Neill silliness. This time, however, it's bolstered with a few musical interludes, crossing over nicely with his second job as guitarist for The Men That Will Not Be Blamed For Nothing. He seemed to be enjoying himself immensely at the Friday night performance we were at, commenting on the fact that there were quite a few people of, um, our age in the audience. “Promoters always tell me, you need to avoid older audiences, they don’t like surreal humour. Wouldn’t Spike Milligan have been 100 by now?” Oi! We’re not that old, but fair point.

Food and Drink: It’s a little shocking – though ultimately predictable – to go to the Great British Beer Festival and hear so many people dropping the C word. Real ale brewers are now trying to suggest that their beers were craft long before these hipster types came in and ruined everything with their evil kegs. Meanwhile, hipster types like BrewDog are travelling in the opposite direction with their own experiments in pseudocask. I suspect there are a lot of beer drinkers like The BBG and myself who quite like the overlap between the Real Ale Twats and the Craft Beer Wankers, and this year’s GBBF provides plenty of evidence of that overlap. More interesting hop combinations in the beers, continuing a trend we first noticed last year: more tats and well-tended beards on the punters: more women, generally. The opening night was a little underattended, though that might be down to Southern trains and their ongoing issues. Here are our beers for the night, for those of you who want to play at home (responsibly, mind). I sampled Lees’ CyclHops, Tiny Rebel’s Stay Puft, Stathaven Ales’ Summer, Blue Monkey’s Infinity, Lervig’s White Dog and Titanic’s Chocolate & Vanilla Stout: meanwhile, The BBG tried Brewsters’ Hophead, Tiny Rebel’s Loki, Battledown’s Gin House, Double Top’s Nelson, To Øl’s Cloud 9 and Titanic’s Plum Porter. None of them were especially earth-shattering, but there are certainly worse ways to spend a schoolnight.

Theatre: When Jon offered me tickets for The Threepenny Opera at the National Theatre, I suddenly had a flashback to a previous production at the same venue. I could remember precisely nothing about it other than that I’d seen it. It turns out, looking at the programme for the current production, that the one I'm thinking of happened 30 years ago, and Tim Curry played Macheath. You’d imagine that detail would have stuck, but apparently not. Still, the current iteration of Brecht and Weill’s classic (directed by Rufus Norris) is a perfect hoot. It’s been adapted by Simon Stephens, who’s cranked up the rudeness in the book to just the right degree, and the cast are obviously relishing every minute of it. Rory Kinnear is great as Macheath, but the real scene-stealer is Haydn Gwynne, risking life and limb as she drunkenly hurls herself around the stage as Mrs Peachum. Excellent programme notes, too, as long as you skip the usual wank from Iain Sinclair about East London’s psychogeography, and head straight for Dan Rebellato’s lovely piece on why Brecht is still relevant today. "Some people think the theatre is at its most important when it is at its most solemn. These people are wrong and Brecht knows it." See it in London before it closes on October 1st, or catch it at a cinema near you on September 22nd.

In the meantime, your Simian Substitute Site Of The Month for September 2016 is Monkey Toast UK. It's an improvisational comedy group, franchised off from an original in Toronto. The premise of their show is an intriguing one: a celebrity is interviewed live on stage, and then the Monkey Toast Players thrash out a series of sketches based on topics that came up in the conversation. The cast in the UK version includes some top comedy names like Sara Pascoe and Cariad Lloyd, so these are improvisers who obviously know what they're doing. And if you'd like to learn how to do what they do, they also hold regular improv classes, including one this month.

Sorry if this seems a little rushed this month, but this thing came out today and I need a little time to have a look at it. Feel free to talk about me in the comments while you're waiting.